Jean-Paul Pasqualini and Cedric Rossi are accused of using hand signals to collude at final-table.

The video , edited down to show action from several different hands, shows about 18 hands where Pasqualini and Rossi are alleged to have communicated their hole-card holdings to each other via a pre-arranged signal system, touching body parts as follows:

The video shows multiple hands where the two players declined to give action to each other following the purported signals, including three different hands where Pasqualini held Q-10 and made the same repeated, complex motion of scratching underneath his sunglasses, followed by dragging an index finger across his lips.

However, the most damning hand from the video occurs roughly halfway in, where a short-stacked Pasqualini holds A-K, while Rossi waits across the table with A-A. During the hand, Pasqualini raises and touches his scalp and then forehead, allegedly indicating A-K: 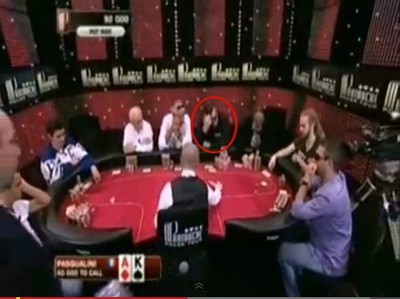 Rossi then re-raises and puts both hands on his scalp, allegedly indicating his A-A monster: 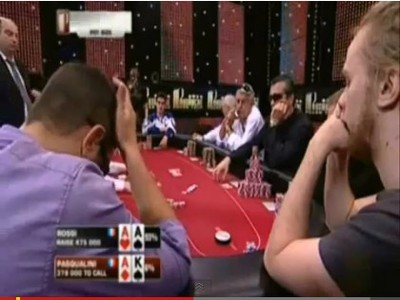 Pasqualini pauses, then inexplicably smiles as he folds his A-K without seeing a flop, despite being short-stacked:

The hand, in which Pasqualini would have been expected to get his chips into the middle and exit via the cooler over 80% of the time, allegedly allowed him to remain in the hunt, after which he went on a hot streak which carried him all the way to the title. Pasqualini eventually collected about $1,430,000 for the win, with Rossi in second for about $870,000.

Partouche Poker
A veteran writer and editor, Haley tracks the poker world on a daily basis and continues working on a book about the UltimateBet and Absolute Poker insider cheating scandals. Her writing history includes thousands of published credits and a stint as the editor-in-chief of one of the world’s largest poker portals.
Article published on February 05, 2013.
/pokerfu.se/96zz