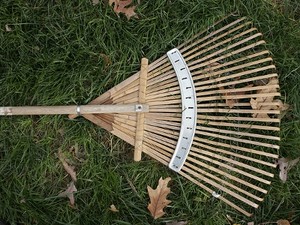 On Wednesday, PartyPoker was scheduled to make some changes to their existing rake structure that would have resulted in higher rake caps for many games. In addition, a move from the “dealt” method of calculating rake paid to the “weighted contribution” method was also scheduled.

With players facing increases in rake caps as high as 150% in some games, they organized a successful mass “sit-out” protest that ground to a halt a lot of the mid-stakes action. In response, PartyPoker has delayed the rake change for 24 hours, with the possibility of scrapping the extra rake cap on some stakes.

Pokerfuse talked with Tim “Harangutang” Matthews, one of the more vocal opponents of the rake structure changes, to find out more.

The idea of a mass “sit-out” protest was organized on 2+2, set to start on Wednesday when PartyPoker had scheduled to apply the rake changes. The lobbies from $3/$6 to $10/20 – the games where the rake cap increases would occur – had many full tables with an average pot size of $0; players were making their displeasure known by occupying seats and refusing to play. Matthews was sitting out at 17 tables.

But strangely, on the tables where players were not sitting out, there was no difference in the amount of rake: the rake changes had not been implemented as planned. Less of a surprise was that there was no announcement by Party. According to Matthews, who has played nearly one million hands at the stakes that were scheduled to have the increase in rake cap, he had not even been notified of the changes by Party; He heard about them while reading poker forums.

Several hours after the protest was in full swing, a PartyPoker representative finally released a statement on 2+2 stating that the planned changes were being postponed a day and that “[b]ased off of player feedback, we are discussing the possibility of not implementing the rake changes for $3/6 and $5/10 NL, and will make a decision in the morning.”

But the players continued to sit out. The protest continued and when asked why, Matthews responded:

Party has given time estimates and dates for addressing issues in the past and hasn’t always followed through with them. We feel the need to show them that this is a very serious issue for us. 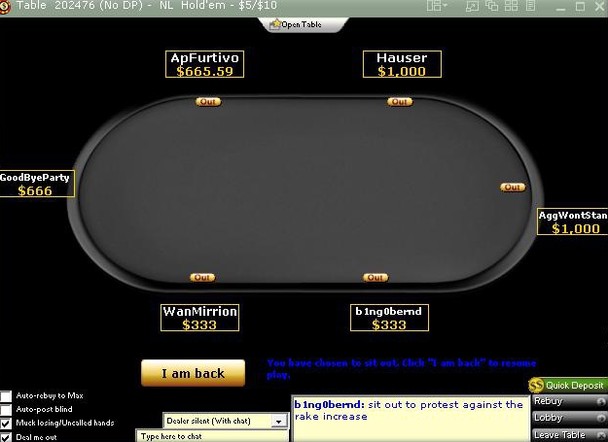 When asked just how serious the consequences of the rake hike would be, Matthews referenced a simulation on 2+2 where a member estimates 45% more rake would be paid playing at $3/$6 and 63% more at $5/$10. This is “significant enough to change winners into losers.” He indicated that the crux of the problem was the changes to the rake structure.

Low to mid-stakes No-Limit and Pot-Limit cash game players will suffer the most under the new structures. Under the old structure, the rake caps for two-handed games – also called heads-up (HU) – with blinds from $3/$6 to $10/$20 was $1. This was already twice as much as the rake for the same games on PokerStars. The planned change would raise the rake caps on these games to $2: four times what PokerStars rakes from these games. With a 5% rake rate at HU games any raise pre-flop that is called at $5/$10 or higher will invoke the maximum rake.

The excessive rake for two-handed games will have a rippling effect on the health of the 6-max and full ring games as well by crippling game creation. Many players prefer to play at tables that have four or more players, but most of the time those tables will only fill once a two-handed game has expanded to three-handed. So, often players of similar skill levels will play each other to induce others to join. Matthews explained that doubling the rake caps “creates a very strong incentive to never start games unless there is a weaker player.”

The four-handed games in that same stake range will see a 150% increase from $2 to $5. The caps at the 5-handed to full ring games will be increased from $3 to $5. These changes put many of PartyPoker’s rake caps among the highest of any of the major poker sites.

A small consolation for paying more rake can be realized by participating in PartyPoker’s loyalty program. The Palladium Rewards program awards players two Party Points for each dollar paid in rake and tournament fees. The higher the level a player achieves within the program, the better rate of return they receive when converting their Party Points into cash and bonuses. But how do poker sites determine how much rake a player has paid? 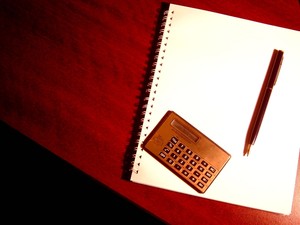 For the dealt method of calculating rake paid, the credit for the rake paid is divided equally among all players dealt in to the hand. This means that a player that folds his hand pre-flop and a player that goes to showdown – even though they have contributed different amounts to the pot from which the rake is deducted – are credited with the same amount of rake paid. This method allows tighter players to accumulate higher rake paid totals which in turn allow them to generate more rakeback, clear bonuses faster and reach higher levels in loyalty programs.

Since PartyPoker issues players two Party Points for each $1 of rake they pay, the new method will offer greater rewards for those players that are more active, play bigger pots, and generate more rake for the site. Matthews believes these tendencies are commonly found in recreational players. And, by shifting the amount of rake paid towards players that will not achieve the highest levels in the loyalty program, the Party Points issued to the recreational players as a result of the new rake paid calculations will be redeemed at a lower rate of return resulting in more profit for PartyPoker.

However, the planned changes to the rake structure will set PartyPoker apart from the rest of the industry: only not in a good way in the eyes of the poker players. At a time when a large group of players that were orphaned by the closing of FTP are looking for a home, creating conditions that threaten the liquidity of your site and alienating a large portion of your customer base just seems like bad business. Last month Party seemed to relish in the opportunity to attract new players by offering no rake multi-table tournaments (MTTs). Today their vision seems shortsighted.