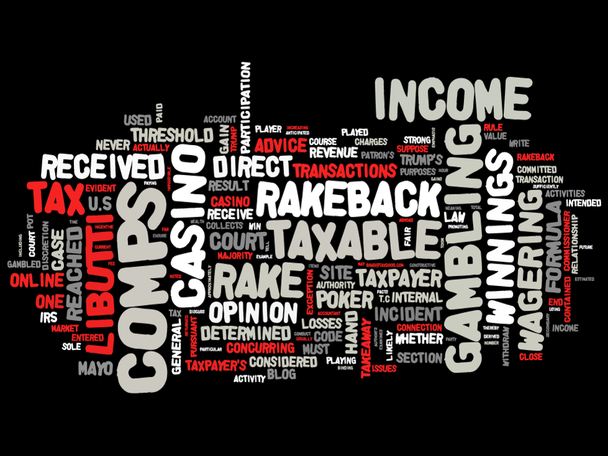 We start with the general principle from section 61(a) of the Internal Revenue Code: Gross income is defined as “all income from whatever source derived.” Essentially, all income is taxable income unless specifically exempted.

This is the straightforward stuff. Income received from these activities are clearly accessions to wealth and thus is taxable.

I write “likely” only because there is no court opinion or IRS authority directly addressing whether rakeback is taxable. Let’s make sure we all understand what rakeback is.

First, what is “rake”? Rake is money the casino charges and collects for each hand of poker played. Usually, rake is determined by a percentage (5-10%) or a flat fee, taken from the pot after each hand is completed.

What is “rakeback”? Some online poker sites or their affiliate partners return a part of the rake a player pays to provide an incentive for the player to continue playing on that site. The returned rake is the rakeback.

Continuing the example above, further suppose the online casino rewards my loyalty to the site by crediting my account at the end of 2011 20% of all the rake paid to the site during 2011. My rakeback for 2011 is $100. The rakeback should be treated as if the casino never collected this portion of the rake in the first place, thereby increasing my gambling winnings for the year by $100.

Takeaway #3: Casino comps are taxable income (determined by fair market value) as gambling winnings if the comps received are incident to direct participation in wagering transactions.

In Libutti, the taxpayer gambled extensively, mainly by playing craps at Trump’s casino in Atlantic City, NJ. Over the course of three years, the taxpayer received from the Trump casino over $2.5 million in discretionary comps, including automobiles, vacations, jewelery, premium champagne, and entertainment tickets. Trump’s senior management determined the type and amount of the taxpayer’s comps using their sole discretion.

The court held the taxpayer’s comps were sufficiently related to his gambling losses. Because the taxpayer received the comps incident to his direct participation in wagering transactions, the court reasoned, the relationship between his comps and his wagering was close, direct, evident, and strong.

Would the result be different if the comps were determined by formula? The court noted that the casino in some cases transferred comps

by a formula that allowed each patron to receive approximately 50 percent of Trump’s anticipated win with respect to him or her. The formula took into account a patron’s average bet, the hours that he or she gambled at the Casino, the estimated number of hands that he or she played per hour, and a factor set by Trump to reflect the fact that the odds were in its favor.

Although the court did not state comps received pursuant to this formula would be considered taxable income as gambling winnings, I believe it is clear that the fair market value of such comps would be includible as gambling winnings. The relationship between a patron’s wagering activity and comps received pursuant to the formula seems far more “close, direct, evident, and strong” than the casino’s sole discretion used in the taxpayer’s case.

Despite some recent scrutiny, Libutti is current law. In the U.S. Tax Court case Mayo v. Commissioner, 136 T.C. 4 (2011), which was covered in a previous article, the concurring opinion questioned the vitality of Libutti.

In a footnote, the majority opinion in Mayo described Libutti as an exception to the general rule that “gains from wagering transactions” within the meaning of section 165(d) “must be the actual product of wagers entered by the taxpayer.” The Libutti standard includes casino comps as gambling winnings if the comps received are “incident to” direct participation in wagering transactions. Compare Libutti to the majority opinion in Mayo, which stated (emphasis added):

Generally, it is not sufficient that the gain arise merely in connection with the conduct of wagering activities [to be considered a gain from a wagering transaction]; the gain must be the direct result of a wager entered by the taxpayer.

The concurring opinion in Mayo wondered whether there is a material difference between “incident to” and “in connection with,” and whether Libutti could survive as an exception to the general rule. Only time will tell. Keep in mind a concurring opinion is not binding law. Until overruled by a future case or statute, Libutti remains good law.

Next week we examine some tax issues facing U.S. residents who move abroad to play poker.

Author’s note: I must remind all readers that it is impossible to offer comprehensive tax advice on the internet. Information I write on this blog is not legal advice, and is not intended to address anyone’s particular tax situation. Should you seek such advice, consult with a tax professional to discuss your facts and circumstances.

Tax
Brad Polizzano is a tax attorney and accountant in New York, concentrating his practice in poker and other gaming industry matters. He blogs about tax issues at taxdood.com, is @taxdood on Twitter, and can be reached by e-mail at brad@taxdood.com.
Article published on March 21, 2012.
/pokerfu.se/y8my