Taxation of Gambling: US Tax Implications of Black Friday 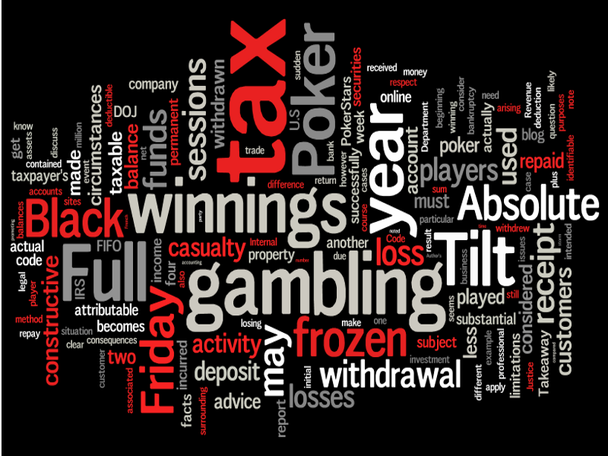 Last week I emphasized that in general, online gambling winnings are taxable when credited to the taxpayer’s online casino account, and not when the funds are actually withdrawn and deposited into the taxpayer’s bank account. This result is due to a doctrine in the tax code known as constructive receipt.

This week we consider whether the circumstances surrounding Black Friday change this analysis, if at all.

Let’s recap what happened and where things stand today. On April 15, 2011, customer funds on the sites Absolute Poker, Full Tilt Poker, and PokerStars became frozen and inaccessible. To date, only PokerStars has repaid its customers. Absolute Poker is in bankruptcy, and may or may not repay its customers. Full Tilt has agreed to forfeit its assets to the U.S. Department of Justice, and French investment firm Groupe Bernard Tapie is currently seeking to purchase the assets from the DOJ. It has been reported that the DOJ will repay Full Tilt’s customers, but nothing has been finalized.

It’s no surprise the number one tax question on the minds of poker players is how to treat the frozen funds. Of course, PokerStars customers have been fully repaid, so the tax treatment of gambling winnings for its customers is no different for 2011 as compared to prior years.

So the question becomes, does constructive receipt still apply to winnings frozen on Absolute Poker or Full Tilt Poker for the 2011 tax year?

In the amended civil complaint filed by the DOJ against Full Tilt Poker, the company had in late March 2011 less than $60 million in its bank accounts, yet it owed $390 million to its players. The players haven’t seen a penny since Black Friday because the company doesn’t have the money. The constructive receipt tax code regulations state if a taxpayer’s control of receipt is subject to substantial restrictions or limitations, then there is no constructive receipt. It seems pretty clear to me that the receipt of frozen Full Tilt player funds have been subject to substantial limitations.

The Department of Justice has not made any allegations regarding Absolute Poker’s finances. The company is in bankruptcy, however, so it similarly appears that these frozen funds also have been subject to substantial limitations.

Of course, any gambling winnings successfully withdrawn from Full Tilt or Absolute Poker accounts would be considered taxable income because they were actually received.

Some poker players, perhaps most, consider their frozen funds long gone. Does this mean a poker player may claim a deduction for the unpaid Full Tilt and Absolute Poker funds?

Takeaway #2: A frozen balance on Full Tilt Poker and Absolute Poker would likely not be considered a deductible loss for the 2011 tax year under the Internal Revenue Code.

“But I’m not getting my money back,” you say. To this point, we don’t know that with certainty. And that makes a difference for tax purposes.

The tax code allows a taxpayer to take a deduction for a loss arising from a “fire, storm, shipwreck, or other casualty” incurred with respect to property that is not used in a trade or business. Losses incurred with respect to property used in a trade or business do not require a casualty. The IRS has defined “casualty” as “the damage, destruction, or loss from property resulting from an identifiable event that is sudden, unexpected, or unusual.”

We should all agree that Black Friday qualifies as a sudden identifiable event. Although we have a casualty, the loss arising from the casualty is not necessarily permanent. As noted above, Full Tilt or Absolute Poker players may still get repaid. Once an official announcement is made that players will not get repaid, then the loss becomes permanent and deductible in that year. Until then, the loss has not been incurred. We know 2011 is not that year. 2012 may or may not be that year.

Takeaway #3: Consult a tax professional to discuss how the events surrounding Black Friday apply to your own facts and circumstances.

As I have said before, actual withdrawal and deposit amounts on online gambling sites in most cases do not mirror actual winnings or losses. Winnings and losses must be kept track by session. Applying this concept to Black Friday balances, the calculations can get messy. This week’s post concludes with an example I put together to illustrate:

Suppose I am an amateur gambler. As discussed, amateurs must report gambling winnings and gambling losses in separate places on the tax return.

Let’s say 2010 was the first year I played on Full Tilt, initially depositing $100. During the year, I played four “sessions.” I had two winning sessions of $25 and $75, and two losing sessions of $30 and $60. Throughout the year, I successfully withdrew $50 from my Full Tilt account. On my 2010 tax return, I claimed $100 in gambling winnings and $90 in gambling losses. Note that the $50 withdrawal has no impact on my tax consequences for the 2010 year.

For the 2011 tax year, are any of my gambling winnings or losses reportable? As I said above, any gambling winnings that were successfully withdrawn would be considered taxable income because they were actually received. In my situation, however, that wasn’t the case. Why?

The $50 withdrawal in 2011 was not attributable to the 2011 gambling activity, but to the $100 deposit I made in 2010. To arrive at this result, I applied an accounting method called “First-in first-out” (FIFO), which is often used to determine the cost basis of securities sold. Before making the 2011 withdrawal, I had recovered only $50 of the $100 initial deposit made in 2010. Since the 2011 withdrawal was less than or equal to the remaining portion of the 2010 deposit, none of the $50 withdrawn in 2011 was attributable to the gambling activity in 2011. Therefore, due to a lack of constructive receipt of the 2011 gambling winnings, I would not report any gambling winnings or losses in 2011 attributable to Full Tilt. In addition, I would not report the $60 frozen balance as a loss because it was not considered permanent as of the close of the 2011 tax year.

I must note that there is no direct legal precedent that explicitly says to use FIFO when ascertaining the tax consequences in the context of Black Friday. Considering FIFO is sometimes used for computing the gain on securities purchased at different times, an activity arguably similar to gambling activity, it seems like a reasonable method to me. Some may say there’s no difference between gambling and investing in securities. In both cases, one deposits a specified sum and at some future time either cashes out or loses the entire investment once the sum becomes worthless.

The example is overly simplistic with only four sessions played each year. But we need to start simple in order to fathom how complicated actual situations may be. That’s why I need to make it clear that each person’s case depends on the particular facts and circumstances.

Next week we will cover tax issues associated with staking activity.

Author’s note: I must remind all readers that it is impossible to offer comprehensive tax advice on the internet. Information I write on this blog is not legal advice, and is not intended to address anyone’s particular tax situation. Should you seek such advice, consult with a tax professional to discuss your facts and circumstances.

Tax
Brad Polizzano is a tax attorney and accountant in New York, concentrating his practice in poker and other gaming industry matters. He blogs about tax issues at taxdood.com, is @taxdood on Twitter, and can be reached by e-mail at brad@taxdood.com.
Article published on March 07, 2012.
pokerfu.se/mhv4

The Michigan Classic is Coming Back to PokerStars MI this Sunday

Poker players in Michigan have something to get excited about this October: PokerStars MI has announced the return of…

Breaking: PokerStars to Celebrate 20 Years With a Month of “Big 20” Special Promotions

This year, online poker giant PokerStars is celebrating its 20th anniversary. To mark the occasion, the room will be…