For Playtech, Poker is All About the Cross Sell

Revenue from its iPoker network falls another 19% in 2016.

Playtech’s full year financial results for 2016 show revenue from online poker declining 19%, but the company stated that it remained dedicated to the poker product.

“We believe poker remains an important part of the full product offering of operators,” the company stated but added that “it remains a low margin vertical and accordingly operators focus on investing in cross selling into casino.”

Playtech operates iPoker, a network of online poker rooms that remains larger than its primary rival MPN, owned by Microgaming. However, independent poker rooms like partypoker and 888poker are larger, and all of them combined are smaller than industry leader PokerStars.

Latest figures from Playtech show total revenue from online poker in 2016 at €9.1 million, a drop of almost 19% on the €11.2 million generated in 2015, or 17% on a constant currency basis. In the last six years, revenues from poker have declined three-fold. 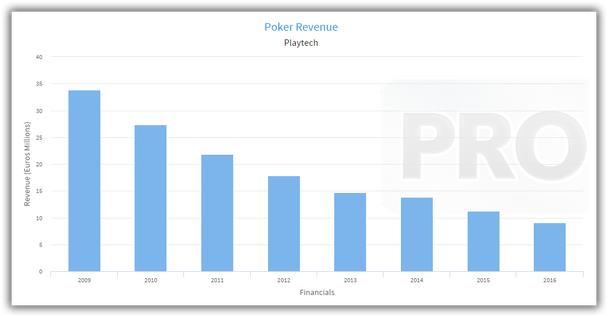 The trend is mirrored in cash game traffic, tracked by independent monitor PokerScout and available on the PRO Data platform. The decline in recent years is even more pronounced, as players move away from cash games to new tournament games like Twister. 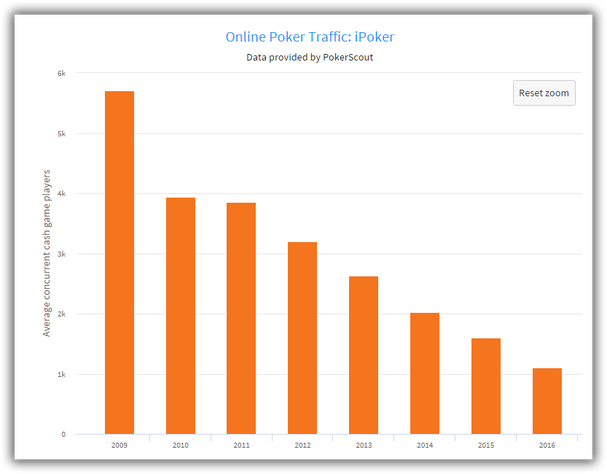 Despite this clear trend, Playtech did state the importance of maintaining the product vertical—critical as it is in attracting players to online gambling.

Playtech “gains from the natural conversion of certain players to the poker product,” it was stated, adding that poker will continue to attract recreational players to the product.

This effect was particularly important in regulated markets, like France, where casino games were not permitted, it was stated. Still, cash game data show that performance was even weaker there, with traffic down 35% year-on-year on iPoker France. The network has only two skins, Betclic and Unibet.

The company is “utilizing its cross-product expertise to develop new poker experiences such as an Age of the Gods themed poker experience”—hinting that a hybrid poker/slots game may be under development.

This article originally appeared on Poker Industry PRO and has been republished here as a courtesy to our readers. Please visit Poker Industry PRO for more information on the industry intelligence services that are available, or email sales@pokerindustrypro.com to get a free trial.

In what is a first in the history of regulated online poker in Europe, the monopoly online poker providers in Austria…

For Playtech, Poker is All About the Cross Sell

From today, Playtech customers in Belgium will no longer be able to play poker on any non-Belgian licensed iPoker poker…

Playtech Founder Wants $100 Million to Compete with Skrill and NETELLER