Ultimate Poker posts a 6% increase in internet poker revenues in spite of the short month.

The partnership of Caesars and 888 has pulled even closer to the market leading pairing of partypoker and Borgata in revenue generated from online poker in New Jersey.

Only three percentage points and approximately $98,000 in revenue separated the two market leaders in February, according to revenue figures released Wednesday by the New Jersey Division of Gaming Enforcement.

Partypoker/Borgata, which share a player pool, jumped out to an early lead in New Jersey capturing almost 60% of the poker revenue in its first full month of December 2013.

Caesars/888, which operate on separate networks, made strides in January, upping its share from 37% in December to 44% in January. As of February, party/Borgata generated half of all internet poker revenues, with Caesars/888 coming in at 47%.

The total revenues from poker came in at $3.1 million—down approximately 10% from the $3.44 million in January; however, with February having three less days, the numbers actually reflect a 2% increase on a per day basis.

Overall online gaming revenue increased 8.9% from January to a total of $10.3 million. The number of internet gaming accounts created also rose, up 25.5% from January to 248,241 total since the soft launch on November 21, 2013.

The only increase in poker revenue was recorded by Ultimate Poker, posting greater than a 6% increase on a month-to-month basis and an almost 18% increase on a per day basis—the success of its NO-verlay promotion launched last month being a likely contributor. 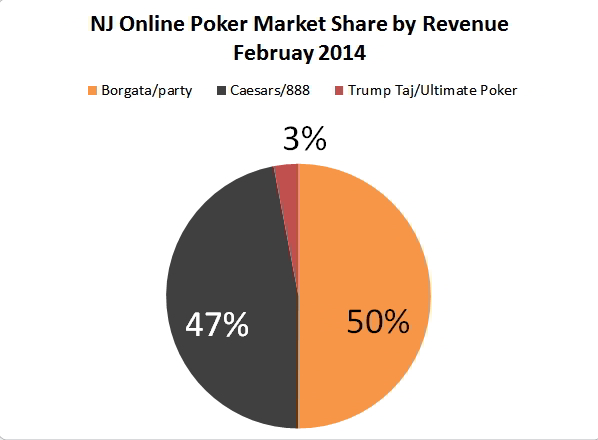