The launch of PokerStars grew online poker revenue in New Jersey by 11% in 2016.

The New Jersey online gaming market saw significant growth in both online poker and casino games in 2016. In poker, the market grew by 11.3% year-on-year, with the declines at the established operators more than offset with the launch of PokerStars.

The year got off to a rough start, with both WSOP/888 and the partypoker/Borgata networks posting declining year-on-year revenue numbers. Then came PokerStars, partnered with Resorts, which launched mid-way through March. For the remainder of the year, combined revenue across all operators each month was up on the same period in 2015.

While from April onward the Resorts/PokerStars partnership boasted the highest revenue each month, the Borgata/partypoker pair just out-pipped its rival in total revenue for the year. 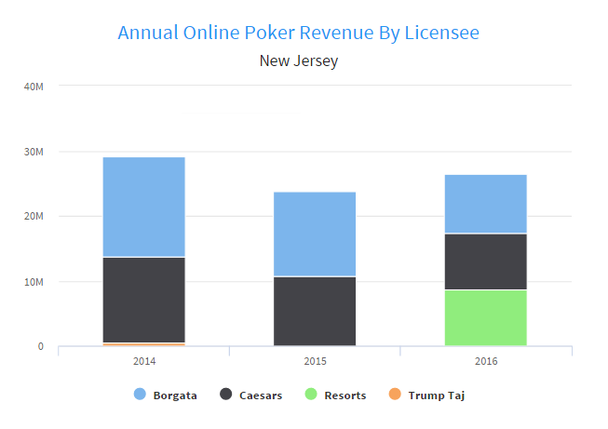 The year ended on a flat month. Only the combined efforts of WSOP and 888 under the Caesars license produced month-on-month gains; the other two declined. A total of $2.1m was collected in the final month of the year, up on November by just 0.8%, similar to the 1.36% jump from November to December in 2015. 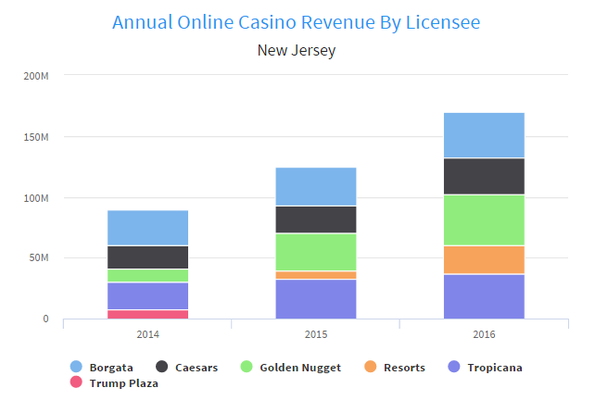 Golden Nugget was the biggest success story of 2016 in the online casino games sector, leading all five active operators in the space with a 29.4% market share based on revenue. To close out the year, Golden Nugget smashed its own previously held record of approximately $4.1m set in October by generating nearly $4.8m.

The market leader derived $42.2m in revenue from online casino games last year. Borgata and Tropicana finished neck and neck in second and third respectively, with Caesars slightly behind in fourth and Resorts bringing up the rear.

This article originally appeared on Poker Industry PRO and has been republished here as a courtesy to our readers. Please visit Poker Industry PRO for more information on the industry intelligence services that are available, or email [email protected] to get a free trial.

As WSOP.com is peaking at its all-time high for traffic in the wake of the coronavirus lockdown, the popular US online…

Partypoker US Network Gears Up for Another Online Tournament Series

Following the successful run of the Spring Poker Open Online Series in April, the partypoker US network has announced…