The PokerStars Team Pro is the first player of the modern era to win a bracelet after a victory in the Main Event.

The run of first time bracelet winners came to an end in Event #31 as Brett Shaffer added a second bracelet to his collection. His first also came from a $1.500 No-Limit Hold’em event at last year’s WSOP. 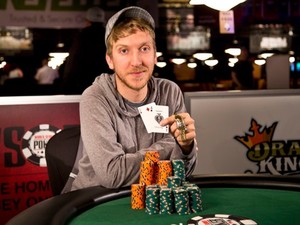 The event captured more than its fair share of big name players, with Vanessa Selbst, Dominik Nitsche, Antonio Esfandiari, Greg Raymer, and Liv Boeree all busting out before the money.

The day started with Matt Stout as chip leader, but again the advantage didn’t carry through to victory. Matt made the final table but had to be satisfied with a third place finish and $170k.

The final two were Shaffer and Ronald Sullivan who booked the largest cash of his career at $258k.

A bad beat story went along with his second place finish. All the chips went in pre-flop with Sullivan holding A-4 and Shaffer the underdog with A-2. Not only did a two hit the felt on the flop, but a another two came on the river to give Shaffer trips and the victory.

The day brought another second bracelet winner in the shape of PokerStars Team Pro and 2009 Main Event winner Joe Cada.

Cada is the first player of the post-Moneymaker era to win a bracelet after winning the Main Event, adding another statistic to his record of being the youngest player ever to win the most valuable tournament in poker.

November Niner and fifth place finisher from the 2012 Main Event Jeremy Ausmus provided the heads up competition out of an original field of 264.

The critical hand of heads up play was a flip—both players all-in pre-flop with Cada’s 8-8 against A-J suited. After that win Cada could not be stopped.

A few hands later Ausmus held pocket jacks, the same hand he’d used to bust JC Tran who finished in fourth place. This time when the chips went in the jacks were the underdog, as Cada showed Q-Q.

Ausmus’ second place earned him $414k, while Cada picked up $670k to bring his lifetime live tournament winnings over the $10m mark.

The $1k event couldn’t make it down to a finish and left 10 players to return today.
Dutch Boyd sits in third place looking for his third bracelet—his first came in 2006, his second in 2010 and he must be hoping that the four year cycle will hold good and bring him another this year.

Chip leader Will Givens already has two cashes this year, in Events #24 and #29. If he can hold on, this will be his first bracelet and biggest career cash.

The chip leader going into the final day is Aleksandr Denisov, who may not have a bracelet, but managed a 7th place finish in this year’s PokerStars Caribbean Adventure (PCA).

Daniel Negreanu’s bracelet bid ran out of steam and he finished in 10th place.

170 players survived day 1, with Sam Trickett the chip leader going into day 2. Jeff Madsen, Sorel Mizzi and David Pham all have top 15 stacks with a lot of play still to come.

The fascination of 2-7 Draw Lowball has again brought out Phil Hellmuth in search of that elusive bracelet number 14. Phil sits in 11th place by chip count, but tough competition remains in the 38 players who got through Day 1.

Brian Rast is the chip leader with Joseph Cheong sitting in second place.

Antonio Esfandiari Brian Rast Bryn Kenney Dominik Nitsche Greg Raymer J.C. Tran Jeff Madsen Jeremy Ausmus Joseph Cheong Kansspelautoriteit Liv Boeree Netherlands Phil Hellmuth Sam Trickett Sorel Mizzi Vanessa Selbst WSOP
Jocelyn Wood, Editor Joss is a graduate in English from the University of Birmingham and has a Master’s Degree in Organisational Development from the University of Manchester. His career path has taken him from the British Army, through business & finance to seven years as a successful professional poker player. His experience of the European Union, law, accounting, finance, regulation and online poker provide the basis for his insights in the PRO specialist categories of Industry and Law & Regulation. As CEO he steered his own company through full Financial Services Authority regulation, and was asked by Morgan Stanley to take their UK mortgage business through the same process. Although British, he lives in Arequipa, Peru, set high in the mountains and surrounded by volcanoes. He is married to a Peruvian and has three children.
Article published on June 17, 2014.
pokerfu.se/t3kp

When WSOP went live in Michigan less than two weeks ago, it accompanied its launch by announcing a four-time bracelet…