Four bracelets in all were awarded this weekend which also marked the start of the $50,000 buy-in Poker Players Championship.

The first bracelet of the weekend went to Sean Dempsey, as yet another pro-packed final table competed for the honor. 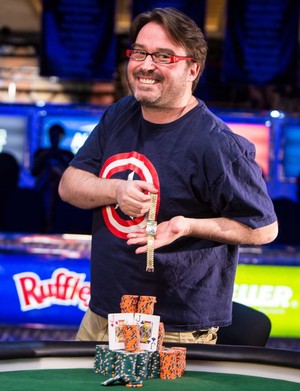 Finishing in 7th, Layne Flack failed to win a seventh bracelet, and Nam Le, with over $6 million in live tournament winnings saw another bracelet opportunity slip from his grasp. Le went out in 6th, one place closer than he got in last year’s Event #44: $3,000 No-Limit Hold’em.

Dempsey was no stranger to the pressure of a WSOP final table. Last year he came 7th in a $10k Pot Limit Omaha event.

The day’s initial chip leader, Jacob Schindler, managed to keep his chips until busting out in third, leaving Ryan Jaconetti to play Dempsey for the bracelet.

With competition including Phil Ivey, Daniel Negreanu and Eric Seidel, the chances of this event going to a first time bracelet winner looked thin, but 25 year old Davide Suriano beat them all. 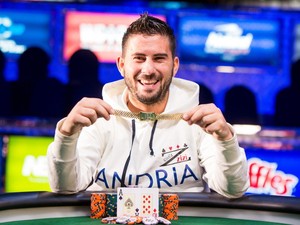 The first two players he had to beat were Scott Seiver and Daniel “Jungleman12” Cates. Five more heads up opponents bit the dust before Italian Suriano could rightfully claim his first WSOP bracelet and the $335k prize money for first place.

Sam Stein missed out on a second bracelet, losing in a short final match to Suriano that lasted 36 hands.

It has been seven years since he last won a bracelet, but Robert Mizrachi has repeated his success in the event that made the most demands on all around poker skill—the Dealer’s Choice.

Melissa Burr just missed out on her third final table of this year’s WSOP, and Jennifer Harman finished one place behind her in tenth.

Four of the six final table players were previous bracelet winners—Mizrachi, Bill Chen, Daniel Idema and Frank Kassela. And the first three to fall were those looking to add to their collection—Mizrachi, was the only one who survived.

Mizrachi polished off third placed finisher Shane Abbott in style, when the board delivered the two aces he needed to make quads.

Aaron Schaff went into the heads up phase as chip leader, but Mizrachi switched games regularly when he had the button, and the strategy paid off. Mizrachi took home $147k and the bracelet with Schaff collecting $90k as runner up.

The second half million dollar payday of the weekend went to Michael Drummond who was playing his first event of the series. 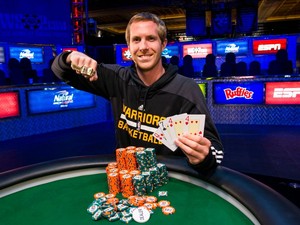 Drummond’s win also brought him his first bracelet, and the pleasure of playing a WSOP final table with Phil Laak as one of his opponents.

Laak was the day two chip leader, and made it to the final table only to be the first to be eliminated.

Drummond found himself the short-stack with ten players to go, but was the chip leader by the time play got down to heads up.

Darius Studdard ended the tournament on an unlucky hand when he flopped a set of threes at the same time as Drummond hit a set of fours. The turn and river were no help, and Studdard went home with the $334k second place money. 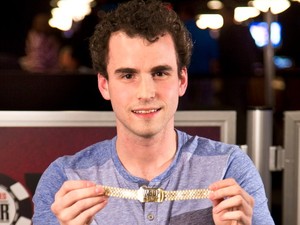 The win in this smaller event produced just shy of $200k, but the professional recognition of winning a second bracelet makes a nice bonus.

Jeff Lisandro and David Chiu both made the final table, both with five WSOP bracelets to their name.

Brandon Shack-Harris, who won his first bracelet this year in Event #3: $1k Pot-Limit Omaha, and also registered a second place finish in Event #18: $10k Seven Card Razz, also made the final table, but couldn’t improve on either of those finishes as he went out in third.

Yegor Tsurikov took second place for his second WSOP cash, the first was as long ago as 2011.

Brandon Ageloff ended the day with the chip lead as only 15 players remain out of the 1,914 who started the event. Angeloff has lifetime live winnings of $44.6k—this could be a very big event for him if he can hold on to one of the top slots.

The $1k event has played down to 144 after 1,841 players entered for the Sunday tournament.

Ari Engel lies fifth in chips at the end of the first day, but there are many well known names still in contention further down the list.

Phil Ivey and Daniel Negreanu are there, but so is everyone else.

One notable survivor of the first five levels of play is Talal Shakerchi.

Shakerchi is a business man who has made some very impressive finishes including in the $100k buy in London WPT Alpha8. He has $1.7 million in live tournament cashes and won the Season 9 PokerStars EPT in London for over $650k.

Chip leader at the end of day 1 is Matt Glanz, who has not yet won a WSOP bracelet, but has cashed six times in the 2014 Series so far.

Ari Engel Daniel Negreanu Jacob Schindler Jeff Lisandro Jennifer Harman Phil Ivey Phil Laak Scott Seiver WSOP
Jocelyn Wood, Editor Joss is a graduate in English from the University of Birmingham and has a Master’s Degree in Organisational Development from the University of Manchester. His career path has taken him from the British Army, through business & finance to seven years as a successful professional poker player. His experience of the European Union, law, accounting, finance, regulation and online poker provide the basis for his insights in the PRO specialist categories of Industry and Law & Regulation. As CEO he steered his own company through full Financial Services Authority regulation, and was asked by Morgan Stanley to take their UK mortgage business through the same process. Although British, he lives in Arequipa, Peru, set high in the mountains and surrounded by volcanoes. He is married to a Peruvian and has three children.
Article published on June 23, 2014.
/pokerfu.se/wwzp

Christmas may be over, but the festive mood remains on WSOP’s real money online poker platform. After offering…