The World Series of Poker $1 Million Buy-In Tournament: The Big One for One Drop

David Einhorn hands his chips to Sam Trickett after an early bad beat sends him to the rail.

Hedge fund manager David Einhorn now has the best bad beat story in poker after exiting the $1 million buy-in Big One for One Drop after just 45 minutes of play.

Einhorn three bet a Sam Trickett pre-flop raise, Trickett called and the flop came down 2-J-6. The two were well aware of each other’s game having finished 3rd and 2nd respectively in the first One Drop event in 2012, so Trickett’s call of Einhorn’s continuation bet was not unexpected.

Einhorn had flopped a set of jacks, and the three of spades on the turn filled out the rainbow board texture and looked as unthreatening as any card could be.

Trickett flipped over 4-5 suited—the turn had filled his inside straight—and Einhorn could only look on in shock.

Esfandiari Tries for Two in a Row

Such stories are inevitable in a tournament with this buy-in which has attracted such a high profile field. The event was created by Canadian billionaire, Guy Laliberté, founder of Cirque du Soleil, and exists to generate money for his One Drop charity. 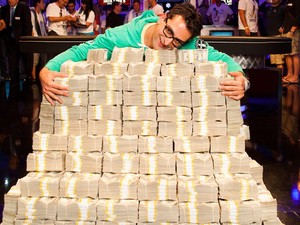 The first event created a WSOP sensation as Antonio Esfandiari won it for a record $18.3m payout. Trickett came second for $10.1m and David Einhorn donated his third place winnings of $4.3m to charity.

The “Big One” is planned to be held every two years—this year is the second time the event has been held, and it had slots for 56 entries. 42 players managed to find the necessary one million bucks for the buy-in—either from very deep pockets or by selling pieces—in some cases a large percentage—of their action.

Total entries are down from the 48 of the 2012 event, but special factors affect a tournament such as this so it would be unwise to draw conclusions that the event is in any way less successful as a result.

Gabe Kaplan Takes on the Young Guns of the Internet

Some unexpected names appear in the entries—former High Stakes Poker presenter Gabe Kaplan has a seat, as does Jean-Robert Bellande, who received a less than lukewarm response when he offered Dan Bilzerian 5% of his action.

Doug “no longer to be known as WCGRider” Polk has invested the $250k he took from winning Event #23: $1,000 Turbo No-Limit Hold’em, plus some of his online cash game winnings in the expectation of another big score.

Phil Ivey is going for a big money win to add to the bracelet he won at the weekend, and Daniel Negreanu is going to try to take the bracelet after his close call coming second in Event #13: $10k No-Limit 2-7 Draw Lowball.

Daniel has cashed in eight events so far in this World Series, three of them in tenth, and that is where he stands at the end of Day 1 in the One Drop—tenth in chips with 31 players remaining.

Jean-Robert Bellande and Guy Laliberté bring up the rear of the field with around a million chips each. Even if he doesn’t make the final table himself—and he did last time finishing in fifth—Guy can be expected to provide some dramatic entertainment from his Cirque resources to give the occasion the right ambience.

The event is scheduled for three days and pays out eight places—more than $15 million will go to the victor.

One Drop WSOP
Jocelyn Wood, Editor Joss is a graduate in English from the University of Birmingham and has a Master’s Degree in Organisational Development from the University of Manchester. His career path has taken him from the British Army, through business & finance to seven years as a successful professional poker player. His experience of the European Union, law, accounting, finance, regulation and online poker provide the basis for his insights in the PRO specialist categories of Industry and Law & Regulation. As CEO he steered his own company through full Financial Services Authority regulation, and was asked by Morgan Stanley to take their UK mortgage business through the same process. Although British, he lives in Arequipa, Peru, set high in the mountains and surrounded by volcanoes. He is married to a Peruvian and has three children.
Article published on June 30, 2014.
/pokerfu.se/bkb2

Six months after the regulated Ontario online poker market first opened up, WSOP Ontario has finally launched in the…

PokerStars has retaken the top spot for cash game activity in Ontario ahead of WSOP’s much-awaited launch,...

The schedule for PokerStars’ first-ever Championship series in Ontario has been revealed. As previously announced,...

The newest craze in the poker world is the Mystery Bounty format, where bounty payouts are randomized, with some…

WPT Global is the newest player in the global online poker game, but the operator has established quite a presence in…