Driven by requests from players, PokerStars merchandise was made available at the Barcelona stop of the European Poker Tour late last month with the debut of the Stars Store.

A variety of PokerStars branded products including apparel, hats, water bottles, keychains, electronic gadgets and an assortment of poker paraphernalia went on display August 21 at the pop-up Stars Store inside Casino Barcelona.

Just outside the main tournament room, the temporary retails space was strategically positioned to benefit from the exposure to the swarms of spectators and poker players entering, leaving and on break from the EPT events.

Some of the hottest selling items included items from the EPT product line, a Stars Coin card protector and a classic PokerStars branded hoodie. 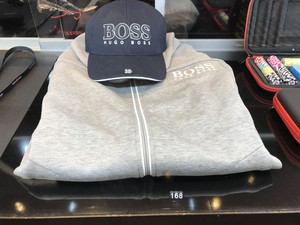 One of the more popular new items under the PokerStars/Hugo Boss partnership was the co-branded hoodie, which just days after the pop-up Stars Store opened, had managed to nearly sell out, despite its €168 price tag. As a point of comparison, the popular classic PokerStars hoddie was selling for (€38).

Still, from the dozens of the sleek Euro-styled zipup sweatshirts that that were stocked for the opening of the store on Tuesday, only two remained by Saturday, and more than a week remained before the crew would break down the store in preparation for its next appearance.

The Hugo Boss co-branded range also includes a traditional t-shirt, a knit pullover and a baseball cap. The PokerStars branding on the items has a low profile (for example, the PokerStars/Hugo Boss hoodie has a very small PokerStars spade on the back right shoulder) and many of the items are available in different color combinations, with potentially even more variety of colors to be offered in the future.

Expansion of the Stars Store

The Stars Store will soon be available to customers beyond those that attended EPT Barcelona. An online version of the store is slated to go live soon and will offer many of the same items that were available for purchase in Barcelona, though it is uncertain if the PokerStars/Hugo Boss line will be available online or exclusively at live pop-up locations.

Though merchandise could only be purchased with cash or card at the live store, the online store is expected make items available to players that would like to use StarsCoins, the company’s loyalty program currency.

The Stars Store will also be featured at future live events including the upcoming MEGASTACK event in Namur, Belgium later this month and EPT Prague in the Czech Republic.

EPT Prague is scheduled to run December 7-18, 2018, and the Stars Store at that series could prove to be even more popular than it was in Barcelona due to its proximity on the calendar to the holiday season.

Beyond a virtual version of Stars Sore and additional pop-up locations, the merchandise lineup may be expanded to include exclusive items for each of the live pop-up locations.

Following on the recent change to their welcome offer in Michigan, PokerStars has decided to change its welcome bonus…

PokerStars, one of the leading licensed online poker operators in regulated US markets, has improved the odds of…

Michigan Online Poker: An Early Look at how PokerStars’ MICOOP is Performing