Dispatches from the Bahamas, Day 1: Bling, Business and Bustouts

From limo to lobby, swag bags to stack-offs, pokerfuse is here to bring you the alternate action from the PSPC in the Bahamas.

Team pokerfuse is on the ground for the next two weeks to bring you coverage direct from the PokerStars Players NL Hold’em Championship (PSPC) and the PokerStars Caribbean Adventure (PCA).

Along with our regular coverage, we’ll be bringing you everything we’re seeing and hearing from the halls of the Atlantis Resort & Casino direct to you through social media and our sites. Hoping to go beyond the usual news, we’ll be looking to bring you side stories and alternative action, from the halls, the resort and beyond.

Team Pokerfuse arrived in the Bahamas fashionably late—landing on the Island a couple of hours after Day 1 action got underway. After a swift journey from the airport, we landed directly into the midst of the action.

1/ The Atlantis is still rolling with their old-school fleet of stretch limos which is one of the few remaining way… https://t.co/e1KaYZOxnl— Nick Jones (@pokerprojones) January 07, 2019

The feeling on the ground appeared is one of immediate frenzied action. As reported yesterday, turnout exceeded all reasonable expectations, with over 1000 players sat in chairs by Day 1 ends. 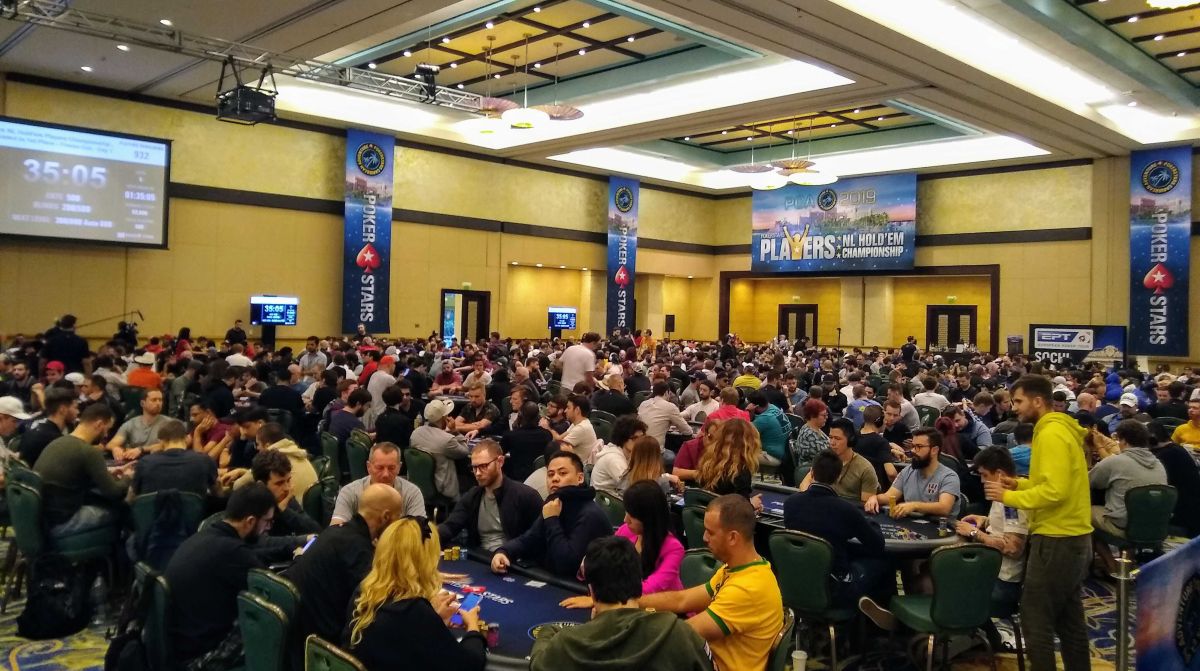 Turns out that if you spend $9 million sending a mix of players to the Bahamas to play in a nosebleed poker tournament, that poker professionals are going to want to play too. PokerStars needed 650 to make this set a record; they expected at least 800; 1000 was probably their dream goal. They waltzed passed that with time to spare.

One of the most telling facts from the event so far: If you discount the 320 Platinum Pass winners, the remaining 694 players alone—those who came here through satellites or via direct buy-in—would still make the biggest $25,000 buy-in tournament in history.

And we still haven’t got in the numbers yet from late registration, so we expect a few more to grab last minute seats. Watch this space.

Tension at the Table

Here’s another great fact: 75% of all Day 1 players made it through to Day 2. What we’re seeing is a lot of very slow, cautious play: Not surprising when there’s $25,000 at risk, with hundreds of players likely in a once-of-a-lifetime situation. There’s going to be a bit of scared money out there.

Indeed, one thing that immediately grabbed us when we went into the room was just how quiet it was. There was an overall vibe of serious, meaningful play. That caught us by surprise, only because we’d read and heard so much of this bringing the WSOP vibe to the tables.

In our minds, that conjured up the idea of a somewhat raucous room—the WSOP is famous for being rammed with Daily Deepstacks players and other side games alongside their marquee tournaments.

Not that the reports of a “WSOP feel” are wrong; from the player’s perspective, that is probably an accurate impression.

But from the outside looking into the conference hall in the Atlantis, it’s all business.

With that said, there were some big bust-outs. In a minor PR blow to PokerStars—though, neatly demonstrating the skill edge in poker—almost all the major celebs at the tables busted out in short fashion.

Celebs that busted out of the #PSPC on Day 1 include @paulpierce34, @tonyhawk and @TheSergioGarcia— Michael Gentile (@SpookyBugs) January 07, 2019

Pro skater Tony Hawk, Comedian Norm MacDonald (who is doing a set at the Atlantis later this week), Former NBA Champion Paul Pierce and golf pro Sergio Garcia all hit the rail on the first day. The lone remaining celeb in the field is Bruce Buffer, who is bringing 70,000 chips back for Day 2.

Obviously giving players a buy-in to a $25,000 tournament, free flights, accomodation, food, a players party, a limo ride from the airport and general Bahamian hospitality is not enough: All Platinum Pass winners (along with anyone who won a satellite or bought in directly to the PSPC) get what has to go down as one of the most desirable bags of branded swag we’ve seen.

Forget a water bottle and a branded USB stick. We’re talking t-shirts, we’re talking custom socks and a hat. There’s other apparel jammed in there. Boom what’s that? Only a PSPC-stamped bluetooth speaker. All fitting in to a unique PSPC-branded bag.

We really should not be enamored by a bunch of branded swag but we are. Unashamedly. We’ll probably write a ten-part feature about every aspect of this bag. Maybe if we do that they give a set to two needy poker journalists.

PokerStars Ontario got off with a bang this week as the operator launched its new client in the jurisdiction. As part…

With the PokerStars Players Championship (PSPC) coming up in January 2023, PokerStars is offering many ways to qualify…

PokerStars Has Given Away Nearly 300 PSPC Platinum Passes

PokerStars has given away close to 300 Platinum Passes to PokerStars Players No-Limit Hold’em Championship (PSPC)...