The popular freezeout tournament now takes place five times per day from Monday to Saturday with a buy-in of $25.

Because of its success, we are monitoring some guarantees and will continue to do so in the coming weeks.GGPoker has once again expanded its weekly tournament schedule, adding in new additions to its ever-growing GGMasters. As of February 1, 2021, the tournament schedule on GGPoker features five daily GGMasters editions each with a price tag of $25.

The signature freezeout tournament has been expanding ever since its inception and now boasts weekly guarantees of at least $2.5 million.

The newest additions to the daily schedule cater to different time zones and offer different tournament structures. All five daily GGMasters tournaments feature the traditional freezeout format and have a guarantee of at least $25,000. The largest promises a prize pool of at least $75,000.

What we’re also seeing is a lot of value for players in these first days. As is often the case when GG adds to its freezeout schedule, tournaments will often overlay for a while before the player pool realizes what’s on offer.

Half of all the new $25 Daily GGMasters tournaments so far have missed their guarantees, according to pokerfuse’s data, which means EV for players playing these spots.

“We have rolled out the new schedule in the last week, and because of its success, we are monitoring some guarantees and will continue to do so in the coming weeks,” A GGPoker spokesperson told pokerfuse.

“To give our players the very best tournament experience possible, the GGPoker schedule is optimized on an ongoing basis. We’ve paid special attention to Saturdays, with a total guarantee of $250K for the GGMasters $25 tournaments running that day.”

This expansion is in step with the continued growth of its other promotions, with an pretty staggering $7.5 million given away during the month of February. Four new daily GGMasters tournaments launched on February 1: GGMasters Asia, Double Stack, Bounty and Fast. They join the Daily GGMasters, which was introduced in September 2020 following its widespread popularity.

The upcoming schedule for the next seven days includes additional boosted editions, two of which include a $60,000 guarantee for the GGMasters Daily.

One of the new additions to the schedule stands out in particular. The GGMasters Bounty $25.20 features the lowest rake percentage in the online poker industry right now. A significantly lower fee of $1.20 is collected as rake in the PKO, $12 each goes towards the cash and bounty pool.

The fee in this event breaks down to 4.8% and is the lowest in terms of percentage alongside the $1,050 GGMasters High Rollers.

All other daily editions of the GGMasters include a rake of $2 and $23 is allocated for the prize pool. This works out to a rake of 8%, which is on par with the original $150 GGMasters.

The first few Daily GGMasters in February turned out to be quite valuable for players, as nine of the first 18 Daily $25 GGMasters came up short of meeting their guarantee. 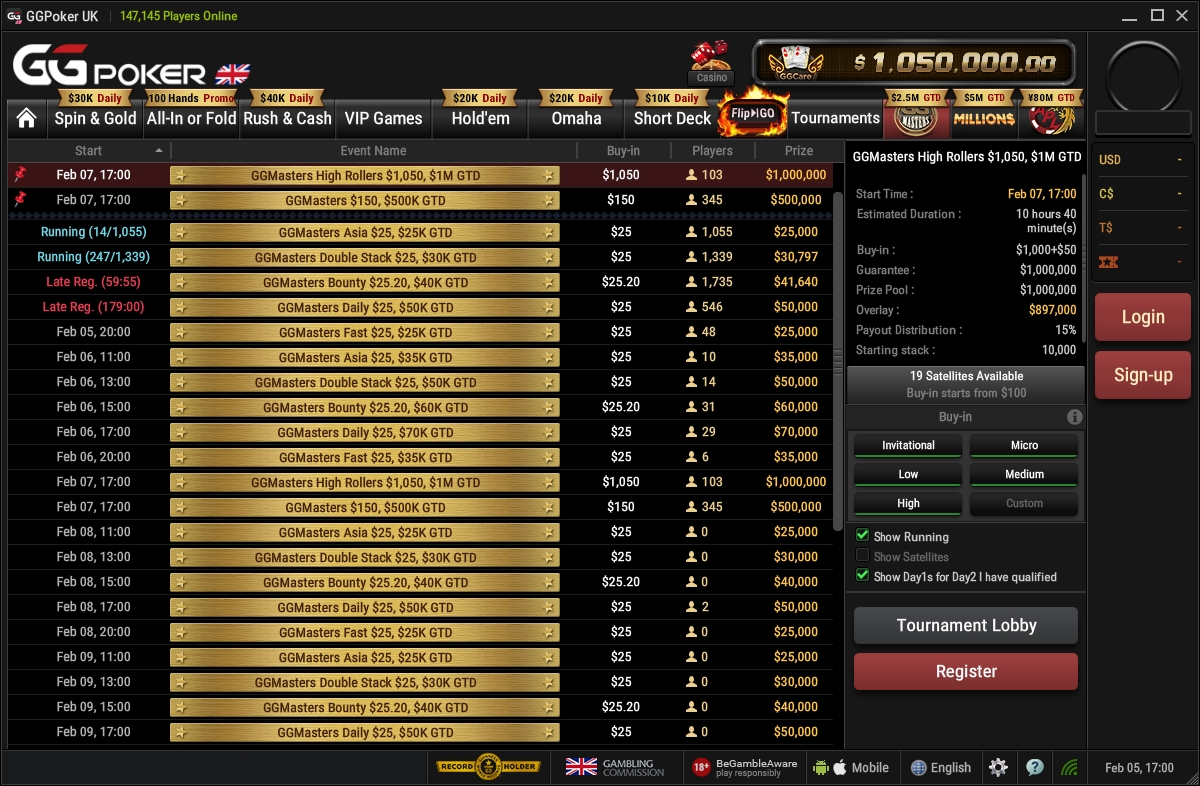 It’s not uncommon for a GGMasters tournament to result in an overlay. The original $150 GGMasters failed to cover the guarantee regularly after it was launched for the first time on January 5, 2020. Regardless of that fact, GGPoker doubled the guarantee from $250,000 to $500,000 within just 12 weeks.

The freezeout format has been widely supported throughout 2020 and the continued popularity has led to another expansion. The new weekly GGMasters line-up now totals 27 tournaments

Each of the GGMasters tournaments continues to represent an ambitious undertaking. With re-entries commonly spread among all online poker operators, freezeouts with larger guarantees remain in the minority. The GGMasters High Rollers with a $1,000 buy-in is the only known event on a regular basis to feature a seven-figure prize pool guarantee on a freezeout tournament.

GGPoker also previously held one-off special editions for the $150 GGMasters. For example, it was featured as a bracelet event during the WSOP Online Bracelet Series. $150 buy-in included a boosted guarantee of $1 million and generated a prize pool in excess of $1.3 million. The $1,500 High Roller edition during the same festival gathered more than $3 million in prize money.

With the expansion of the new daily tournament schedule, GGPoker continues its path to cement their claim as one of the leading online poker operators. The four new daily $25 GGMasters tournaments went live on February 1, 2021.

There will be gold bracelets for Ontario online poker players as well!