The fast-growing GGPoker adds new format of LSNG to schedule with bigger prize pools and more chances to win.

Players on the global GGPoker network now have a new game option to choose from. For the first time, 6-handed versions of the popular lottery sit & go format (LSNG), Spin & Gold, are now running in the GGPoker lobby.

In many ways, the new 6-handed Spin & Gold are just a larger version of the original 3-handed games, but there are a few differences as well. As with the 3-handed games, prizes are based on a random spin, with possible prizes as high as 200,000 times the buy-in. However, one of the key differences is that as the prize multiplier goes up, so does the number of players who get paid.

The 3-handed games are a winner-take-all situation, where all the money goes to the top player. The new 6-handed games pay out at least two players, but as the prize multiplier increases, more players share in the prizes.

It is worth noting that, at the $100 level, prizes are flattened out again. While the highest multiplier for smaller buy-ins is 200,000x, $100 games are capped at 40,000x for a maximum prize pool of $4 million, and all six players in the game will get a piece of the $4 million.

Until the introduction of the 6-max Spin & Gold, GGPoker had a bit of a hole in their schedule, with no single-table sit and go format larger than 3-handed.

Most operators in the online poker space offer single-table formats with at least 6 players, and many offer 9-handed versions as well. Unibet is one global operator that doesn’t quite hit the 6-handed mark, but they offer a 5-handed sit and go format on the regular schedule.

GGPoker was the odd one out, with only the 3-handed Spin & Gold passing for a single-table sit and go. The addition of the new 6-handed version of the game adds that larger table format to their schedule, but it also shows the operator’s love of the LSNG format.

There have been other LSNG formats with bigger fields. In 2017, PokerStars introduced a variable-sized LSNG format, called Spin & Go Max. The Spin & Go Max format sets the field at three to eight players randomly before start.

The format continues to run across PokerStars' global and European rooms. New online poker operator Run It Once is also rumored to be planning the introduction of 6-handed LSNG games in the in the near future, whenever “liquidity allows”. Run It Once also says they plan to offer a slower structure in the LSNG format than is standard in the industry, but what their product will ultimately look like remains to be seen. 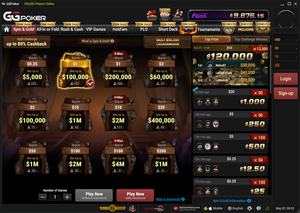 The new 6-handed games are being spread through the same Spin & Gold lobby as the original 3-handed games are. There are currently three different buy-in levels, starting at $1, with $10 and $100 options for bigger bankrolls.

Other than the bigger field and modified multiplier structure, the new 6-handed games play pretty much the same as the traditional 3-handed ones. They are a hyper-turbo format, but the speed slows a bit as multipliers go up. The Insurance feature is also available on the 6-max format, and rake for these games matches the 7% for the 3-handed games.

The new 6-Max Sit & Gold games are a significant new addition to the GGPoker schedule. While not unique in the industry, they represent an innovation in the LSNG format, one that slots nicely into the existing GGPoker landscape.

The new format fills a gap in the schedule for 6-handed sit & go games, but with no traditional sit & go games in their lobby, the latest structure seems to signal a clear preference by the operator for the LSNG format. Time will tell whether players flock to the new games, but GGPoker is clearly putting their money on yes.

GGPoker has deployed Ask Fedor, a new coaching tool built into the online poker client that uses deep learning to…

GGPoker, the new king of the online poker industry, has announced the return of the WSOP Online Circuit Series offering…

Dan Bilzerian, the controversial playboy and poker enthusiast, is no longer representing GGPoker as a brand ambassador….

NSUS Limited, the parent company of GGPoker, has received an online gaming license in Ontario — and the domain it…