The popular LSNG game gets a soccer rebrand timed with the upcoming Euro 2020 and a chance at $1 million for just $5.

PokerStars has put their new cultural ambassador Neymar Jr front and center in their latest soccer-themed game, a rebrand on its popular lottery sit and go (LSNG) format Spin and Go.

As PRO predicted more than a week ago, the new Spin and Goal game is a mostly cosmetic change to their existing LSNG, updating the lobby and tables to fit the football theme.

However, there are a couple of tweaks to the standard formula. The $5 game now has a special top prize pool of $1.2 million, and players can also now compete for $5 tickets in weekly freerolls, open to all.

While Neymar Jr was recently brought back into the fold at PokerStars as a cultural ambassador, his connection to the beautiful game is obvious. And with last year’s UEFA Euro 2020 tournament postponed until this month, the timing is perfect to coincide with the huge football festival.

The Beautiful Spin and Goal Game 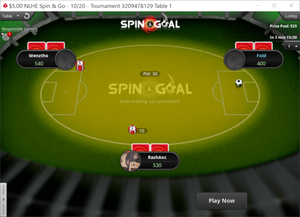 This is not the first time PokerStars has rebranded its popular LSNG format.

Back in 2018, it ran a similar Spin and Goal promotion in conjunction with the FIFA World Cup. For a while, it teamed with the UFC with and rebranded them UFC Spin and Go.

Now, with the UEFA Euro 2020 tournament upcoming, the timing is perfect to roll the soccer pitch back out over the Spin and Go games. The new theme is spread across the buy-in range in the Spin and Go lobby, from $1 up to $250.

Players can buy in to the games directly with $5 cash, or compete in special weekly freerolls to win tickets. The Neymar Jr Spin & Goal Freerolls run every Sunday at 2 p.m. eastern.

Beyond the bumped-up prize pool in the $5 games, the difference is cosmetic. The games play the same as a three-handed hyper-turbo LSNG game with prize pool set in advance on a random spin.

PokerStars is certainly not the only operator to run promotions tied in with the UEFA Euro 2020. Unibet is giving away flip tickets on its global client that let players predict which team will win. Players use the ticket to register in a flip tournament named after the team they think will win.

Partypoker and iPoker skins are also gearing up for their own football tie-ins and, given the global popularity of the game, it seems likely other operators will launch their own in the near future as well. 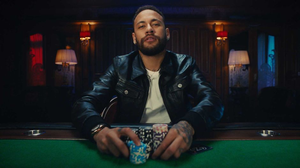 The recent addition of Neymar Jr to the PokerStars ambassador team gives the operator the perfect tie into the football themed game. The Brazilian mega-star is considered one of the best to ever play the game, making his face the perfect theme for the promotion.

His love of poker and association with the number one global poker operator go back a long way. He first signed with the PokerStars team back in 2015 as a brand ambassador, and member of the now-defunct Team SportStars along with fellow footballers Ronaldo Nazário and Cristiano Ronaldo, as well as field hockey star Fatima Moreira de Melo.

Neymar Jr left the team around the time Team SportStars was shuttered, but he was back in late 2020. It took some time to formalize his new role as Cultural Ambassador where he planned to focus on “the world of culture … from art and design to music and more.”

While his new role does not directly reference his sporting prowess in the job description, his history in the game makes him an obvious choice to front the new promotion, which is currently underway on the global client.

Players have a chance at the $1 million prize for $5 through August 1, 2021. Freerolls run every Sunday. The delayed UEFA Euro 2020 games get underway on June 11 and run through July 11.