Running alongside the WSOP Bracelet festival, the Summer Online Championships in NJ and NV offer small-stakes value while freerolls offer a chance at a bracelet.

It is going to be a huge July at WSOP.com with the newly announced Summer Online Championships running beside the WSOP 2021 Online bracelet festival.

There is more than $2 million guaranteed across the three-week series that looks very attractive to new and casual players.

If 33 bracelets on offer through the month of July isn’t enough tournament poker, WSOP NJ and WSOP Nevada has stepped up with a companion series running for three weeks this month. With smaller buy-ins on average, the Summer Online Championships appears aimed at a different crowd than the bracelet events.

There are 93 events running from July 7 through July 27, with multiple events running each day. Unlike the Bracelet series, which relies on the prestige of gold bracelets to attract players, every event in the Online Championships has a guarantee.

In addition to the Online Championships, WSOP.com is also putting on some freerolls that mean some lucky player may win a WSOP Gold Bracelet for nothing. The freerolls will award at least one $500 ticket for a bracelet event, but special games on June 30 and July 1 will have 15 tickets guaranteed between them.

Finally, every Sunday throughout July, WSOP NV and WSOP NJ is offering the chance to get a seat in the live Main Event in November at a bargain price. For $215, players will get a chance to play their way into the Big Show for a fraction of the $10,000 retail buy-in.

The Summer Online Championships seems specifically crafted to cater to the smaller bankrolls. While there are a few $1,000 buy-ins across the three-weeks, those are the biggest games on offer.

The small buy-in games generally have huge value as well. The $5 buy-in games typically guarantee at least $5,000 in prizes. That means with rake included, there is $1,000 guaranteed per dollar of buy-in (gty/buy-in), and when rake is removed, that value jumps to almost $1,100 gty/buy-in.

$10 games also have $10,000 guaranteed in many cases, with games as high as $30 coming in at $1,000 gty/buy-in or better. That means the low-priced games are some of the best value of the series, giving the smaller bankrolls a chance at massive return on investment. 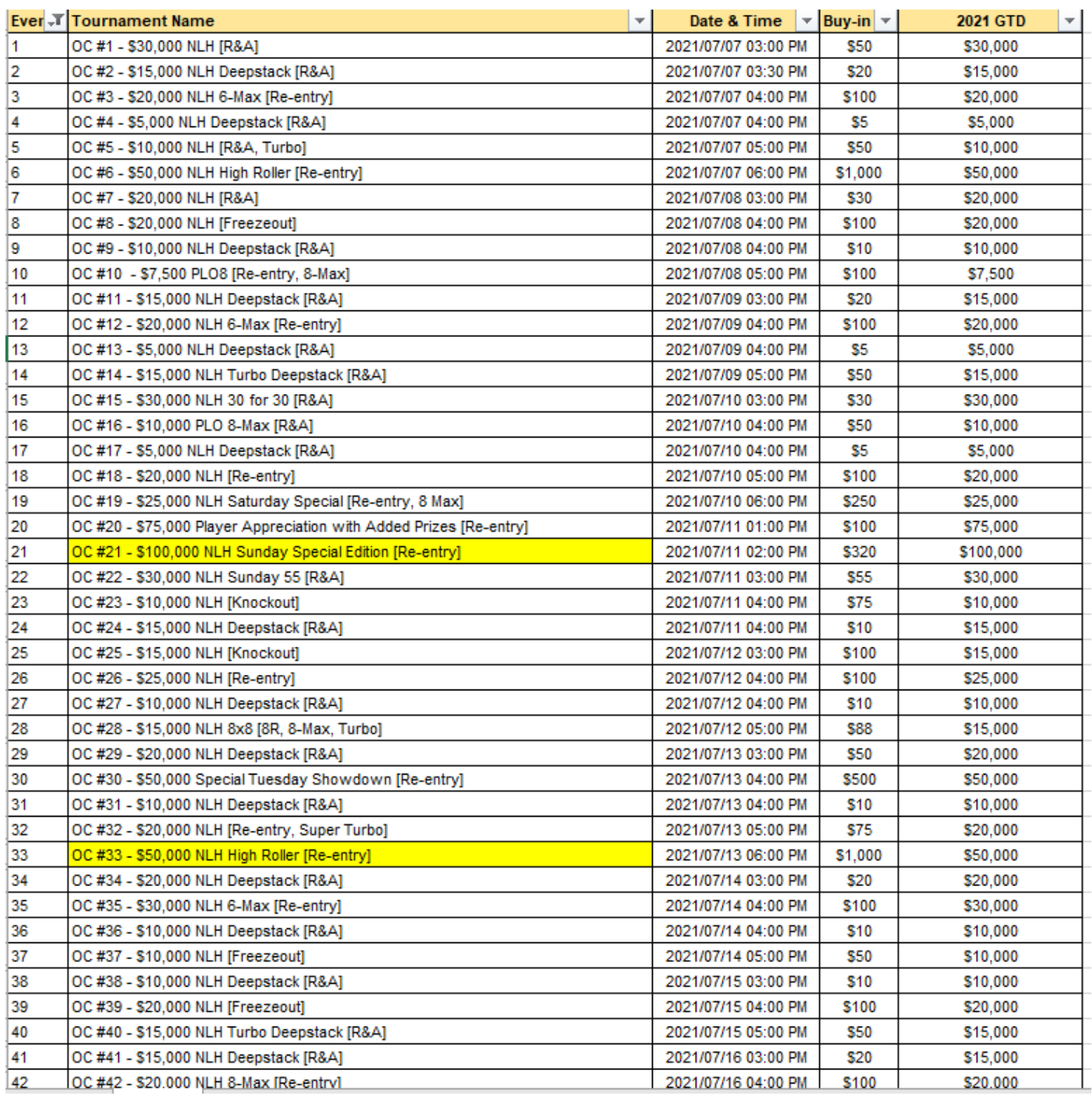 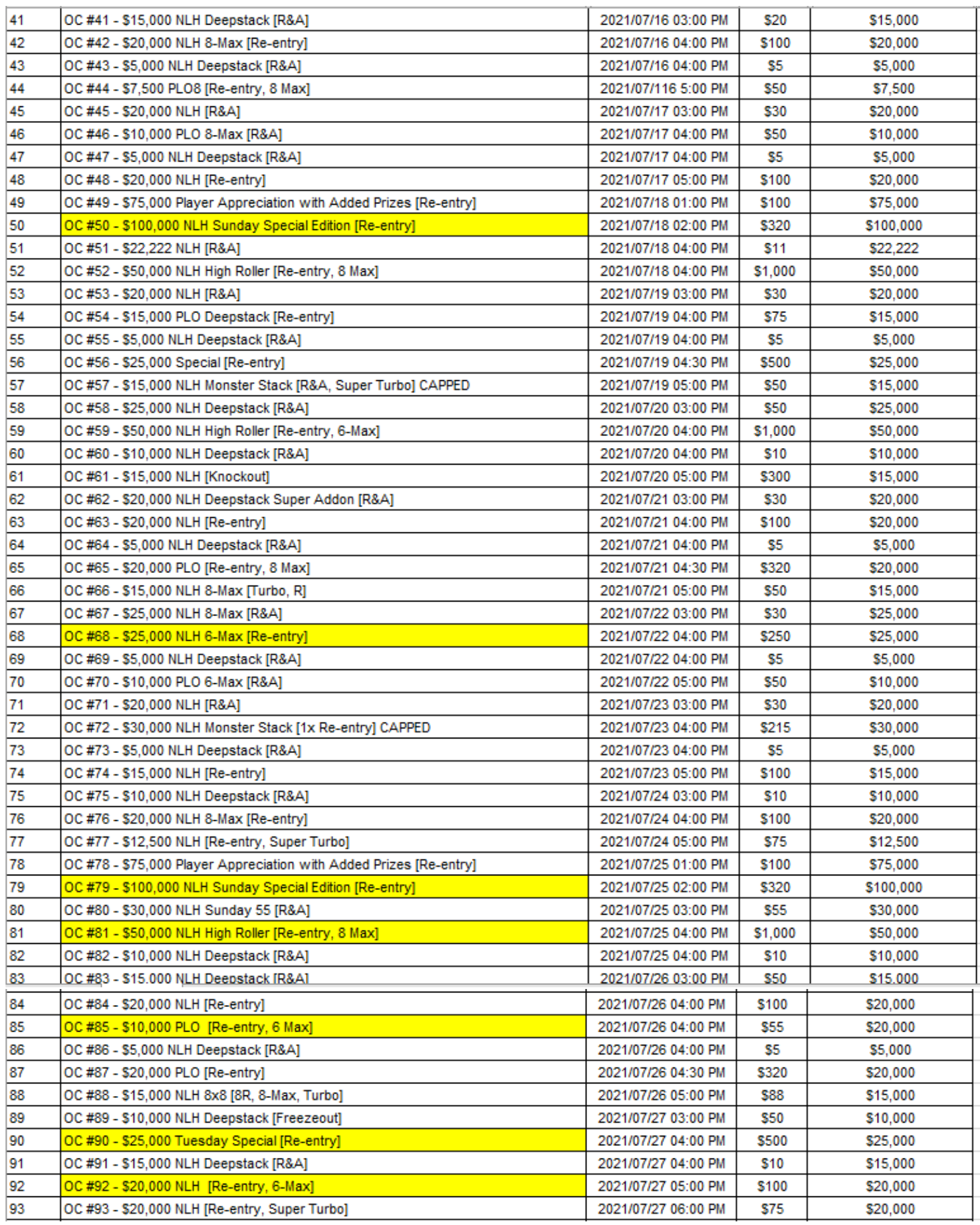 Before the Summer Online Championships get underway on July 7, WSOP.com is looking to give a few players a free shot at an online bracelet. There are daily freerolls running with a single $500 ticket up for grabs, but the operator is also adding a few super satellites.

Cut-Price Tickets to the Main Event

The highlight of any WSOP is the live Main Event in Las Vegas. While this year’s event will play out later than usual, it may be the most anticipated Main Event in recent history after a very unusual 2020 for the venerable live series.

Through the month of July, WSOP.com will be offering American players the chance to get into the Main Event for just $215. Every Sunday in July at 18:30, there will be at least one $10,000 prize on offer, paid out in chips for use as a buy-in to the Main Event.

$200 of the buy-in goes to the prize pool, so there will be one ticket on offer for every 50 entries in these games. Players can win more than once through the month, and players who win a second $10,000 prize will be able to use the additional chips for any WSOP buy-in of $500 or higher.

There are multiple ways for players in New Jersey and Nevada to win big in July. The Summer Online Championships is looking to pad the bankrolls of some smaller-stakes players, and freerolls are also giving away chances to win a bracelet for free. Add all that to the bargain-priced Main Event satellites, and it is clear that WSOP.com is the place to be in July for poker fans in NJ and NV.