Live Poker Returns with a Bang in Southern Alberta

With pandemic restrictions lifting in Alberta, live poker is back in a big way with the first tournament series since November 2020.

The pandemic lockdowns of 2020 put the brakes on live poker around the world, and the thriving poker community of southern Alberta was no exception. When lockdowns kicked into high gear in March of 2020, live poker rooms in Alberta shut down like the rest of the world.

Now, live poker is back as the Summer Super Stack is in full swing with huge turnouts for the early events.

The Super Stack series has been running at Deerfoot Inn & Casino in Calgary for several years, with four series a year tying into the seasons. The last full running of a Super Stack was in February of 2020, just before the main lockdowns. The event saw the final tournament, the $1,500 Main Event build a prize pool of more than $180,000 with more than 100 runners.

During a brief reopening in the province in November, Deerfoot quickly put together another Super Stack event, and it showed the the western Canadian poker scene was itching to get back to the felt.

With more advance warning of this current Summer Super Stack, the buzz around the reopening showed a lot of interest on social media, but it remained to be seen just how committed Alberta poker players were to getting back to the felt. The early turnout so far put to rest any doubts about the appetite for poker in the Wildrose province.

Super Turnout for the Super Stack 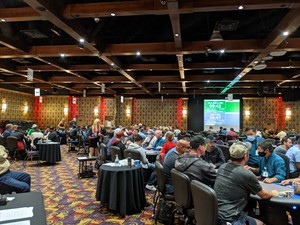 With mid-week numbers this high, it bodes well for the turnout of the weekend’s Main Event. The $1,100 closing event has two Day 1s on August 13 and 14, with the final day playing out on Sunday, August 15.

Given the huge turnout for the quickly organized $1,100 in November, and the packed rooms so far this week, it doesn’t seem out of line to wonder if the Main Event prize pool could cap $300,000. Add in the money already collected, plus more than $100,000 for Event 6, and the total prizes for the festival could top $800,000. 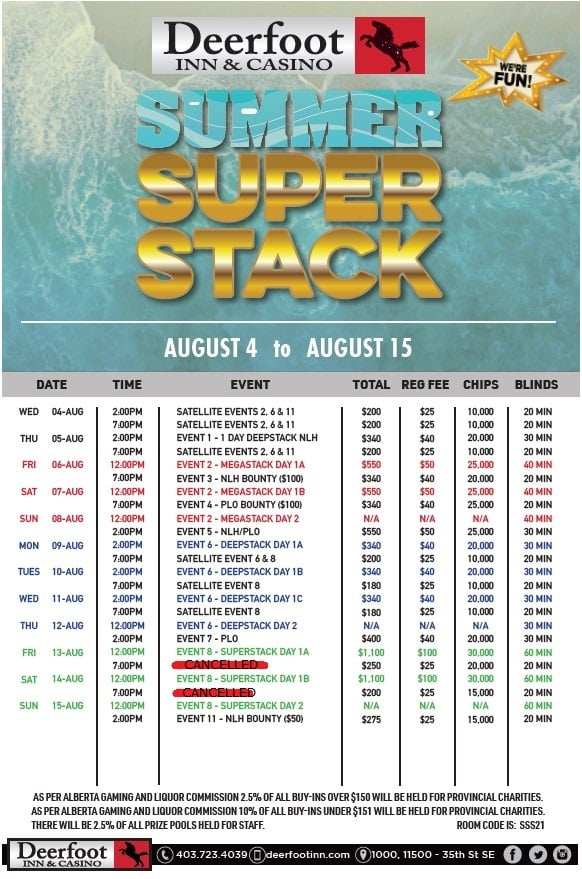 Another Shot at the Circuit

The pandemic was a blow for the poker room at Deerfoot Inn & Casino for more than one reason. Like everyone else, it was forced to shut down live events on a moment’s notice, but there was more at stake than just the usual games.

Mere weeks before the shutdown, the poker manager at Deerfoot, Don Tinordi, secured a World Series of Poker Circuit (WSOPC) event for Calgary in May of 2020. It was set to be one of the biggest poker events in recent history in the province, and marked the first time a Circuit event had been slated for western Canada.

Then the lockdowns hit and the plans crumbled, but now that live poker is reopening, Deerfoot is getting another kick at the WSOPC can. In the run-up to the Summer Super Stack, Tinordi announced the re-booking of the event for January of 2022. With 13 events across 12 days, the first WSOPC in the city is sure to warm up poker players even in the cold of January in Calgary. 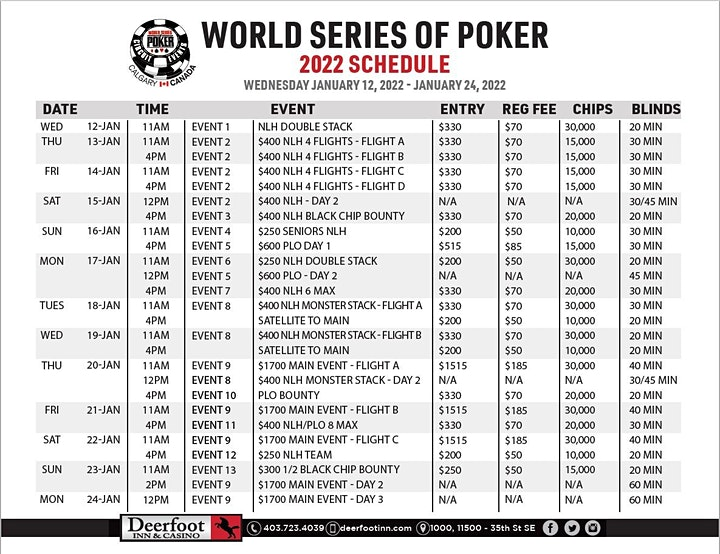 If there was any doubt the last 18 months of lockdown left poker players itching to get back to the live felt, packed rooms for a mid-week $340 put them to rest. The Summer Super Stack runs through August 15 at Deerfoot Inn & Casino in Calgary, Canada, and it is showing that live poker is back in the land of the maple leaf.