888poker’s The Festival Online Is Well Ahead of Guarantees

With 13 events in the books, The Festival Online from 888poker is having a strong showing thus far, coming out ahead of its guarantees.

With more than $750,000 in guarantees for The Festival Online, and the series more than halfway finished, 888poker will be smiling behind the scenes as the games play out. There have been 13 events in the series, and not a single game has overlaid yet.

The series has run 13 of its 21 planned events, and even the $100k Guaranteed Open Event managed to meet its colossal guarantee. With precisely 1,000 total entries for the $109 game, it came in with exactly $100,000 in the prize pool. That field size also put the opening event as the second-best attended game of the series.

888poker’s The Festival Online at a Glance

The Festival Online Meets All Guarantees 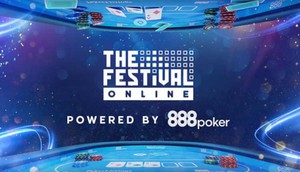 With a little over half the series now in the books, all 13 games so far have equaled or exceeded the promised prize pool. With just over $350,000 in total guarantees to date in the series, the games have collected more than $50k in extra prizes over and above the guarantees, for an increase of nearly 15%.

While the biggest prize pool of the series has come from The Festival Online – Texas Progressive KO with $100k Guaranteed and a final prize pool of more than $107k, the best performing game in the series came from one of the smaller events.

The Festival Online – PLO Deepstack only saw 84 entries for the $55 buy-in event, but that was enough to put $4,200 into the prize pool. With a guarantee of $2,000, that meant the total prizes were 110% above the guarantee, the only game that more than doubled its promised prize pool.

There have been a few other great performers as well. The most recent game, The Festival Online – Super KO, cost $109 to enter and guaranteed at least $12k in prizes. A total of 230 entries for the game brought the prize pool to $23k, for an increase of more than 90%.

There are still eight games left to play in The Festival Online, with three more games scheduled on July 24, two each on July 26 and July 31, and the final Afterparty game running on Aug 1. There are still more than $300,000 in guarantees to hand out before the Festival comes to a close, and if the opening weeks are any indication, there will ultimately be quite a bit more than that to play for.