There has been a lot of interest in bringing more women into the game of poker, and one way operators like PokerStars are looking to do that is through women-only events. While, in theory, poker is a mind-sport with no inherent gender differences, the environment of play in male-dominated fields in the real world can be very daunting to new female players, and women-only fields can be a way to create a more welcoming environment.

With the World Championship of Online Poker (WCOOP), PokerStars gave the ladies an exclusive chance at WCOOP glory. With a two-day event that began on September 18 with entries restricted to women only, the $530 Women’s World Championship saw 78 entries, falling short of its $65,000 guarantee. The first WCOOP Women’s Championship winner, playing under the alias 'Sjlot’ (Charlotte Van Brabander), banked just shy of $16,000 for her efforts.

The big Championship was not the only chance for women to get into exclusive events in this WCOOP. Later in the series on Sep 25, WCOOP 93 is exclusive to women as well, with three buy-in levels starting at $5.50, putting a Women’s WCOOP title within the grasp of all bankroll sizes.

Last verified: Feb 2023
Special Signup Offer
Not regulated or for use in Ontario
100% deposit bonus up to $600!
Claim Signup Offeror read our full review »

PokerStars is giving women multiple shots at their own exclusive COOP title during this year’s WCOOP. The $65k guaranteed Women’s World Championship completed registration with 78 entries for a prize pool that did not break the guarantee.

That will not be the only chance for women to play in an exclusive field in this series, however, with WCOOP 93 open only to women playing out on Sep 25.

As with all of the standard WCOOP events, there are three buy-in levels for WCOOP 93 running from $5.50 up to $109. The games will play as progressive knockout (PKO) events, so there will be two ways for ladies to win cash, either through prize pool money and/or by catching bounties along the way. 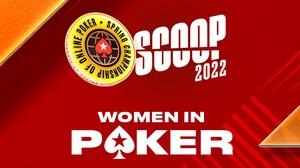 SCOOP 96 was a PKO game with three buy-in levels from $5.50 to $109. There was $38,000 in total, guaranteed between the three games, and all three hit their guarantees with the low event going almost 50% higher than its original promise.

There is an entire slate of games on the regular PokerStars schedule only for women, headlined by the $2k guaranteed Women’s Sunday. The $22 buy-in is the biggest game on the regular schedule for women every week, but there is plenty of exclusive action for ladies throughout the week, starting at just 11 cents.

There are three big games through the regular weekly schedule, with Women’s Tuesday ($11 rebuy/add-on with $500 guaranteed) and Women’s Saturday, a $7.50 PKO game with $200 guaranteed added to the marquee Women’s Sunday. There are daily Women’s Special games priced at $4.40 or $8.80 with as much as $250 guaranteed.

Representing more than half the population, women remain an untapped player pool for poker operators, but with exclusive championship events, and a regular schedule aimed squarely at women, PokerStars is looking to help change that.

To help new players get their feet wet, the operator is offering a generous PokerStars Deposit Bonus to help boost funds at a great value.