Perry Shiao made his dream come true and Caio Toledo won a wife at the final table of the Monster Stack. 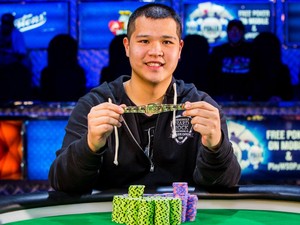 The biggest payout seen so far in this year’s WSOP has gone to amateur player and professional poker dealer Perry Shiao, who goes home tomorrow with $1,286,942 and a gold bracelet on his wrist.

Shiao deals at the Seminole Hard Rock Casino, in Hollywood, Florida, and celebrated his 26th birthday on the first day of the Monster Stack.

He won $7,500 in a Florida tournament a month ago, and decided to pursue the dream—go to Vegas, play a couple of events and hope to get lucky.

“I came out here to chase the dream,” Shiao said winning. “I dreamed I might win, but I didn’t realize the dream would be like this.”

Shiao wasn’t necessarily the happiest man to leave the final table. When Caio Toledo bust out in 8th place, he walked straight to the rail, took a diamond ring from his pocket and proposed marriage to his girlfriend. To the crowd’s delight she accepted, making Toledo’s exit the happiest ever early departure from a WSOP final table.

The two former bracelet winners who made the final table Hoyt Corkins and Asi Moshe finished 9th and 3rd respectively. The runner up was amateur Eric Place, who saw his dominance of the final table last until play got to heads up, when Shiao took the lead.

The Monster Stack’s field of 7,192 makes it the seventh largest live tournament ever held. 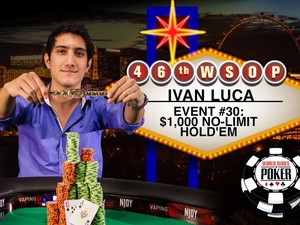 Franco Ivan Luca has become the first player from Argentina to win a WSOP bracelet. He defeated Artur Rudziankov after the two were the only players left in the tournament which ran into an unscheduled extra day.

During the final two hours of the event, Rudziankov managed to gain the chip lead more than once, and had high hopes of besting Luca. His hopes ended after he ran A-3 into Luca’s A-10, all-in pre-flop.

PokerStars Team Pro Jason Mercier is celebrating his third WSOP bracelet, and his first in a No Limit Hold’em event. It was also his first cash in this year’s WSOP events.

“It feels great. I was really down on myself. I was getting beat up in cash, busting every tournament. This is the first tournament I made Day 2 of. It feels really good just to go deep, make the final table, and to win is just the cherry on top,” said Mercier.

He took the chip lead at a talent packed final table by eliminating James Obst, Igor Dubinsky, and Dario Sammartino within the space of just eleven hands. That left just three players, and after Mike Gorodinsky exited in third place, only Simon Deadman was left between Mercier and the bracelet.

The end came with a classic flip, Mercier’s pair of sixes against Deadman’s two overcards. Deadman failed to hit the cards he needed, but his second place finish is the best he has ever had at the WSOP. Mercier’s 6-6 was worth first place prize money of $633,357.

Mike Gorodinsky’s third place adds to a 2nd and a 9th place finish which he has already racked up this year, getting very close indeed to securing another bracelet. Gorodinsky won his first bracelet in in 2013 in an Omaha/Seven Card Stud 8 or Better event. 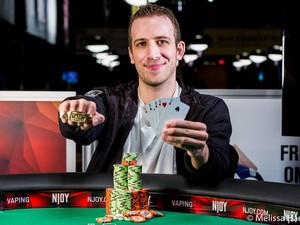 Britain got its second bracelet of the series with a victory for Benny Glaser in only his second year playing at the WSOP.

“This is one of my very best games. I play it all the time, mostly online,” Glaser said after his victory. “So, I wasn’t surprised to win the bracelet in this event. In fact, I thought this one gave me the best chance.”

Glaser began the heads up contest at a 4-1 chip disadvantage. Overcoming the chip deficit was made even more improbable as his opponent was three-time WSOP bracelet winner Brock Parker.

“I ran really good at the end,” Glaser said. “I got a lot of cards and it seemed [Brock Parker] missed his draws. I ran good at just the right time.”

Day 1 of the Split Format Hold’em event ended with 32 players still in the race. A disappointing field of 873 players—40% less than last year—built a relatively small prize pool of $436,050.

Jonas Christensen will begin the second day as chip leader with a stack of 481,000 chips. The field is notable by the absence of most of the celebrity players who have opted for bigger buy-in events—they may have missed an opportunity here.

The final 32 players will play in sixteen heads up matches until eight players return to a single final table to play for the bracelet tomorrow.

The money bubble burst two hours short of the end of play, leaving 29 players in profit and ready to start Day 3.

The event drew a small field of 376 players, with Joshua Turner currently at the top of the leaderboard. Turner won a WSOP Circuit event in February for $136,945, so he’s no stranger to the pressure of being at the head of the pack with big money at stake.

The pressure comes from players such as Randy Ohel, Taylor Paur, Allen Kessler, John Racener and David Benyamine, who all have top ten stacks.

Further back, former WSOP Main Event champion Joe Hachem is in 19th place, and the tournament short stack is Ted Forrest, who has six bracelets, his last won in the 2014 WSOP $1,500 Seven Card Razz event.

140 of them still have chips after Day 1 with the leaderboard topped by Greg Genge who took 43rd place in the same event last year.

Gabriel Andrade leads the pack heading into day to of the $10,000 No-Limit Hold’em 6-Handed Championship event. Second in chips is Max Silver from the UK, and fellow countrymen Jake Cody is in fourth place.

Allen Kessler Antonio Esfandiari Argentina Bertrand Grospellier Brandon Cantu Brock Parker Christian Harder Czech Republic Dario Sammartino David Benyamine Doug Polk Greg Merson Jake Cody Jason Mercier Joe Cada Joe Hachem Jon Turner Kevin Saul Max Silver Nevada Phil Hellmuth PokerStars Sam Simon Taylor Paur Ted Forrest Thomas Gabriel UK Online Poker WSOP
Jocelyn Wood, Editor Joss is a graduate in English from the University of Birmingham and has a Master’s Degree in Organisational Development from the University of Manchester. His career path has taken him from the British Army, through business & finance to seven years as a successful professional poker player. His experience of the European Union, law, accounting, finance, regulation and online poker provide the basis for his insights in the PRO specialist categories of Industry and Law & Regulation. As CEO he steered his own company through full Financial Services Authority regulation, and was asked by Morgan Stanley to take their UK mortgage business through the same process. Although British, he lives in Arequipa, Peru, set high in the mountains and surrounded by volcanoes. He is married to a Peruvian and has three children.
Article published on June 18, 2015.
/pokerfu.se/nklx