Phil Hellmuth makes a brave attempt but finishes in sixth as the ONE DROP Foundation benefits to the tune of over $3 million. 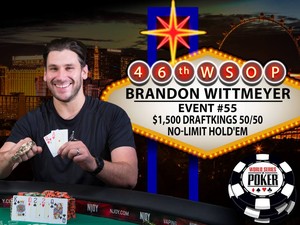 The first World Series of Poker event to be sponsored, and the first in which half the players will make the money gained an impressive 1,123 entries.

Appropriately for a fantasy sports sponsored event, professional sports bettor Brandon Wittmeyer ended up winning the gold bracelet, and first prize money of $200,618. This was his fourth cash of the series, and his second score of over $200,000. Wittmeyer won $215,964 for a third place finish in the $2,500 No-Limit Hold’em event just a few days ago.

“I really felt comfortable playing at the final table,” Wittmeyer said. “For me, finishing 3rd before was something I learned from. There was a huge hand when I didn’t trust my read and that might have cost me the tournament because I made a key mistake. This time, I decided to go with my reads and trust my instincts. I really think that helped me this time around.”

Matt Affleck came in sixth place, and the runner-up was Derek Gomez, who recorded his third cash of the series, all in $1,500 buy-in events.

The final $1,000 buy-in event of this year’s WSOP produced a field of 2,412 which has now been reduced to a more manageable 26 after the first two days of play.

Stephen Graner has the chip lead going into Day 3. His bankroll was given a major cash injection when he came 6th in last year’s Millionaire Maker event for $273,854. Briton Paul Vas Nunes lies in second place, but with less than half of Graner’s chip stack. Nunes’ biggest WSOP score came in 2012 when he final tabled a $3,000 NLHE event and finished in third to win $290,407.

The biggest poker names are playing elsewhere, leaving the field open to the tournament grinders. Players such as Jonas Lauck who has a WSOP 2nd place finish on his resume, and is currently sixth in chips, are looking for bracelet glory as well as the first prize of $399,039.

Duhamel beat retired business man Bill Klein to take the title. Klein is donating his entire second place money of $2,465,522 to the ONE DROP Foundation. Klein doesn’t play the game for money—not only does he donate all his winnings to charity, but every time he loses, he also donates an equal amount to charity.

“Don’t let me break even,” he says. “Either beat me really badly, or let me win really big.”

Last year’s Big One for ONE DROP winner Daniel Colman came in third this year. The buy-in for this event alternates between $1 million and $111,111, but each year’s winner at whichever buy-in is considered to be the defending champion.

The event nearly produced a huge story, but it didn’t quite get there. Phil Hellmuth turned in a remarkable performance, and though he was the chip leader at one point with six players remaining, the poker gods deserted him and his quest for bracelet number 15 as he exited the tournament without getting any closer to the first prize.

At one point during three-handed play, the game was halted to allow medical treatment for a spectator who suffered a heart attack.

“That moment really gave this all a sense of perspective,” Duhamel said about the incident. “Obviously, we are all hoping he will make it and be okay. It was so unfortunate.”

$5,555 of each entry fee is donated to the ONE DROP Foundation which means the charity will receive $749,925 plus of course the huge donation from Bill Klein. The charitable element proves attractive to wealthy players—typically a $100,000 buy-in tournament attracts a much smaller field. The World Poker Tour Alpha 8 event held in Las Vegas at the end of last year attracted a strong field of 55 players, less than half the size of this year’s WSOP event.

On a side note, Phil Ivey turned up in Vegas to play this event. It was the first he entered in this year’s WSOP. It did not go well, and he was one of the first players to be sent to the rail.

The chip leader at the end of the day was Kevin Killeen followed by Luke Marsh and Bradley Goulding.

Another big turnout was seen at the $25,000 High Roller Pot-Limit Omaha event where 166 players put up the substantial entry fee to take a crack at the bracelet.

This was another new event for the WSOP, and registration will be kept open until the start of day 2, so that number could increase.

70 players are left with chips in front of them, James Park sits on top of the leaderboard, closely followed by Scott Clements and Joseph Sanders.

Daniel Negreanu is running out of time to add another bracelet to his cabinet, but he still has chips in this event; so too do Brian Hastings, Phil Galfond and Christian Harder—all from the online generation.

The prize pool is just shy of $4 million at $3,942,500, and first prize will be a substantial piece of that. Payouts will not be confirmed until Day 2 starts and the total number of entries has been determined.

Daniel Colman Daniel Negreanu Jeff Madsen Jonas Lauck Jonathan Duhamel One Drop Phil Galfond Phil Hellmuth Phil Ivey Scott Clements WSOP
Jocelyn Wood, Editor Joss is a graduate in English from the University of Birmingham and has a Master’s Degree in Organisational Development from the University of Manchester. His career path has taken him from the British Army, through business & finance to seven years as a successful professional poker player. His experience of the European Union, law, accounting, finance, regulation and online poker provide the basis for his insights in the PRO specialist categories of Industry and Law & Regulation. As CEO he steered his own company through full Financial Services Authority regulation, and was asked by Morgan Stanley to take their UK mortgage business through the same process. Although British, he lives in Arequipa, Peru, set high in the mountains and surrounded by volcanoes. He is married to a Peruvian and has three children.
Article published on June 30, 2015.
/pokerfu.se/9799

Christmas may be over, but the festive mood remains on WSOP’s real money online poker platform. After offering…