Several factors may have contributed to the popular tournament declining 27% from last year and more than 41% from its record-breaking debut in 2015.

For three years running, the World Series of Poker’s mega bracelet event, Colossus, has been the largest tournament of the summer. In its first year, the Colossus shattered the record for the largest live tournament ever held. Over the course of its four-year run, the multi-flight event has been a staple WSOP affair for poker grinders as well as recreational shot-takers. It is the tournament that promises multi-million dollar prize pools and a possible million dollar payout, all for $565.

In 2018, it is no different. Colossus has drawn thousands to the Rio to post their buy-in, in many cases multiple times, in an effort to turn a little cash into a life changing score.

However, it seems as if Colossus has lost more than a little of its luster here in 2018. The tournament, which just last year saw over 18,000 entries saw a drop off of over 27% in terms of registrations. And despite a final day surge in participants, the tournament that three years ago boasted 22,374 runners closed registration with 13,071 entries—almost 5,000 fewer than in 2017 and more than 41% less than the record-breaking number set in 2015. 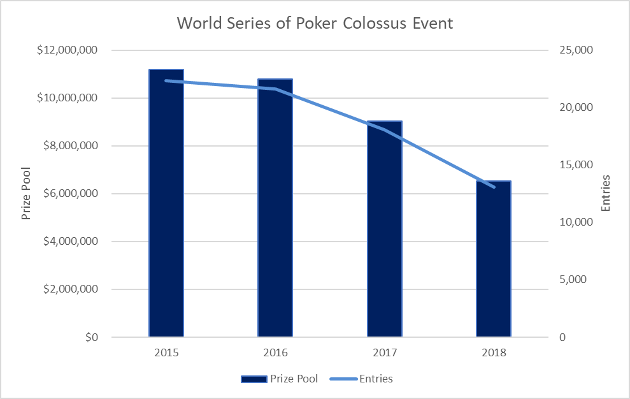 The difference from last year equates to just under $2.5 million less in the 2018 prize pool, and in terms of revenue for the WSOP (both fees and staff), a reduction of roughly $325,000. In contrast, the global online spend on gambling advertising and promoting betting offers online and on TV has grown over the last year.

The gambling industry is growing, so while it is still a tournament worth firing in, we are taking a look at why the Colossus may have lost some of its power.

Every year the competiton for poker tournament dollars in Las Vegas, especially those of the recreational player, becomes more and more intense. For years now, the World Series of Poker has not been the only game in town. While the pursuit of a gold bracelet still wields a hefty amount of prestige, it can be argued that the best value tournaments are spread throughout multiple properties. The Venetian, Aria, Wynn, Planet Hollywood, Golden Nugget and even Binion’s have continued to curate their own summer poker series, zeroing in on recreational dollars by providing deeper structures over a wide variety of games.

Plainly put: while there is no tournament as big as the Colossus, there are plenty of options out there in the $500 range for players to choose from.

Perhaps though, this year, the biggest competition to the Colossus has come from the WSOP itself. On the Friday night before the start of the Colossus, the WSOP launched the first flight of the multi-day $365 GIANT. On Sunday, at the same time as the Colossus was playing, the $365 PLO Giant took place. Also firing on Sunday, the record breaking $365 Online Bracelet event took place in the middle of the day. All of these tournaments are catering to a similar demographic.

Perhaps, the WSOP ended up cannibalizing its own player base over the weekend. This combined with offers from other properties may have put a strain on the time, attention and bankrolls of those who journeyed in for the weekend.

If it is not a matter of having too many options, perhaps it was the new scheduling of the Colossus that played a part. In all three years prior, the Colossus had taken place on the first weekend of the WSOP, starting on the first Thursday or Friday. This year, organizers opted to have the Colossus start on the first Saturday allowing the final two flights to take place on a Monday.

The small change may have put the question of whether it is easier for those that hold down a steady job to take a Friday or a Monday off when taking off for a three-day poker weekend. Some companies have been implementing the “Summer Friday” policy which allows employees to take off or leave early on the final day of the work week as opposed to getting a slow start to the week by missing a Monday. The difference in the combined total of runners from 2017 to 2018 in the final two flights was 1,832 fewer entries in 2018.

Another scheduling misfire, and potentially more damaging, was the notion that the $365 GIANT should begin on the Friday before the Colossus, as opposed to the Friday after the Colossus. In its first year (2017), the GIANT began a full week later than this year. While not a complete difference maker, 1,289 entries jumped in Day 1a of the 2018 edition of the GIANT (1,629 in Day 1a in 2017), which got its start at 7pm. How many of these players opted out of a 10am Colossus flight? How many simply opted for the GIANT instead of Colossus for their shot at a bracelet when faced with a choice?

Over the course of the first three years, there was over 62,000 entries in the Colossus. In that time, plenty of players have used this very tournament to take their shot and check the box that reads “play in a WSOP bracelet event” from their poker goals. It would be natural for there to be a decrease in attendance over time and for the notion of a six-flight tournament to cool off.

In 2015, the buzz in the room was palpable as players realized they were taking part in a historic poker tournament. In 2016, the momentum continued as organizers increased the prize pool guarantee from $5 million to $7 million. Last year, the WSOP bumped the guarantee again to $8 million and cleared it by a million.

This year, there was no such prize pool guarantee. For better or worse, there is a guarantee for a $1 million first place payout (which is also the marketing point for another WSOP staple, The Millionaire Maker).

Simple marketing fatigue may also be a factor in the Colossus downswing.

So, Is It Time To Retire The Colossus?

With diminishing returns and a massive dip in the 2018 player pool, is it time to retire the Colossus?

Nope. Not by a long shot.

We may be scrutinizing some miscalculations in terms of scheduling. Maybe there was a reliance of previous Colossal success to push the marketing. Perhaps more players had already “taken their shot” by the time Colossus IV rolled around, but this is still a great tournament and very likely to, once again, be the biggest tournament of the summer.

Next year (assuming WSOP organizers bring the tournament back) will be Colossus V. The fifth year of the tournament that changed the landscape of the WSOP. The anniversary provides a wealth of opportunity to not only make the Colossus bigger and better than ever but re-energize its recreational base.

A return to making the Colossus the primary and premiere opening weekend tournament would be key. Clear out the schedule of lower tiered buy-ins for the duration of the starting flights, slap a healthy ‘quotable’ guarantee on it and start the 5-year anniversary marketing hoopla well before the weekend to allow recreational players to make plans and the last-minute jet-setters to get in on the action early.

The Colossus may not ever reach the historic heights of its inaugural year, but it may see a spike in attendance and energy with a few key adjustments.