Multi Action Poker, an attempt to carry the increased action of online games into the live scene, has made its casino debut in the Aria poker room.

In Multi Action Poker, each player is dealt two separate hands, placed over a red spot and a blue spot, separated by a wooden slat, for the respective hole cards and chip stacks.

There are nine players, two dealers facing each other in the center of the table, four decks (two being shuffled, two in play), and ideally two different colored chip stacks. At Aria today, however, the colors of the chip stacks will not be distinguishable. 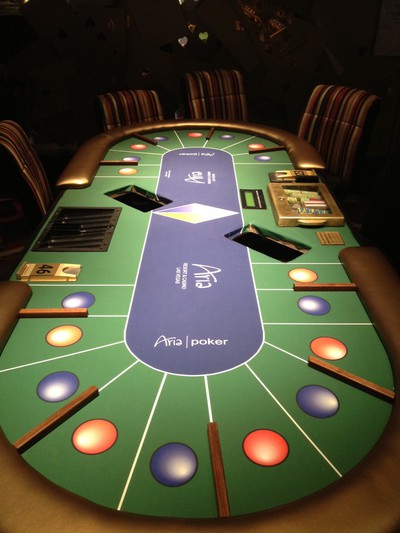 The table itself is busy to say the least — a green and blue felt, with white lines marking off the locations for the seats, the wooden dividers, the colored spots, two chip trays, two shuffle machines, and two rake boxes with different table numbers.

The specifics of what denomination games would be played were not revealed before the action started. But on Tuesday ARIAPoker tweeted: “Going to start with some limit hold’em, but will expand to anything demand dictates.”

Frazin said that in trial runs he has already worked out many of the kinks and concerns being batted around on the poker forums.

In the days leading up to the debut, players and dealers around the room speculated about the new game.

“There are probably few places that could pull it off, but I think we can,” one dealer told me.

Another said: “I don’t know how you can focus on this table. There’s so much going on.”

A player chimed in: “They’re probably going to call the floor every other hand.”

In each round of play, dealers will pitch hands from a red deck and a blue deck, cards that will be distinguishable on the front and back, Frazin said.

If a player takes a long time to make a decision on one hand, stopping the action, the other hand continues and the rest of the table is not left waiting on that one player.

“Any time there’s a long decision, the action (for the rest of the table) is going to be a lot quicker,” Frazin said.

Even the player who tanks on a tough decision will receive a new hand, but Frazin doesn’t expect that to slow down the play.

“If you’re going to stop and you can’t even look at those other cards, then you shouldn’t play this game,” he said. “You can do all those things and still go back and forth.”

Clearly, no limit might slow the game down more than fixed limit. 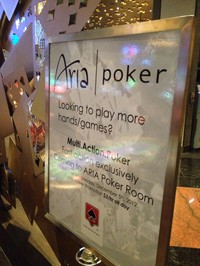 Any variant of the game can be played at the table.

“It’s limitless depending on the skill of the player,” according to the site mappoker.com.

Frazin said he first thought of the idea for the game in 2007, but temporarily shelved it. He has played a little bit online, but he’s mostly a live player.

“I like action,” he said.
For speed, it’s definitely better suited for limit games, but it’s not called multi speed poker, it’s called Multi Action Poker. If you want action, it’s built for action.
The two dealers at the table won’t necessarily be pitching cards at exactly the same moment, Frazin said.

“It’s just like you’re pitching around someone’s coke can or chips,” he said.

In test runs, he said, dealers instinctively paused when faced with an impediment.

You might recognize Frazin as the pizza parlor-owning, Magic 8 Ball questioning World Poker Tour player from a few years back.

He insists he didn’t consult the 8 Ball about Multi Action Poker, but he knows that a lot of players are turned away from live poker because it can become boring.

“I love the action,” he said. “And if you’re a casual player, this could draw you in.”

Aria Resort and Casino
A long-time journalist and poker player, Dave is a freelance writer in Las Vegas who has written for newspapers, magazines, wire services and websites. He digs around for stories across southern Nevada while regularly playing live low stakes no-limit hold’em.
Article published on December 06, 2012.
/pokerfu.se/hc7p

Hit the Road to PSPC with PokerStars Around the World

The biggest $25k game in the world is coming back in early 2023, and PokerStars is paving the road to the PokerStars…

PokerStars WCOOP Satellites: How to Qualify for the Main Event

The biggest online poker series in the world, the PokerStars World Championship Of Online Poker aka WCOOP has run for…

There has been a lot of interest in bringing more women into the game of poker, and one way operators like PokerStars…

WPT Global Will Name a Tournament After You & Other Schedule Highlights

WPT Global may still be a reasonably new operator, but over the last several months, the operator has established…