Rush Poker can now be played on multiple mobile devices, including Apple’s iPhone, iPad, iPod Touch and the web through their new HTML5 web client live at ios.fulltiltpoker.com.

Rush Poker, Full Tilt’s poker variant that allows players to “quick fold” and jump instantly to the next hand, has had a dedicated application for Android devices for over six months in the app store. However, likely due to iOS devices not supporting Adobe Flash, iPhone and iPad users have had to wait until now to play mobile. 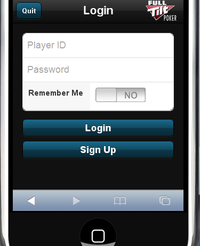 The Rush implementation is similar to the Android app. Once the user logs in – there is support for providing RSA login credentials – users are shown a lobby that covers play money and real money games for no limit, limit and PLO variants. The player pool is the same as on the main client.

In-game, touch-screen buttons for bet actions are provided, and the look and feel of the table is similar to that of the windows client.

Users can view their balance with the built-in cashier, however currently deposits and withdrawals can be performed only through the main client.