PokerStars VR, developed in conjunction with Lucky VR, combines the world of online poker with aspects of its live poker counterpart in a new virtual reality environment. Thus far, no date has been set for a full commercial release of the product.

Currently in a closed beta test, approximately 100 players have been invited to participate in the development of PokerStars’ latest free-to-play social poker experience in which they can play Texas Hold’em in a variety of exotic virtual locations while at the same time interacting with their opponents in an immersive gaming environment.

“PokerStars VR brings the social elements and the use of behavioral intelligence—the foundations of the live game—and combines it with the accessibility and speed of play of online poker,” James O’Reilly, Strategic Innovation Manager at PokerStars, said at a private demonstration of the product attended by pokerfuse earlier this summer.

Inside the World of PokerStars VR 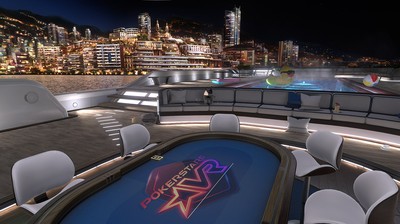 “PokerStars VR is a chance for us to take this amazing technology and bring something totally unique to poker players,” said Severin Rasset, Director of Poker Innovation and Operations at PokerStars.

Similar to the Table Themes feature in the PokerStars client that allows players to customize the look of their playing environment, PokerStars VR offers five virtual reality locations to choose from including:

Of course the actual poker play is of the quality one would expect from the leading online poker company in the world.

While the playing environment may be virtual, the players are not. Just like its online poker predecessor, the competition at the PokerStars VR tables are real people. There are no bots or computerized opponents. 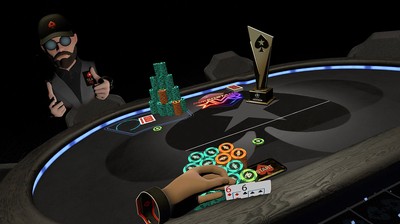 From a physics standpoint, the cards and chips react as one might expect. Cards bend and fly through the air just like they do in real life, and chips bounce and spin around the felt with uncanny reality.

Players can even order drinks, cigars and other interactive props including a donkey which gets tossed around at those that make bad plays at the table .

As is often done while playing poker at kitchen tables around the world and in casinos alike, in PokerStars VR players using the Oculus Rift virtual reality system can watch their favorites sporting events, movies or any other streaming video content while they play.

And the streaming media feature works both ways, allowing players to live-stream their play from inside the PokerStars VR environment.

“Poker is about interaction. It’s been bringing people together for well over a century. We’re really excited to invest in the next generation of the game and to give players the opportunity to meet in a brand new virtual reality dimension,” Rasset added.

It’s been a while since the live poker world was as active as it has been in 2022, following two full years of the…

Only One Week Remains Until PokerStars SCOOP 2022

The massive spring tournament season is nearly upon us, and tournament poker players of all levels have a lot to look…