Just weeks after Run It Once announced a revolutionary idea to distribute rewards to its players with its innovative feature “Splash the Pot”, Asia-focused GG Network copies the concept and comes up with its own model calling it “Cash Drops“.

What are Cash Drops?

Not all of the fast-fold tables on the GG Network, called Chinese Rush, will incorporate the new Cash Drops feature. Staring on February 27, the new rewards distribution method will debut on fast-fold tables with the name “Rush & Cash.”

Described as “the fastest poker game,” Rush & Cash will reward players with the equivalent of 65% rakeback via randomly sums of money that will be showered onto the tables.

“It’s the fastest poker game, yet at the same time, designed to satisfy our motto 'Let’s make Poker fun again!’ with 65% Rakeback in the form of Cash Drops,” GG Network described the game on its website.

GG Network will launch Cash Drops on February 27 at its Rush & Cash tables.

How is Cash Drops Different from Splash The Pot?

Unlike the Splash the Pot feature at Run It Once, which offers rewards equivalent to 51% of the rake collected at cash game tables, GG Network’s Cash Drops will be offering instant rakeback at the rate of 65%, which the network is claiming creates the “lowest rake in the industry”.

Another notable difference is that Cash Drops will range from 5 big blinds 500 big blinds. At Run It Once, splashes start at 1 big blind and go as high as 1000 big blinds.

“Cash Drops are injected without warning into the upcoming pot, providing all seated players with an equal opportunity [...] to get their hands on this extra juice,” GG Network wrote on its website.

“What’s more, every so often, 500 BB will rain down from above and automatically be added to each player’s chip stack, meaning players won’t even need to win the pot in order to claim their share of this amazing value.”

For instance, if a 6-handed table gets hit with 500 big blinds, every player on the table will be instantly awarded 83.33 big blinds and players can leave the table with added chip stacks. 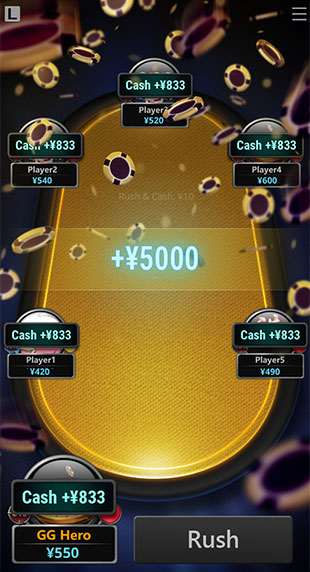 In Splash the Pot, players must win the pot to be able to claim the rewards. This stipulation adds more variance to the hand and to players’ rewards, considered to be the only drawback of the brilliantly designed scheme.

Another difference is that the Cash Drops will only be available at the operator’s fast-fold tables—which GG first added to its game offerings in November 2018.

Furthermore, Rush & Cash will be played with a Button Blind and an ante format—the same blind structure that PokerStars adopted for its Short Deck version called 6+ Hold’em.

In this blind structure, every player at the table pays an ante while the button pays a blind as well as the ante. Rake will be charged at 1/5 of the big blind.

Moreover, Cash Drops will initially be offered at only three stake levels, all denominated in CNY—the Chinese Yuan, or Renminbi—presumably to cater to the Chinese players. Buy-ins are automatically converted from the room’s main currency USD to CNY at the current market rate. The network plans to add more stakes in the “near future”.

Meanwhile, Run It Once offers splashed pots across all the stakes of its regular ring games including the Omaha tables. The size of splashed pots is based on the rake collected in previous hands. The company has said that the splashes are rake free.

To accompany the launch of Rush & Cash, GG Network will be giving away ¥680,000 (approx $100,000) in leaderboard prizes throughout the month of March. There will be a leaderboard for each of the three stakes and the network will pay out 900 individual prizes.

Run It Once’s STP program has been very well received and has been appreciated by all types of players for its innovative take on rewards. It is already proving to be a game changing innovation as within a couple of weeks of its launch, it has inspired GG Network to copy the feature.

STP is reminiscent of previous revolutionary innovations such as the introduction of the fast-fold variant by Full Tilt, lottery-style Sit & Go’s by Winamax, and progressive knockout tournaments introduced by Sky Poker but popularized by PokerStars in 2013.

All of these products have turned out to be immensely popular among both recreational players and professional players. It seems that the concept of randomized “Splashed” or “Cash Drops” is also heading towards becoming an industry-standard feature.

There will be gold bracelets for Ontario online poker players as well!