Like the regular Spins, 6+ Hold’em Spin & Gos are three-handed, fast-structured, winner-take-all format where the prize pool is determined randomly at the start of the game. The randomized payout ranges from 2x to 12,000 times the buy-in.

The blind structure, however, is different. It follows the “Button Blind” structure where every player pays an ante and the button pays an additional live ante. The same blind structure is also followed at cash games and tournaments.

6+ Hold’em Spins follows the new payout structure. Recently, PokerStars made big changes to the payouts of all Spin & Go games in a bid to lower the variance. The operator removed 4x and 6x multipliers and replaced them with 3x and 5x frequencies. It also drastically reduced the probability of hitting 2x multipliers. No changes were made to other multipliers. 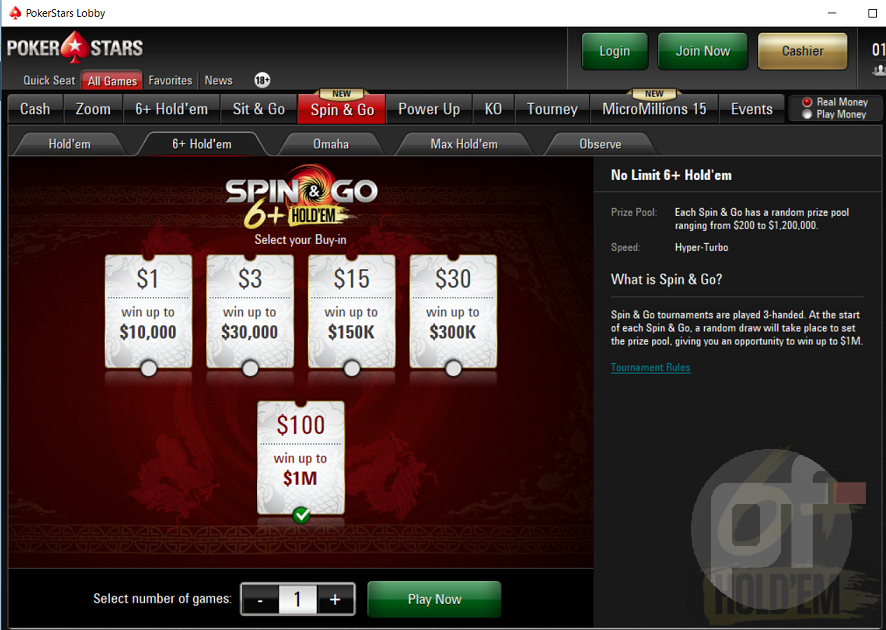 Currently, the game is available in most PokerStars jurisdictions where 6+ Hold’em is offered barring Italy and Sweden. The game was first trialed in Denmark before releasing it worldwide. It is available on .COM, .EU, .NET (play-money) clients, as well as in countries like Belgium, Bulgaria, Denmark, Estonia, Romania, Russia, and the UK.

Previously, PRO speculated that the room could soon be launching a lottery-style Sit & Go version of Short Deck. Two weeks after the prediction, 6+ Hold’em Spins are finally launched.

PokerStars becomes the first and only operator to spread the action-filled pack game of Short Deck in three-handed hyper-turbo randomized-prize pool format.

Short Deck has been around the poker community for several years. However, the game gained widespread popularity over the past year after it made its first televised appearance during the 2018 Triton Super High Roller Series in Montenegro.

The game is played similarly to Texas Hold’em, except the lower-ranked cards—deuces through fives—are removed, leaving a deck of 36 cards. Due to fewer cards, hand rankings are slightly different. Equities run very close to each other, meaning there is a lot more luck involved; hands like JT and AK are of equal value pre-flop.

The game has proved popular both live and online, with short deck events now a staple of most of the high stakes live tournament series.

In January, PokerStars launched its own version Short Deck called 6+ Hold’em in cash game format. Soon, the room spread the format in tournaments in both MTTs and Sit & Gos and it was even part of SCOOP and the ongoing MicroMillions series.