The global pandemic fuels a massive surge in online poker including PokerStars PA which is currently experiencing an all-time high in cash game traffic.

PokerStars Pennsylvania is enjoying an incredible growth in its cash game traffic as a result of the outbreak of coronavirus that forced many to self-isolate at home.

The lone operating PA online poker room is currently peaking at an all-time high, with its 7-day moving average rising to 622 concurrent cash game seats filled, a remarkable surge of 145% since the month started. It beats its previous highest level of nearly 500 seats seen during the first week of January. 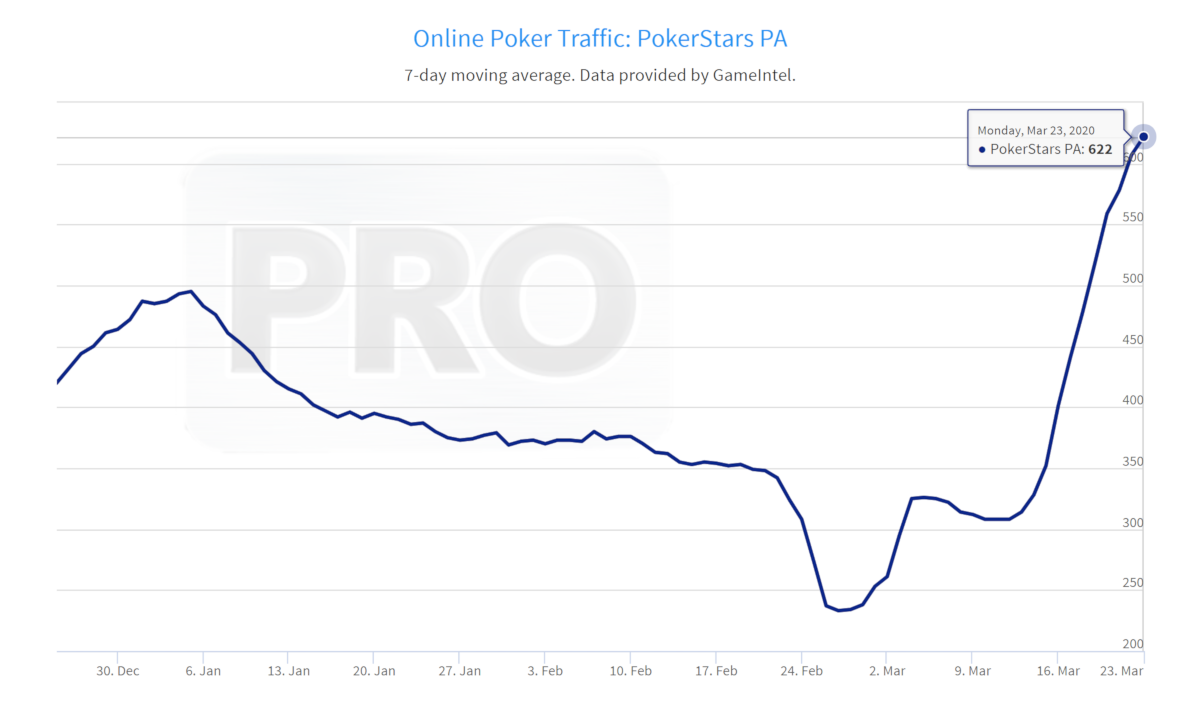 Expect that 7-day moving average to continue to soar as single day data points began spiking two weeks ago and continue to rise. As many as 720 concurrent cash game seats were occupied on Monday and that number is only expected to rise in the coming days.

The traffic counter displayed in the PokerStars PA lobby indicated that more than 3500 seats were filled on Sunday —its most ever at one time.

Not just the cash game traffic, but turnouts for tournaments also accelerated over the past two weeks. For instance, the Sunday Special on March 15 with a boosted guarantee of $50,000 attracted 830 entries to build a prize pool of $76,100.

A week later, the operator bumped its guarantee to $75,000 which ended up attracting 1149 total entries for a total prize pool of $105.4K—its most ever outside of a series. The tournament usually struggles to reach its $40,000 guarantee on a regular Sunday.

The operator also added a couple of new tournaments in response to the huge turnouts, including its $200 buy-in Bounty Builder which boasts a $15,000 guarantee and runs every other day during the week.

The spectacular spurt in PokerStars’ traffic in Pennsylvania comes in the wake of the global outbreak of coronavirus (also known as COVID-19), creating unprecedented turmoil across the globe.

Various businesses and industries have been impacted including the live poker scene with nearly all casinos and live poker rooms across the country forced to close, driving more and more players to online poker rooms. Not just PokerStars PA, but the online poker industry as a whole has seen a substantial uptick in traffic.

The US is among the countries most impacted by the virus after China and Italy. More than 50,000 people have been infected with the virus in the US, forcing many states to go under lockdown including Pennsylvania.

As things are not expected to settle down any time soon, the traffic could rise even further and potentially hit its highest levels of the year.

PokerStars PA should be welcoming the growth as the surge in traffic comes just weeks after the room recorded its lowest cash game traffic level in February. The traffic in late February fell to an average of 233 concurrent seats—a drop of 53% off its peak in January. The drop in traffic coincided with a drop in revenue generated last month.

According to figures released by the Pennsylvania Gaming Control Board (PGCB) for the month of February, PokerStars PA reported its lowest online poker revenue on a monthly basis in its brief four-month history. The operator generated $1.8 million—an average of around $63k every day compared with an average of $69k per day in January.

But with traffic rebounding strongly in March, PokerStars PA’s online poker revenue in the month could end up breaching the $2 million mark once again and possibly even break December’s record of nearly $2.5 million in revenue.

The trend is likely to continue in April as the operator is scheduled to host a $2 million guaranteed PASCOOP series starting April 4. This will be the operator’s biggest online tournament series in the US regulated market.