The operator saw a massive surge in traffic during the bracelet series, tripling its gross revenue for the month of August.

WSOP PA was the latest operator to join the regulated Pennsylvania online poker market. The site went live in July 2021, but it was quick to establish its foothold in the state. Thanks to several promotional moves—the biggest one being the first-ever online bracelet series for PA players—WSOP PA has managed to increase its market share to 25%.

The arrival of WSOP has helped the overall PA market value grow by 23%, boosting the gross income from regulated online poker to $3.2 million in August.

While PokerStars PA continues to lead the way, having contributed $1.9 million to the total, WSOP has managed to climb to the second spot, primarily thanks to the uptick it saw during the PA bracelet series. The room’s revenue surged from $242k in July to $819k in August and its market share increased from 9.5% to 25%.

These trends may very well be indicative of future developments. WSOP PA has managed to seize a significant market share from PokerStars, which reigned supreme in the market for several months as it used to be the only regulated operator in the state. In August, their market share dropped to 60% from 76% in July.

WSOP Pennsylvania launched in July 2021, entering the market dominated by PokerStars PA, one of the operator’s biggest competitors in the US. PokerStars already had a well-established presence in the state at that point, having launched back in March 2021 with zero competition.

However, right from the onset, it was clear WSOP had serious plans for the new market. The company launched with their new Poker 8 software, making PA players the first in the US to have access to the new and improved platform.

Shortly after the launch, WSOP PA announced the first-ever online bracelet series available only to those playing on the PA client. Featuring a total of eight events, the series offered great opportunities to claim one of the coveted gold bracelets in relatively small-filed tournaments. This proposition is probably the most important one for the big uptick the operator saw in August.

Despite not offering guarantees for any of the events, WSOP PA created a lot of interest in the player community. With buy-ins ranging from $400 to $1000 (and $3200 for the High Roller tournament), the room made going after a bracelet possible for pros and amateurs alike.

A Short-term Uptick or There Is More to It?

Although WSOP PA has enjoyed a great month and they continue the mission to attract players via events such as the Pennsylvania Circuit Series, the question remains if the August uptick will be short-lived.

Looking at the cash game data, WSOP continues to struggle to create significant traffic across the stakes. Even during the bracelet series, the operator peaked at around 30 players’ average. At the same time, PokerStars PA continues to average around 230 cash game players, according to data tracked by independent industry monitor GameIntel. 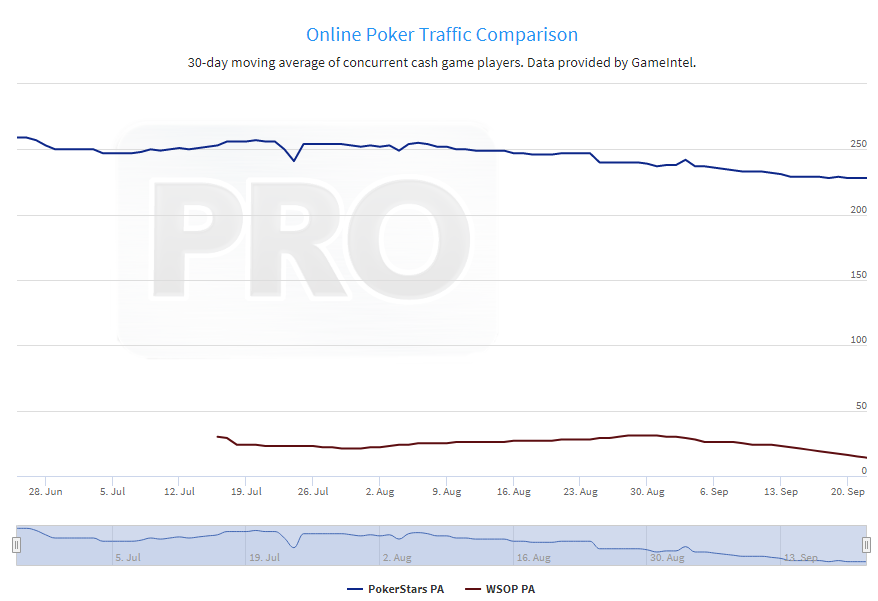 While online tournaments have traditionally been the strong suit for WSOP, establishing a strong base of cash game players is very important. These represent a source of constant revenue and are not limited to fixed time-frames.

The fact that the cash game action did not pick up more during bracelet events is somewhat strange. It either indicates that all the players flocking to the site were interested exclusively in playing tournaments or, which seems likelier, they prefer to play ring games on a different site where there is more action and it is easier to get a few tables up and running.

Moving forward, this could represent a significant problem for WSOP PA unless they can somehow incentivize tournament players to stick around for cash games as well. Perhaps a series of promotions targeted at achieving this goal is the way to go and WSOP has future plans along these lines now that they have established their presence in the market.

As for the bracelet events, the good news for PA players is that they will have another shot at a bracelet, as WSOP has recently expanded its schedule for the live section of the series with 11 online tournaments. Only one of these is targeted at the PA market, and it takes place on November 21, featuring the buy-in of $1000.

The tournament could definitely help WSOP PA see another surge in traffic around that time, but it might be just another short-term uptick. Since the conclusion of the bracelet series in August, WSOP has been experiencing a big decline in traffic despite launching the PA online circuit, so it might be time for the operator to start looking into new strategies to bring its player numbers back up again.