The XL Spring Series at 888poker concluded with over 20,000 entrants & more than $1.5 million in cash prizes awarded across the 37 events, making it an XL success.

888poker’s most recent tournament series has come to an end. The XL Spring Series, which ran from May 22 to June 7, featured 37 events with affordable buy-ins and ended up paying over $1.5 million in total cash prizes.

Overall, the Series was a massive success, as most events broke their guaranteed prize pools, and 20,017 entrants competed in various poker games and formats.

By the time it was all said and done, $1,538,695 had changed hands, with several winners taking home five-figure scores and getting a major tournament title to add to their repertoire.

Brazil was the nation with the most wins in the Series, with five of the 37 winners coming from the South American county, followed by Germany with four, and Canada, Argentina, Lithuania, and Montenegro with three each.

With another major tournament series now in the bag, 888poker will be getting ready for the next big festival, offering players plenty of chances to win cash in freeroll tournaments through its newly launched Royal Quest promotion.

Main Event Was the XL Highlight

As usual with most tournament poker series, the XL Spring Series Main Event was the festival’s highlight.

A total of 240 players made the money in the Main Event, with first-place going to Andorra’s “Instinctym,” who took home $65,608, the biggest cash prize of the whole Series.

Six other players made five-figure scores in the Main Event as they battled it out on an action-packed final table that was live-streamed via 888pokerTV and took 90 minutes to play out.

Other Highlights of the XL Spring Series

While the Main Event was by far the biggest tournament of the Series, high rollers had a chance to battle it out in a $525 buy-in High Roller, which featured a $50,000 prize pool and awarded yet another five-figure score to the winner.

That event failed to meet the $120k guarantee by just a fraction, with a top prize of $18,576 paid out to the eventual winner.

The most successful player of the Series in terms of poker bling was Argentina’s “leon_dies10” who managed to win both Event #6 and Event #28, winning a total of $7k throughout these two $55 buy-in tournaments.

It is also worth noting that 888poker was successful in meeting almost all the guaranteed prize pools, with Events #4, #14, #16, #17, and #25 just barely missing out on smashing their guarantees.

It is worth noting that even these events managed to cover the guarantee with some of the rake included in the prize pools, which means this XL Spring Series was a complete success for the operator, whose tournament series have been getting bigger and better with each passing season.

Get Involved with the Royal Quest 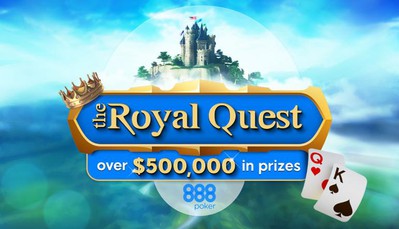 With XL Spring Series now in the books, 888poker players will have to wait for the next tournament series but, in the meantime, have a chance to win some extra cash.

The Royal Quest promotion offers a series of challenges for all 888poker players, giving you the chance to win seats into daily $500 freerolls, weekly $5,000 freerolls, and monthly $50,000 freerolls.

The challenges are simple enough for every real money player out there, making entry into the big $50k freerolls a real option for all who give it some effort.

The Royal Quest tournaments are already underway, and all you need to do to play is set up your 888poker account and start completing the royal challenges at the poker tables.

888poker’s The Festival Online Smashed All of its Guarantees

With the dog days of August upon us, 888poker’s The Festival Online (TFO) has concluded, and the operator will…

Ever since Winamax introduced lottery-style sit and goes with their unique-at-the-time Espresso format, the popularity…

888poker’s The Festival Online Is Well Ahead of Guarantees

With more than $750,000 in guarantees for The Festival Online, and the series more than halfway finished, 888poker will…