After a day’s downtime during the migration, InterPoker re-opened its website Friday at its new home on Ongame.

The veteran online poker room, which has been dealing cards online since 2002, first announced it would be moving off SPIELO’s IPN Network (commonly known as Boss Media) earlier this month.

InterPoker players should notice a significant bump in traffic: there are more than double the number of average active cash game players on the new network. 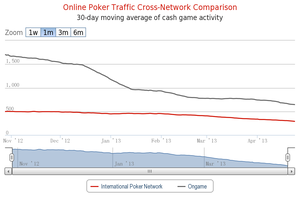 Danish players will have to find a new home. According to a migration FAQ, the new platform has not been approved by the Danish Tax Authority (SKAT) and therefore accounts will not be migrated.

For InterPoker, it is a return home of sorts. Its sister site Intercasino, the first ever online casino, debuted on Cryptologic software. Poker was on the Cryptologic Poker Network, and when this closed in March 2010, it moved to IPN.