PokerStars has dealt its 100 billionth hand.

The sweat was almost unbearable at the microstakes game as the flop came down A-2-J all clubs. Two players held a club, but Microulis69 was leading with the J-5 of diamonds.

A deliberately slowly dealt turn and river changed nothing, and the financial crisis in Greece will be a little less painful for this lucky player.Between them the players at the appropriately named table Euryalos XI picked up an extra $169k.

And well deserved congratulations to PokerStars!

The other participants in the hand who all win over $10k were: 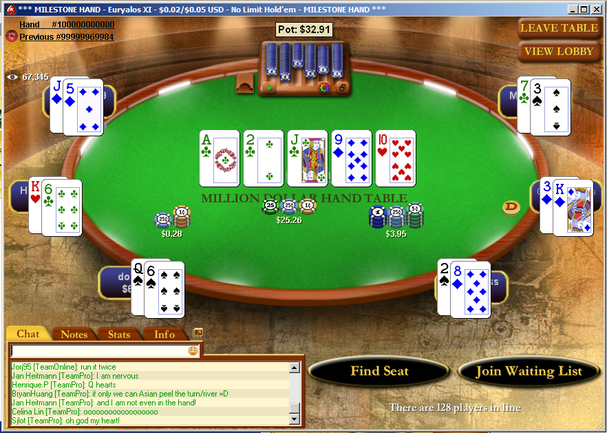 PokerStars
Jocelyn Wood, Editor Joss is a graduate in English from the University of Birmingham and has a Master’s Degree in Organisational Development from the University of Manchester. His career path has taken him from the British Army, through business & finance to seven years as a successful professional poker player. His experience of the European Union, law, accounting, finance, regulation and online poker provide the basis for his insights in the PRO specialist categories of Industry and Law & Regulation. As CEO he steered his own company through full Financial Services Authority regulation, and was asked by Morgan Stanley to take their UK mortgage business through the same process. Although British, he lives in Arequipa, Peru, set high in the mountains and surrounded by volcanoes. He is married to a Peruvian and has three children.
Article published on June 13, 2013.
/pokerfu.se/s9q4