Dreyfus: Fantasy Poker Manager is about Promoting Poker as Sport and Entertainment

We sit down with Zokay’s founder to understand his plans and motivations for his new social game.

Earlier this week, pokerfuse had the opportunity to chat with Zokay CEO Alex Dreyfus to understand the mechanics of the game, his motivations behind the product, and plans for the future.

So how exactly does Fantasy Poker Manager work?

“We wanted to make the game play very simple. We designed a layout that looks more like a game than a trading website; It is very easy to play. You have a $1m budget to draft your poker team. Each player has a current Market Price.

Depending on the landscape of the US regulated market, I can see Fantasy Poker Manager becoming a significant affiliate. “You can define your team for every major poker tournament on our schedule (EPT Deauville, WPT, LAPC, etc). Once the event is over, your players are assigned the points they earned during the event which they get for finishing in the money. The cumulative points earned by your team are then posted on the leaderboard.”

What determines the Market Price of each player?

What can you do with “Loyalty Points?”

“You use them to increase your budget—allowing you to buy better players. You earn them by playing the game. There are also 52 achievements that will earn you extra Loyalty Points.”

What are “agent fees?” 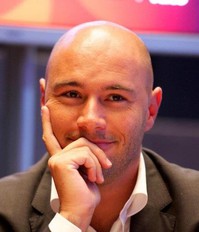 “Players will have to 'pay’ a 5% agent fee every time they sell a player from their team. This is to avoid too many transactions that could cause artificial fluctuations in Market Price. It also adds more strategy to the game because now there will be value in keeping players even if they don’t play an event.”

How do you determine which events will be a part of the competition?

“We already have determined the calendar of events up to the WSOP. It includes all the Main Events of the WPT, EPT and some others like the Irish Open.”

How do you determine the list of players expected?

“We are building relationships with the tournaments organizers and GPI provides a lot of direct information from poker players. We have a list of players “expected” to play in the event, but we allow teams to add players up until the 'Shuffle Up and Deal’ of Day 2. By then, users will have access to the full list of players participating in the event.”

Can you win real-money or prizes?

“Not at this stage, for legal reasons. We could consider a type of 'sweepstakes,’ but we will not do anything before the end of the WSOP or even later in 2013.”

Are there plans for Fantasy Poker Manager to exist on any other platform outside of Facebook?

“We decided to release our game on Facebook first because we think it will be the easiest way to allow the most people to enjoy the game and enable us to implement all the social/viral features we have developed. The poker fans and community are very well represented on Facebook so it is, at this stage, the best home for the game.

Our goal, in the ecosystem of poker, is to promote poker as a sport and as entertainment. “With the technology being based on HTML5, it allows us to be outside of Facebook. But I don’t think we will do that in short-term.”

Facebook allows real-money games in the UK. Are there plans to allow players to compete for real-money in jurisdictions where online gaming is legal?

“That is something we have considered, but at this stage that’s not our strategy. Our main objective is to welcome poker fans and the poker community to our product and provide additional ways for them to enjoy the great game of poker.”

Will we see Fantasy Poker Manager or GPI as brands in the online poker market?

“Never. That is a commitment I have with all our partners. I have operated online poker websites in Europe, and I know the market very well. However, we will not compete with online poker rooms, poker tours or casinos. I’m building tools to support the growth of the poker industry, and to help aide its transition into the mainstream.

Later, if the product works well, we will shift our focus to become more 'mainstream’ by working with sports media outlets and major internet portals “Depending on the landscape of the US regulated market, I can see Fantasy Poker Manager becoming a significant affiliate. I think our exclusive content and very engaging product position puts nicely should that business model continue as a major source of player acquisitions. But we will have to wait and see.”

How do you plan to market Fantasy Poker Manager?

“One hundred percent of our target audience is comprised of poker fans. So our marketing efforts until the end of the World Series of Poker will be focused on the poker community and poker fans. We will reach them by establishing strategic partnerships all over the world.

“Our potential users include the 50 million poker fans at PokerStars, the 35 million players a month who play on Zynga Poker (or poker on Facebook) and the +40 million North Americans and Europeans that play fantasy sports.

“We are building dedicated leagues to promote strong user interaction. That should increase the audience of our partners while promoting poker players and poker events. In parallel, we will have a presence on the ground at major poker tournaments in US and Europe, as we already do with Global Poker Index. The two brands will be promoting poker together, they will serve each other.

“Then, later in 2013, if the product works well, we will shift our focus to become more 'mainstream’ by working with sports media outlets and major internet portals. Our goal, in the ecosystem of poker, is to promote poker as a sport and as entertainment.

“Once we reach the core of the poker fans, we will look to enlarge the audience and educate new people about the poker world. And what better way to do that than by promoting poker celebrities.”

Which State is Next for US Online Poker? Part IV: Indiana