Full Tilt Affiliate Payments Will Not be Honored, Players Will be Untracked

Wiping the slate clean: existing affiliate relationships will not be carried forward when Full Tilt comes back online in November.

Payments owed to Full Tilt Poker affiliates will not be paid, and player accounts will not tracked to old affiliates when the website comes back online next month, pokerfuse has learned.

In addition, players who were also affiliates will not be reimbursed for any money in their Full Tilt account that came from affiliate payments.

The Rational Group, the parent company that operates PokerStars and now owns Full Tilt Poker, “did not assume any liabilities” of FTP beyond non-US player balances, according to an email sent to affiliates today.

“Therefore,” it continues, “previous contractual agreements that Full Tilt Poker may have had with affiliates were excluded. As such, The Rational Group is not liable and will not pay for any affiliate earnings.”

When Full Tilt Poker comes back online on November 6, there will be no affiliate system in place. A new affiliate program, which will be combined with PokerStars, is planned for the first quarter of 2013, at which time affiliates will have the option to continue to promote the brands.

Affiliates earn a comission for referring players to a poker site which, in the case of Full Tilt, was a percentage of rake generated by the player for the lifetime of the account. With high-volume players raking thousands of dollars a month, affiliate accounts were very lucrative.

When Full Tilt Poker went offline, it not only owed hundreds of millions of dollars to US and non-US players, it also had significant outstanding payments to affiliates.

Although it is unknown how much was owed, PokerStrategy.com, the biggest poker affiliate worldwide and a significant FTP promoter, filed a lawsuit in August 2012 for $1.2m against FTP company Pocket Kings, alleging unpaid payments. It claims it was sending up to 30,000 new players a month to the poker room.

Although not explicit in the email, given that “previous contractual agreements” were not part of the deal, it seems clear that affiliates will also lose their relationship with referred players who choose to continue to play from November.

The email to affiliates also states that for accounts “where player funds are commingled with funds derived from affiliate earnings,” only the portion from winnings will reimbursed.

The decision today was expected due to the nature PokerStars acquired the assets of FTP. The announcement of a change in VIP system that sees the end of an affiliate-based rakeback with a replacement for in-house system confirmed the plans to rehaul the system and keep it more inline with how PokerStars operates.

Players who had funds in their accounts and also earned additional money through friend referrals may not have been expecting that they would not receive a full reimbursement on their balances, however.

The email, thanks to @cardplayerlife, is embedded below: 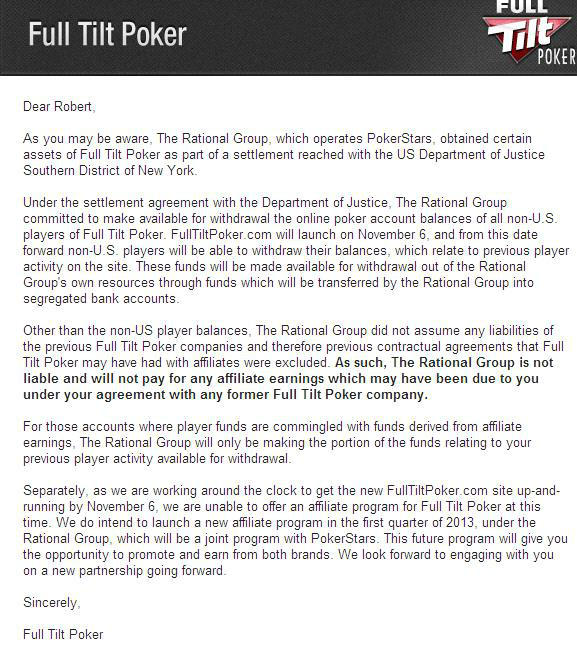