Generating more than $3 million in March, PokerStars PA is poised to set another record month in April.

Online poker in Pennsylvania generated $3.1 million in revenue during the month of March according to figures released Thursday by the Pennsylvania Gaming Control Board.

Not only does that make it the most successful month on record for the fledgling Pennsylvania online poker market, March bested the previous high watermark of $2.5 million (set in December 2019) by nearly 27%—a number made even more impressive given revenue in the market had had two consecutive months of declining revenue to start the year.

PokerStars PA, currently the only site authorized to provide legal, regulated online poker in the state of Pennsylvania, saw its cash game traffic soar following orders by the Pennsylvania Gaming Control Board that all of the state’s land-based casinos close to prevent the spread of COVID-19 on March 16.

According to traffic statistics tracked by independent industry monitor GameIntel and available exclusively on the Poker Industry PRO Data platform, at the time, the 7-day daily average of number of cash game seats occupied was just above 300, having rebounded from its low point of 233 towards the end of February. 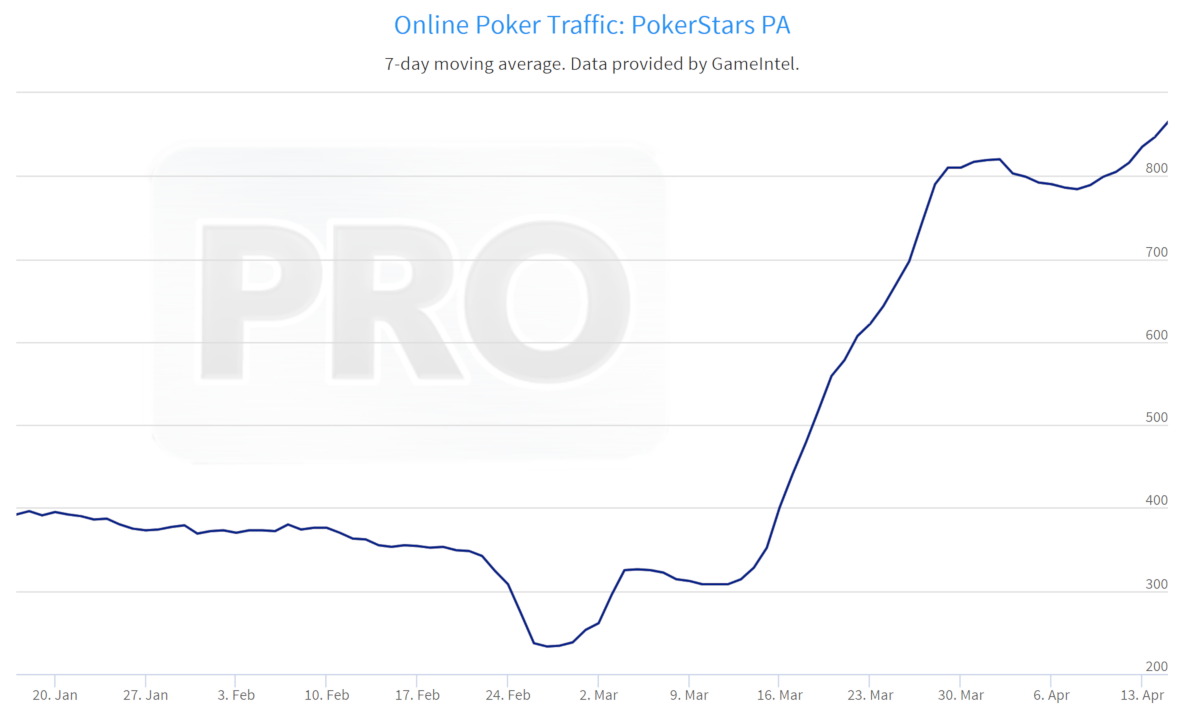 From there, traffic rose steadily to 820 concurrent cash game seats filled before falling back to 784 during the middle of last week. However, with the $2 million guaranteed PASCOOP (Pennsylvania Spring Championship Of Online Poker) series running in Pennsylvania, spillover traffic from the tournament series helped cash game traffic to begin to climb again heading into the weekend.

With cash game traffic continuing to hover around its high point and PASCOOP offering $2 million in guaranteed prize money, it looks like April will likely be another record month of revenue for Pennsylvania online poker.

In fact, total guarantees for its online poker tournament series appears to be a good barometer for the revenue of PokerStars PA for that month.

Since there was no tournament series in March, we will have to wait until the April revenue figures are reported to see if the trend continues, but if cash game traffic figures are any indication, Pennsylvania online poker revenue will reach another record high in April.

Revenue from online slots and table games also increased to record levels in March with a total of $21.1 million reported by online casinos.

Rivers-Philadelphia led the market with $6.8 million in revenue with $4.8 million coming from online slots.