Though online poker in PA is trailing its NJ neighbor, there are a few things that could happen soon that would inject more life into the market.

Pennsylvania online poker generated nearly $2.4 million in revenue during the month of September, according to figures released by the Pennsylvania Gaming Control Board (PGCB) last week.

Revenue from September marks the lowest point since the onset of the COVID-19 pandemic which caused Governor Tom Wolf to issue a series of preventative measures during the month of March including the statewide closure of all “non-life sustaining businesses” on March 19.

In addition, the online poker revenue from September was low enough to rank behind a non-pandemic month ($2.5 million was collected in December 2019) for the first time.

The low revenue amount would have been even lower were it not for the Pennsylvania Championship of Online Poker (PACOOP).

An uptick in cash game traffic coincided with the 2020 running of PACOOP which started on September 19 and spilled over into the first week of October. Such an uptick normally translates into higher revenue for the operator. Add to that the likely increase in revenue from the tournament fees collected during the series, and it is clear that PACOOP helped the market avoid an even worse September. 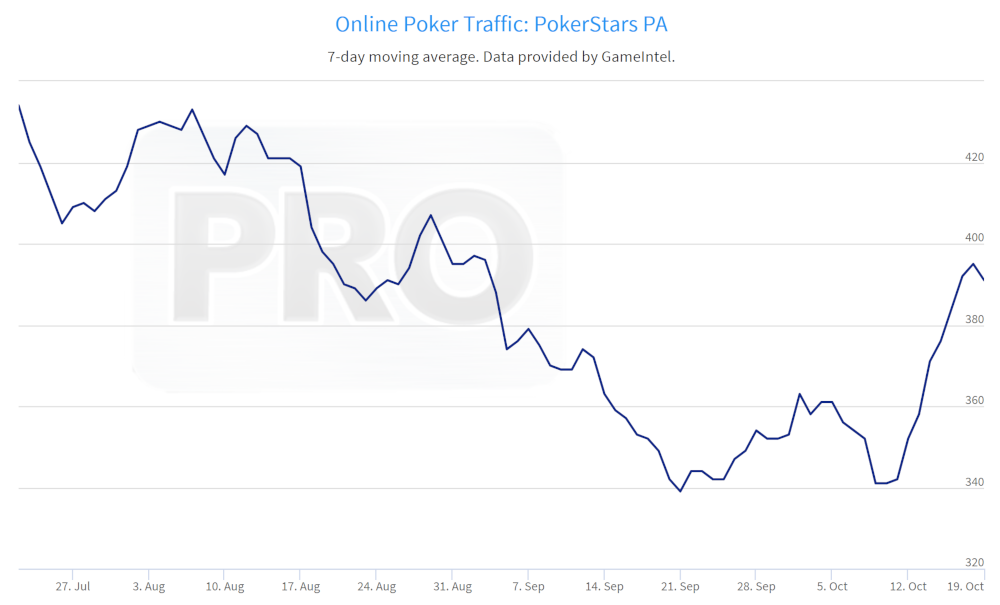 Since online poker first went live in Pennsylvania in November 2019 it has generated $32.7 million in revenue.

Despite a population that is 38% greater than the neighboring state of New Jersey, revenue from the virtual poker tables in Pennsylvania was 7.5% less in September, continuing a streak that started in June.

In fact, New Jersey online poker has outperformed its Pennsylvania counterpart through the first three quarters of 2020, $30.9 million to $28.3 million.

With the exception of July when New Jersey benefited from the World Series of Poker moving it tournaments online to WSOP.com, the trajectories of the two states appear quite similar, though notably, New Jersey is still firmly in the “new normal” phase following the spring peak that resulted from the lockdowns while Pennsylvania saw September dip below a recent pre-pandemic month for the first time.

Why is Online Poker Declining in Pennsylvania?

The decline that is being seen in revenue amounts generated from online poker in Pennsylvania is not all that surprising. Online poker in the US has traditionally moves into its low season in the summer and fall until the calendar progresses towards the holiday season, a high time for online poker. Of course, thanks to multistate liquidity sharing, an exception exists for the period of the World Series of Poker.

But beyond the seasonal downturn, the state’s online poker market is likely suffering from the current monopoly enjoyed by PokerStars PA.

Without a competitor, PokerStars PA has less incentive to offer lucrative promotions and put on guaranteed tournament series, both of which have proven to attract players to the virtual tables.

In addition, being the sole operator in the market places all of the burden of awareness that online poker is now fully legal and regulated in Pennsylvania on its shoulders – the rising tide of awareness lifts all boats.

But the lone wolf status of PokerStars Pennsylvania is expected to change soon.

What Could Boost Online Poker in PA?

At the last meeting of the Pennsylvania Gaming Control Board (PGCB), 888 had its online gaming application approved which has cleared the way for the operator to launch in the Keystone state when it is ready.

Such a launch could include an 888-branded online poker room (888 PA), but it could also mean that poker players in the state could see the launch of WSOP PA, as 888 provides the software platform for WSOP.com in both New Jersey and Nevada.

The Pennsylvania market could also benefit from the partypoker US Network. ROAR, MGM and partypoker parent company GVC have their applications pending with the PGCB, and they could receive final approval as soon as the next meeting on October 28 which would the next step to making partypoker PA a reality.

The other major event that could boost online poker in Pennsylvania is the favorable settlement of the Wire Act case. If the New Hampshire Lottery is able to prevail over Trump’s Department of Justice, the case could still be appealed to the US Supreme Court, but there is no guarantee the highest court in the land would hear the case, and if Biden defeats Trump in the November election, the DOJ will most likely abandon its opposition to interstate online poker under the new administration.