The 2014 WSOP Crowns its First Millioniare

Jonathan Dimmig has won his first bracelet, $1.3 million in cash and the status of being the first millionaire created in this year’s WSOP.

The Millionaire Maker produced the second largest tournament field in live poker history, as 7,977 entries generated a prize fund of more than $10 million.

Dimmig made the final table with a modest stack. Stephen Graner had almost all of the final nine out-chipped by 3 to 1 when play started, but his stack couldn’t carry him to the end and he left in a disappointing 6th place.

Heads up play only lasted for five hands, as when the money went in on a 332 flop. Dimmig’s 62 held up and second placed Jeffrey Coburn failed to spike the king or queen he needed to avoid defeat.

Dimmig turned professional around 18 months ago and told WSOP Media Director Nolan Dalla, that he hoped the victory “is a sign of good things to come.” He is from Buffalo, but moved to Las Vegas to pursue his professional poker career after deciding that he could make more money playing part time than he could working at his full time job.

Event #9 saw another debut bracelet winner as Californian Jeffrey Smith made the biggest score of his life, taking home over $323,000.

Smith found himself heads up against a formidable opponent in the form of Danny Nguyen, who notably busted all five of his final table opponents in the 2005 World Poker Tour Bay 101 Shooting Stars event. To do so Danny benefited from several bad beats which gave him the reputation of being extremely lucky.

Immediately before the final hand against Smith, Nguyen doubled up when his Q-T beat 2-2 all in pre-flop. Such luck can’t last, and Smith caught A-9 on the final hand which held up against a shove from Nguyen holding Q-6 suited.

The win was Smith’s second WSOP cash. His first was in the Millionaire Maker last year when he came in 605th. 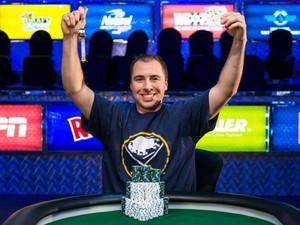 The $10k Omaha Hi-Low event gave Brock Parker a third bracelet to the two he won in the same week during the 2009 series. Along with the bracelet Parker takes home $443k, the second highest score of his career.

His heads up opponent British player Richard Ashby was trying for his second bracelet, having won a $1,500 Seven Card Stud event in 2010.

Eli Elezra, who was second in chips when play started for the day, faded and finished shy of the final table in 10th place.

Melissa Burr and Shirley Rosario provided a female presence at the final table, but their attempt to follow in Vaness Selbst’s footsteps didn’t succeed this time. Burr had to settle for 8th place, but Rosario survived until going out in 4th

There are just 10 players left of the 1,587 starters in the six handed $1,500 event, and Justin Bonomo sits in second place just behind chip leader Mike Sowers.

Bonomo is in with a chance of taking a bracelet after his second place finish in event #5 when he lost to Tuan Le.

Mike Sowers managed a tenth place finish in the $10k six handed event in 2011, so both chip leaders have previously experienced being deep in a WSOP bracelet event.

Event #12: $1,500 Pot-Limit Hold’em—A new event which has attracted 557 entries building a prize pool of three quarters of a million dollars.

Brock Parker Eli Elezra Jeff Lisandro Justin Bonomo WSOP
Jocelyn Wood, Editor Joss is a graduate in English from the University of Birmingham and has a Master’s Degree in Organisational Development from the University of Manchester. His career path has taken him from the British Army, through business & finance to seven years as a successful professional poker player. His experience of the European Union, law, accounting, finance, regulation and online poker provide the basis for his insights in the PRO specialist categories of Industry and Law & Regulation. As CEO he steered his own company through full Financial Services Authority regulation, and was asked by Morgan Stanley to take their UK mortgage business through the same process. Although British, he lives in Arequipa, Peru, set high in the mountains and surrounded by volcanoes. He is married to a Peruvian and has three children.
June 04, 2014
pokerfu.se/6sn7

Members of the poker community are demanding a "bigger, sexier" controversy after Bill Perkins' promises of a scandal "that would make the Mike Postle scandal look like a church service" fall flat. — read more »

Over $27 Million in Guaranteed WSOP Events on GGPoker This Weekend

One tournament that has consistently grown over the past few months is GGPoker’s signature tournament, GGMasters….

The WSOP.com Super Circuit Online Series is on its way to becoming the largest online poker tournament series in history.

As WSOP.com is peaking at its all-time high for traffic in the wake of the coronavirus lockdown, the popular US online…

The WSOP Super Circuit Online Series is all set to kick off this Sunday on the GGPoker network. With an unprecedented…