From Flying under the Radar to Poker’s Biggest Stage: The Incredible Story of Ramón Colillas

Until a few days ago, if you are not Spanish, you might not have heard the name Ramón Colillas. According to his Hendon Mob profile, until his incredible PokerStars Players No Limit Hold’em Championship (PSPC) win and multi-million dollar first place prize, the fitness trainer-turned-poker pro had only $10,000 in lifetime earnings.

But that picture is not exactly accurate. Ramón Colillas is something of a dark horse, and he triumphed here in The Bahamas after incredible successes in Spain which should have put him on many radars. But the Barcelonian flew under everyone’s radar.

And that was always his strategy. Colillas came to the Atlantis Hotel & Casino in The Bahamas, outlasted 1038 other players, among which were many of the world’s top poker professionals.

Ramón Colillas won his Platinum Pass by topping the leaderboard for the Campeonato Espana de Poker (CEP), a PokerStars-sponsored Spanish tour. While it might not be listed in the big poker results databases, this is not some small bar room poker circuit—it is one of Spain’s biggest live tours.

Each stop has a buy-in of approximately €500, attracts hundreds of players, and builds a prize pool into six figures.

Colillas cashed in three of the six circuit events to top the leaderboard and win his Platinum Pass.

Partly for that reason and partly because of his stack size—he was among the chip leaders from Day 3 onwards—Colillas did not pass us by entirely. We tried (without much success) to get a good picture during mid-tournament play, and we profiled him ahead of the Final Table.

In an interview conducted just before he took his seat at the PCA Main Event, we asked him (with the help of a translator), whether he noticed us trying to get a photo of him and if it bothers him when he is photographed at the table?

“When I’m on a table, I’m really focused. I’m trying to read my opponents, I’m paying attention to what’s happening on the table. So normally I don’t notice when people are recording me or taking pictures,” he said.

Does it surprise him that we were seeking him out early on in the tournament?

“That really surprises me, I don’t know why you would have the idea of focusing on me when I’m among some of the best players in the world!,” Colillas said coyly.

But the cat is out of the bag now—we, and everyone else, are on to him.

We asked him to talk more about his path to The Bahamas and the Spanish circuit event that he won.

“The CEP announced they had an agreement with PokerStars and the winner of the series was going to get a Platinum Pass. I live in Barcelona, and that was the first stop of the whole thing. So I went to the first tournament and I won the event,” he said matter-of-factly.

That was no simple task. The Barcelona stop attracted a field of 507 players and a total of 831 total entries. Among them were some of the toughest live and online grinders in Spain. 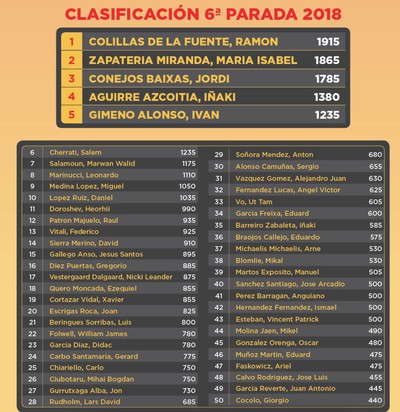 After making a deal heads up, he netted a career-high cash of €55,900. And it also put him on the path to tour the whole circuit.

“From that moment on, I committed to playing every stop in Spain to try and gain points for the leaderboard,” Colillas told pokerfuse.

He struck out in Donosti (the Basque name for San Sebastian, in the north of the country) in May, and Alicante in July. But in September, he managed his second cash in Madrid, finishing 19th out of 340 players. This netted him another €1500 prize and—more importantly—points for the leaderboard race.

He failed to cash in Marbella, so it was going to come down to the last stop—in Peralada, a village near Girona, just north of his home city.

“At the last stop, it was close to home again, in Catalonia. I was in third place on the leaderboard, so I needed to make the money to win the leaderboard and the Platinum Pass,” Colillas retold.

It went to the wire. Colillas just squeaked into the money—he finished 27th (30 spots paid), for €1450. But it was worth just enough leaderboard points to nudge out Isabel Zapateria for the top spot.

We asked Colillas what caliber of player one would find on these regional tours.

“It is somewhat split,” he said. “There are many recreational players in the CEP, but there are also a lot of regulars that play on PokerStars that are always there. Then there are some who come because it is close to home.”

“When you go to the cities where there are a lot of people, like Madrid, the level of play is a lot higher. So it’s all about the area you’re in. When you’re somewhere like, say, Donosti, where it costs more to travel there, people are going to go less—so it changes the level [of play] a bit.”

Cashing in three of six events in Spain, each with hundreds of players, is something quite special. But this is where the story gets even more incredible, because Ramón Colillas did not just win one regional circuit tour in Spain—he won two.

In November 2018, Colillas was crowned champion of the Campeonato Nacional de Poker 2018 (CNP), another big Spanish live tour. Th one is sponsored by 888, the second largest online poker operator in Spain.

Again, this series is not tracked on The Hendon Mob, and its existence is unknown outside of Spanish poker media. Even there, information of results is scant—particularly because the official website is currently offline.

But from some online sleuthing, we understand that these events are again at the €500 buy-in level and attract decent fields. Here, Colillas again got the circuit off to an incredible start, winning the stop in Valencia in February. He outlasted 500 players for a €34,400 payday. He then went on to cash in Bilbao in June.

On the GPI, he is incorrectly listed as Ramon Coli for the Valencia stop—which will have further helped him keep under the radar. The results for Bilbao and subsequent CNP stops are not tracked at all.

We asked Colillas about his efforts to keep his name quiet, and how that would change in 2019 after winning the PSPC.

“That’s going to change for sure! I think now I’m going to go to a tournament in Spain and people are going to congratulate me, come and play with me, but that’s good,” he said.

“I still want to get out and play those local tournaments. That’s where I started. As part of this package [that he won for the CEP leaderboard], I’m going to be representing the circuit. So I’m going to play all the stops this year.

Colillas is certainly going to have his work cut out for him. His CNP win also includes ambassador responsibilities—he told 888poker.ES on winning the Championship that he would be part of the “Pro Team of CNP 888” and would be “at all stops to try to win the title again” in 2019.

With both tours, the WSOP, and presumably 2019’s EPT stops, he has quite a year ahead of him. We asked him whether he thought he had a duty to be a poker ambassador after winning the PSPC.

“I think so yes,” he said, without hesitation. “I think at the end of the day, poker gives you very important values: Discipline, concentration, courtesy.”

“When a person is in the public eye—in this case that’s on me, because people are going to know me now—I think that I have to demonstrate these values and be an example of a good professional athlete, because that’s what poker is,” Colillas said.

“And that is going to translate into my daily life,” he finished.

The countdown is on for the second running of the triumphant PokerStars Players Championship (PSPC), and the operator…

The countdown is on for the return of the biggest $25k live game in history. The poker world is just three weeks away…

It has been a few years, but the biggest $25k game in history is back on the poker schedule for early 2023, and…

PokerStars Qualifier Gets to Use Platinum Pass After Three-Year Wait

It has been a bit of a wait for Patrick Winterbottom, but he is finally on the verge of being able to use his Platinum…