Three Sunday tournaments will have their buy-isn slashed in half on August 2.

It was less than a month ago when 888poker ran their first Sunday Sale and thanks to its popularity, it will be returning this Sunday, August 2.

According to the 888poker lobby, the Sunday Sale Mega Deep, Sunday Monsoon and Whale tournaments will all have their buy-ins cut in half once again.

Guarantees remain the same. That means there is $1350,000 to be won for half the usual price.

Last time the 888poker Sunday Sale ran, $173,950 in prize money was paid out due a field of 3,527 entrants turning out to play. This means there’s plenty of value to entering into these Sunday Sale tournaments.

All three events are No Limit Hold’em and registration is currently open! 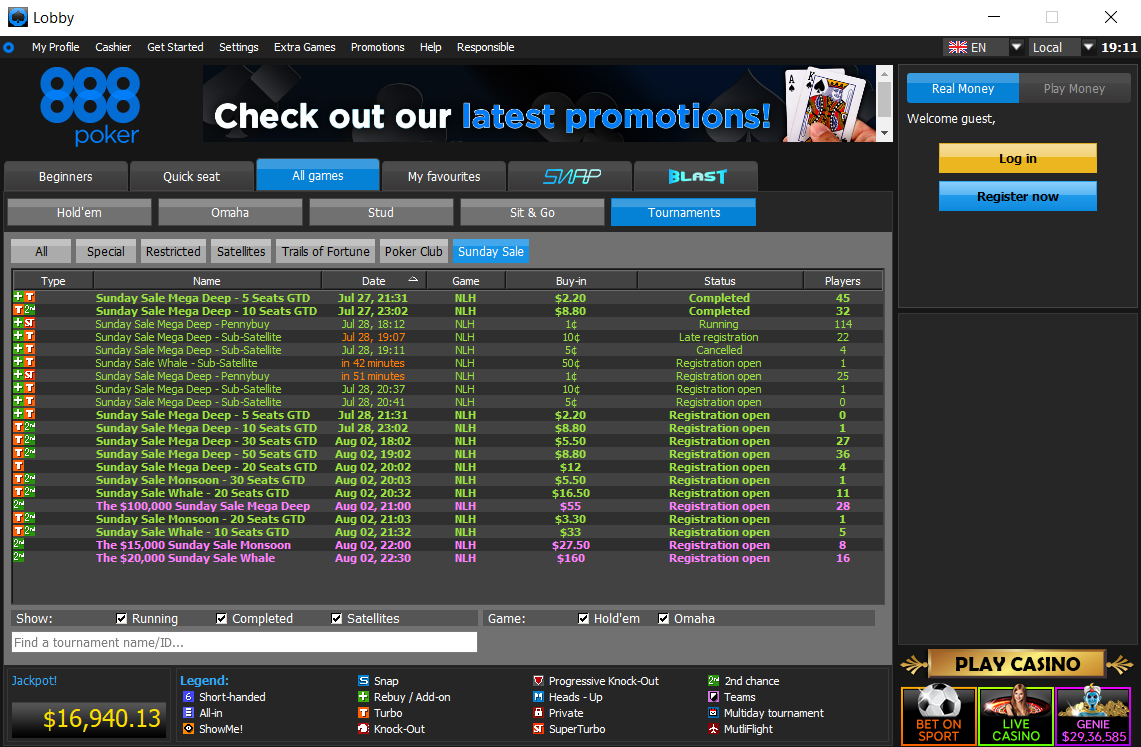 The 888poker lobby is also showing plenty of ways to get into the tournaments with a whole host of satellites running. Buy-ins start from as little as 1 cent and can all be found in the 888poker lobby.

You can relive the action from the July Sunday Sale Mega Deep tournament below. 888poker commentators, David Tuchman and Nick Wealthall took over the helm via Facebook and YouTube to bring you the live stream action.

This coming Sunday’s action will not be live streamed

The time will soon come to say goodbye to the Trails of Fortune promotion that has been running on 888poker since June.

Players will have until August 9 to win their share of $500,000 by completing missions that then gains them entry into one of three freerolls.

The 888Summit plays out with multiple Day 1s, running three times a day, before Day 2 plays each Sunday, guaranteeing $30,000.

Players that don’t want to complete missions can have two free spins on the “Hikers Loop Spinner” prize wheel, where tickets to the freerolls along with other prizes are being given away at random.

Depositors to 888poker are also getting a free spin on the Fortune Loop Spinner wheel when depositing a minimum of $30. Players that do this will also win a random bonus prize worth up to 5% to 100% of the deposit amount, up to $30.

Don’t forget there is also an Early Bird Rakeback promotion running until August 16, where players that register prior to the start of a tournament will be eligible to earn 10% back on all entry fees.

The rakeback earned by each player is limited to $500 per week.

Players must check their email for further details by 888poker on minimum buy-in requirements.

Sportsbooks Advance in Connecticut, But Poker Appearing as Low Priority

As regulators in Connecticut consider rules that will govern their future online gaming market, separate deals between…

July is huge on the WSOP/888 US Network as a third series is set to kick off for players in New Jersey and Nevada.

The wait is finally over. The World Series of Poker launches its online poker client in Pennsylvania on Monday, July 12.

In an exclusive interview with Poker Industry PRO to be published soon, 888 Holdings’ Senior Vice President and Head of…