888’s Poker 8 Software is Coming to WSOP.com in Pennsylvania, New Jersey and Nevada: Here’s What to Expect

The new desktop and mobile client on Windows, Mac, Android and iOS will be a huge upgrade—pokerfuse takes a closer look at the software improvements and features that players can expect when it goes live in US markets.

In January 2021, 888 Holdings and Caesars Interactive Entertainment (CIE) signed a multi-year extension for their existing partnership in the US market.

As part of the deal, 888 confirmed that they will provide their innovative Poker 8 client for WSOP.com in regulated US markets.

The software client represents a major upgrade for both desktop and mobile. Poker players in states where legal US online poker has been approved can look forward to vast improvements this year.

The launch in regulated US markets has been confirmed by Senior Vice President and Head of US at 888 Holdings Yaniv Sherman in a recent exclusive interview with pokerfuse.

He outlined the company’s specific expansion plans for 2021 with a launch in Pennsylvania as the top priority, with the goal of going live this side of the WSOP summer festival. The WSOP.com client in the Keystone State is slated to feature the Poker 8 software when it goes live. 888 also plans to go live with Michigan online poker as their next key market.

It is also expected to roll out the new software in other regulated states—namely WSOP Nevada, WSOP New Jersey and 888 New Jersey—thereafter.

888’s Long Partnership with the WSOP in the United States

The partnership of 888 and CIE dates all the way back to 2013 when the WSOP.com online platform was launched in Nevada. One year later, 888 became the official sponsor of the WSOP live festival in Las Vegas, a role it has retained ever since.

888 is also the software provider for the WSOP client in New Jersey online poker, as well as the three racinos in Delaware. During all these years of operating on the US market, the overall design of the software has barely changed. As a result, the major upgrade has been long-awaited and sought-after among players.

The trio of states represents the only cross-border liquidity sharing pool in the US right now. Cash game liquidity is shared but players based in Delaware are excluded from participation in the WSOP Online Bracelet and Circuit Events.

With the planned launch in Pennsylvania, the cross-border network could grow further and provide a significant traffic boost. However, this would require that the Pennsylvania Gaming Control Board (PGCB) joining the Multi-State Internet Gaming Agreement (MSIGA). The same hurdle applies to all other potential states, including Michigan.

But what makes the Poker 8 software such a big step forward compared to the current WSOP.com client? Pokerfuse takes a closer look at the client, which rolled out to global dot-com player pool in late 2020.

First and foremost, Poker 8 represents a tremendous overhaul for the overall design. It is the biggest leap forward in several years for the 888poker software client. What may have felt cramped in the previous layout has received a much cleaner and more modern look and feel in general.

All images are courtesy of our big brother publication Poker Industry PRO, which has published exclusive, in-depth coverage of the new software over the last 18 months. Of course, when this deploys to WSOP.com, expect it to be branded with WSOP’s logo and color scheme, but the overall design and features will likely stay the same.

The existing two-tab system has been replaced entirely and all different game types remain separated distinctively. The navigation bar has moved from the top of the main poker lobby to the left-hand side. Included in the fresh look are symbols for each specific compartments, which portray a more visual appeal compared to the previous monotone design.

The beginner’s lobby, players will find eight different quick launch tables for various formats in a modern and sleek design. 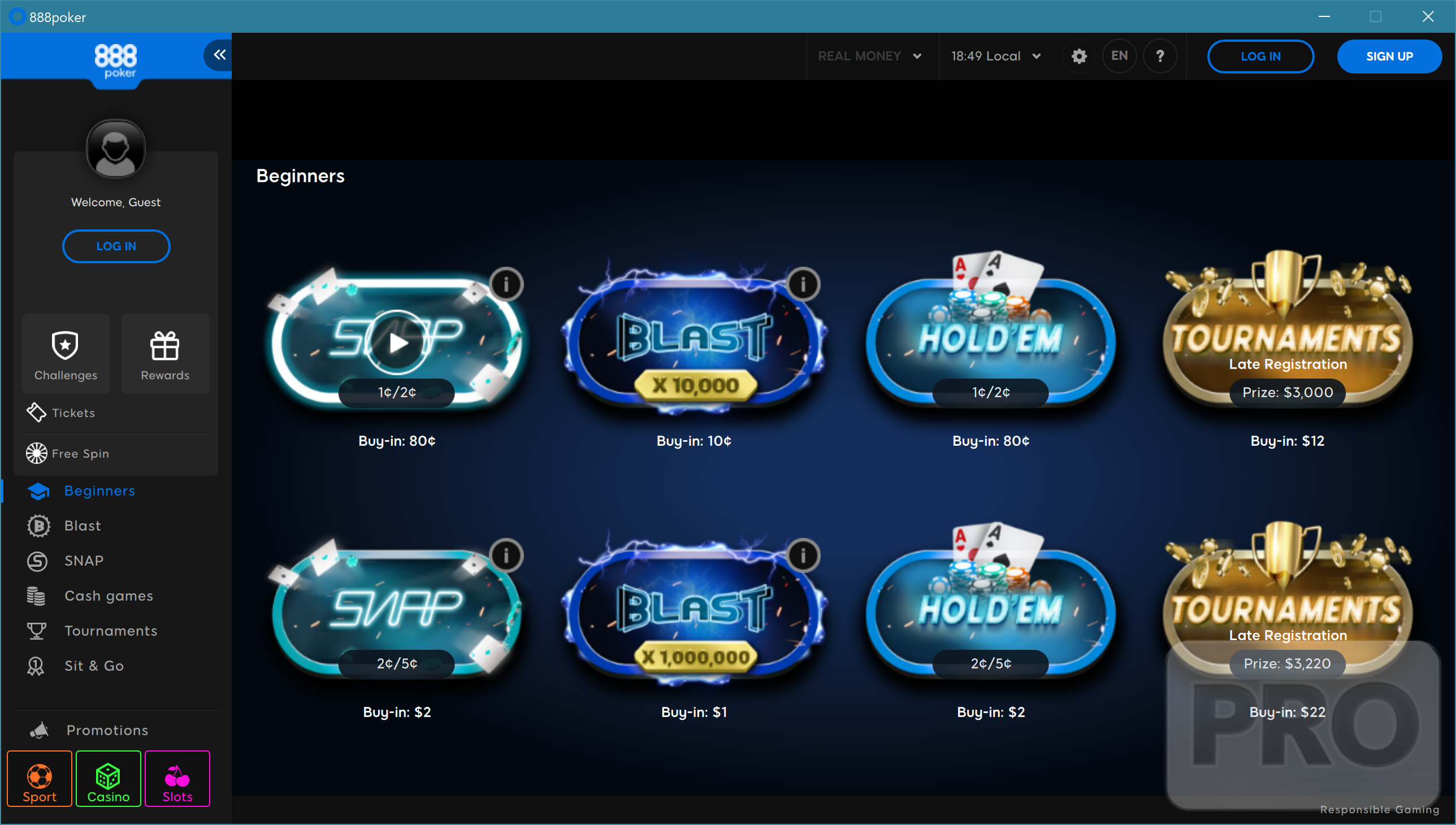 The Blast and SNAP lobbies showcase all available limits for the Fast-Fold cash game variant and jackpot SNG variant, respectively.

Perhaps the biggest visual improvement in the lobby design of the global Poker 8 software has been made with the entirely separate and dedicated cash game lobby. The navigation bar includes the available game types, stakes, table limit, and type. By clicking on each symbol, players can include or exclude the respective quick launch tables. 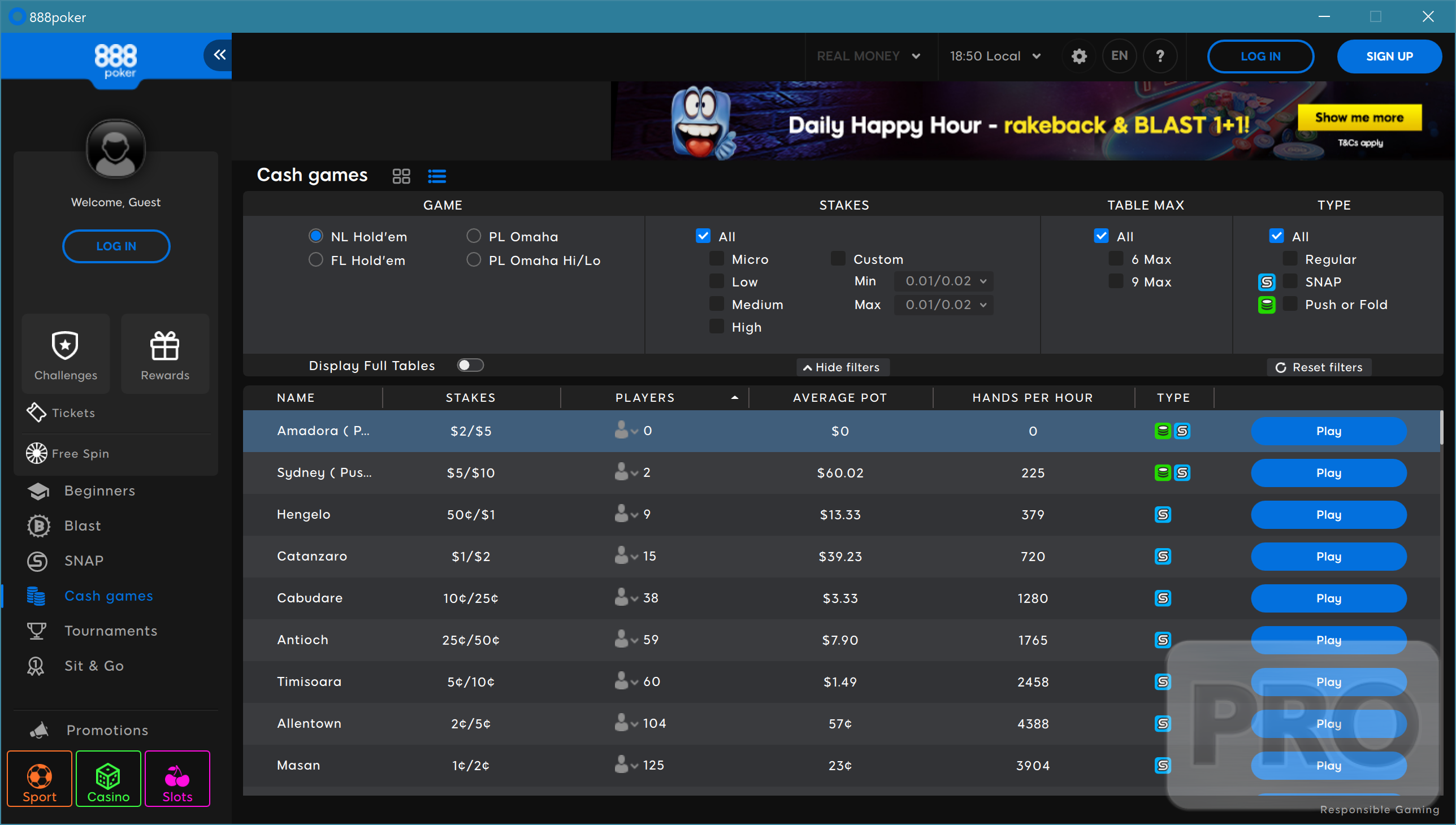 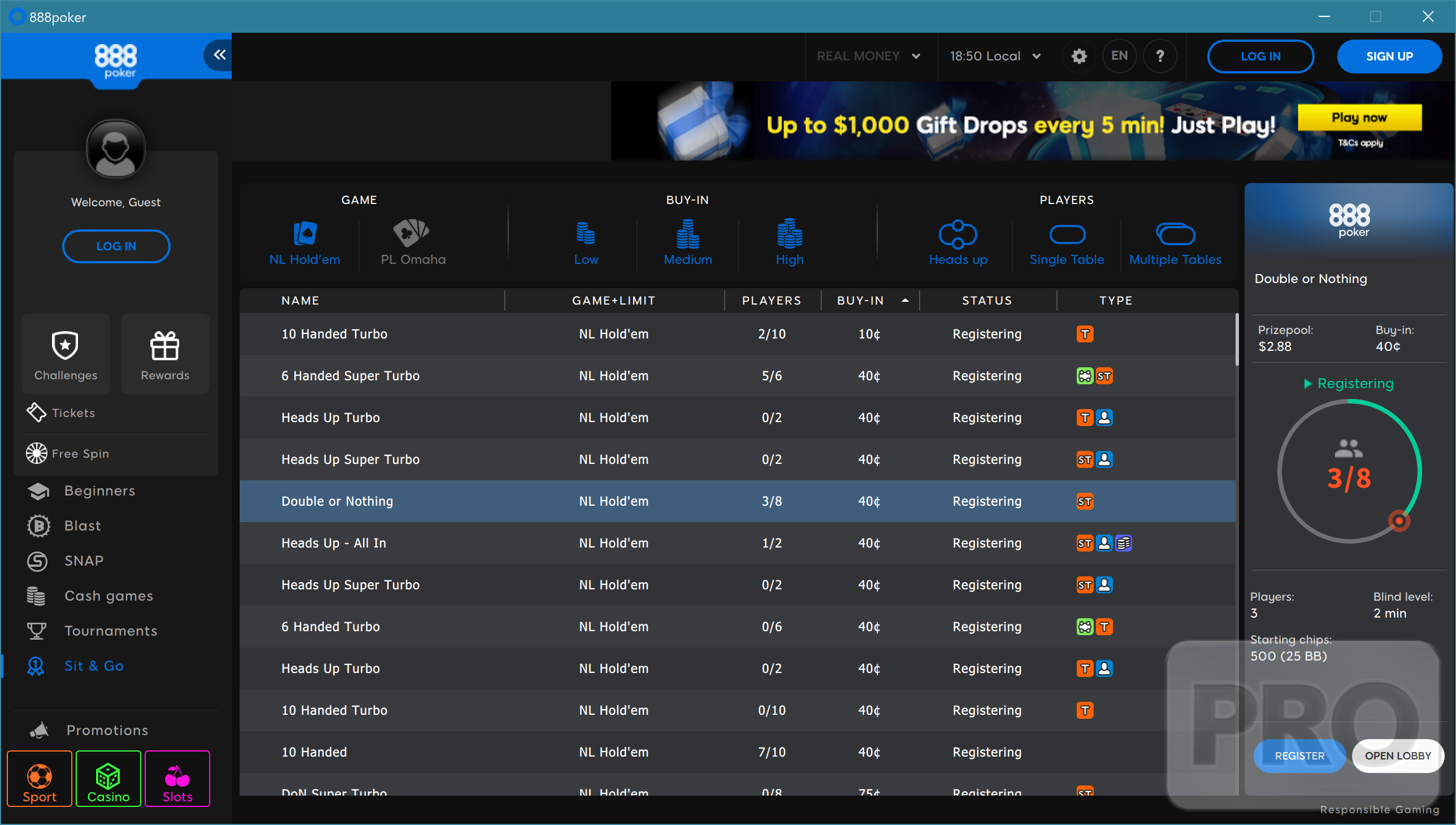 888 has moved the filter from below the main tournament lobby to a more distinctive filter system with a search function above all available tournaments. Players can select by game variant, category, buy-in, speed, and type with a simple click.

For each respective tournament, the lobby has received a fresh new look, and six different tabs showcase all required details. When moving between tabs, an instant swipe effect takes place.

The new layout of the SNG lobby is very similar to the fresh design of the main tournament overview. Three separate compartments are shown in the navigation bar on top including the game type, the buy-in, and the number of players. 888 has retained the same individual lobby design with six tabs for SNG as well.

Perhaps the most vital improvement for the tournament functionality itself will become available when Poker 8 goes live in the regulated US markets. So far, the WSOP.com desktop client in Nevada and New Jersey cannot run multi-flight tournaments. This will be possible in the new Poker 8 client, which opens the door for bigger guarantees going forward.

The new Poker 8 mobile client for Android and iOS also represents a major step forward. It was released for the global pool in October 2020 and 888 celebrated the launch with $1 million in promotions.

A fresh look and slick design across the entire client showcases the complete overhaul. The most notable visual change is the newly implemented portrait mode. Also included in the new mobile client are the same quick launch tables for all game types after log-in.

In terms of existing limitations and functionality, players are no longer limited to just one table at a time. The new Poker 8 mobile app allows for up to four tables at the same time.

Furthermore, Pot-Limit Omaha has become available recently for the global pool in the 8.4 mobile version. Until now, this is not the case in the WSOP.com client in Nevada and New Jersey. Four card aficionados are unable to participate in WSOP Online Bracelet and Online Circuit Events for PLO tournaments on the mobile client and have to rely on the desktop client instead.

Once 888, in partnership with WSOP.com, launches in Pennsylvania, the Poker 8 client for desktop and mobile is expected to become available in other regulated states soon after. Michigan was specifically mentioned by Sherman as the next key market.

They are then expected to provide Poker 8 for the WSOP.com client in Nevada and New Jersey in quick succession. A further expansion in more regulated states may also be on the horizon after the favorable developments in 2021 thus far.

If everything goes as planned, the Poker 8 software will become available until the summer in Pennsylvania. This may very well be in time for poker enthusiasts in the Keystone Stone to participate in WSOP Online Bracelet Events.

Is BetMGM Preparing to Launch Online Poker in Nevada?

The WSOP Rio Online Circuit Event gets Underway with $1,000,000 up for Grabs

WSOP’s popular Online Circuit is returning to WSOP Nevada and WSOP NJ for its latest installment. The Rio Online…