GGPoker Closes in on PokerStars in Global Cash Game Traffic

Exclusive: For the first time in 15 years, an operator is within 10% of PokerStars in terms of real money cash game play.

The online poker market is heating up as market leader PokerStars is facing serious competition for the top spot, pokerfuse can reveal.

GGPoker has established itself as the second biggest force in the market by a significant margin and is slowly closing the gap in terms of cash game traffic.

In the latest data provided by GameIntel, available exclusively on the PRO Data platform for subscribers, both operators are only separated by around 600 concurrent cash game seats.

That is a margin of less than 10%, the closest the pair have been in history and the first time any operator has got so close to dethroning the global online poker leader since the passage of UIGEA 15 years ago.

Both brands have already been locking horns for more than a year now and hosted some of the largest online poker festivals of all times simultaneously.

In April 2021, both went toe-to-toe with impressive Spring Festivals. In the meanwhile, the cash game traffic has seen both brands draw closer thanks to the slow and steady rise of GGPoker.

But where does GGPoker come from?

A Brief Look at the History of the GGPoker Network

Good Game Network, as it was originally known, was established back in 2014 with a focus on Asian markets.

With revamped marketing efforts on Europe, first through the Natural8 skin and later their own brands, the network was initially tracked in 2016 with more than 700 cash game players.

In March 2017, GGPoker surpassed more than 1,000 players for the first time. Soon after, the network expanded with new brands, including former 888 skin Lotos Poker.

After GGPoker obtained a UK Gaming license later that year, the network enjoyed a spike in traffic. However, they remained somewhat under the radar, on or around 1,300 cash game players until the summer of 2019.

Since then, the network has seen a steady rise in overall traffic with GGPoker becoming the distinct flagship skin. Furthermore, several European skins joined the network to boost the line-up. With major promotions, festivals, and international partnerships in the last two years, GGPoker has made it clear that their intention is the number one spot.

And it is no longer far away from reaching that goal. 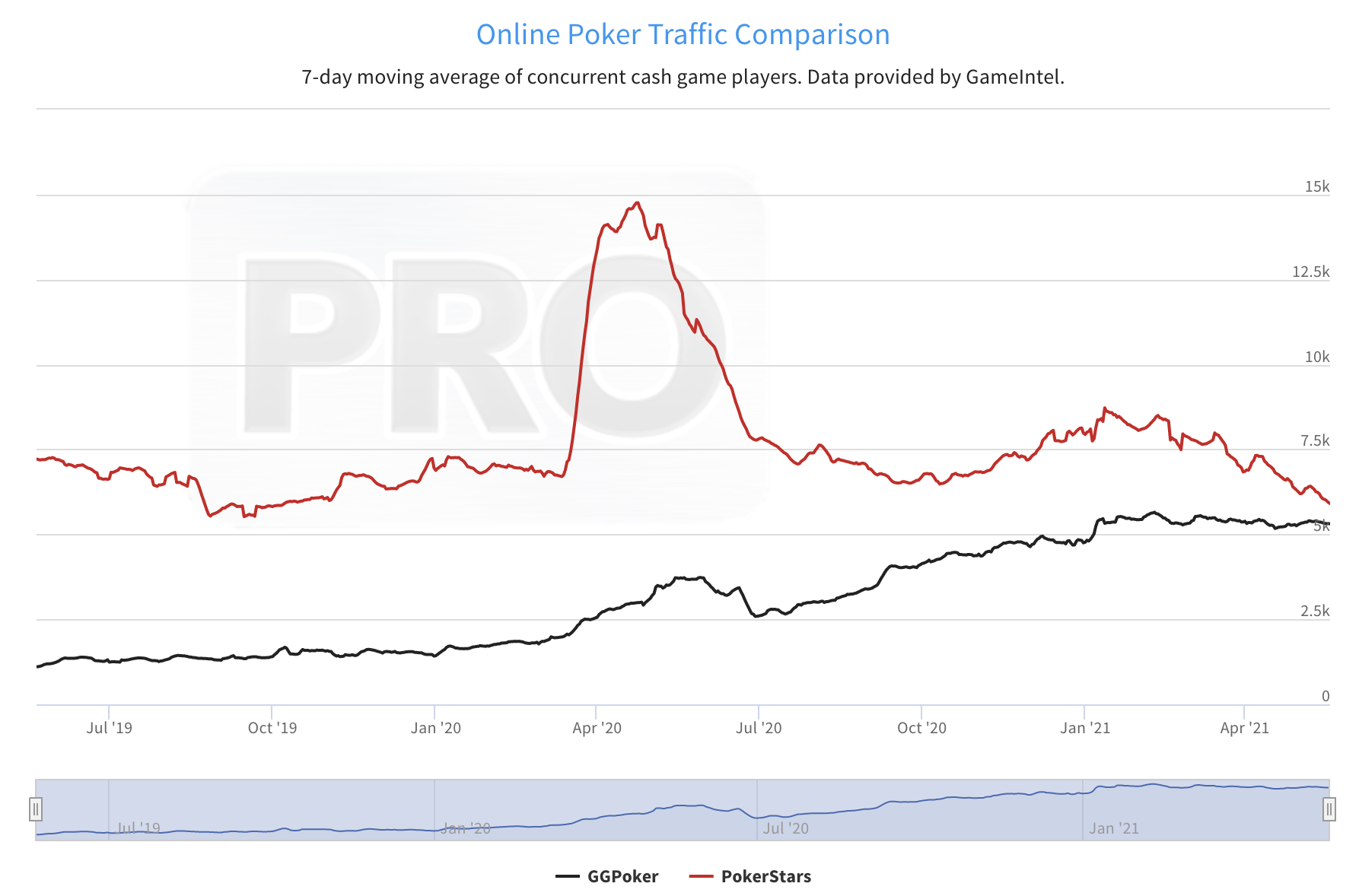 Fifteen Years of Ruling the Roost

Besides a brief spell of partypoker atop the cash game traffic back in 2006, PokerStars has reigned supreme on the global online poker market. After the passage of UIGEA, which led to the withdrawal of partypoker from the market, it lost its biggest competitor.

Full Tilt Poker later emerged as a major contender. It peaked at more than 19,000 concurrent cash game players in late 2009. However, their peak was still some 9,000 away from overtaking PokerStars.

In comparison, that gap is much bigger than the absolute number of concurrent cash game players on global market leader PokerStars right now.

After the rise and fall of Full Tilt, which ultimately became a skin of PokerStars and officially closed its doors earlier in 2021, no other operator has come even remotely close to threatening the market leader, until now.

One year ago, at the start of the COVID-19 pandemic, PokerStars was riding high on the sudden mini-boom and peaked at 12,104 cash game players. GGPoker was in a distinct second place with 3,709.

Fast forward exactly one year, and the gap has decreased to just over 600 players in May 2021. PokerStars still remains atop with 5,940 but GGPoker has already reached 5,318.

The fastest growing online poker site right now has been the only operator to enjoy a steady rise throughout the past two years. There were some bumps along the road, but the only real setback came in the summer of 2020—when it saw a standard seasonal dip.

Otherwise, the network has seen consistent gains and there is no ceiling is in sight.

GGPoker dominated the headlines of the online poker scene in 2020 and it has continued on the same path in the new year as well.

In February, Poker Industry PRO made five predictions for GGPoker for the year. Three have come true already: WSOP Online Bracelet Events will return on GGPoker, major product innovation has continued, and the operator has recruited female ambassadors.

Of the remaining two, one is that the operator will launch online sports betting, which still seems reasonable for 2021. The last one—that it will overtake PokerStars in cash game traffic—is still very much on the cards. If the current cash game traffic trends continue in the months to come, GGPoker seems destined to topple PokerStars and set yet another milestone.

In the battle of giants during the busiest month in the history of online poker, GGPoker reigned supreme with $176 million in prize pools during the 2021 GG Spring Festival. It was the biggest online series for the operator so far and they followed that up with an extension of the partnership with the World Series of Poker.

Not only will GGPoker host the WSOP Online Bracelet Events once more this summer but they will also run satellites for the WSOP Main Event in Las Vegas for the first time ever.

All current signs lead to one conclusion. GGPoker is here to stay and will do its utmost to take over the top spot from PokerStars.

GGPoker PokerStars
By Christian Zetzsche
Article published on May 21, 2021.
pokerfu.se/ynbb

GGPoker has taken yet another step to diversify its game offering with the launch of the new Battle Royale: A blend of…

While the 2020 COVID pandemic was a boon for the online poker industry, it was understandably horrible for live poker….

GGPoker Closes in on PokerStars in Global Cash Game Traffic

The online poker market is heating up as market leader PokerStars is facing serious competition for the top spot,...

Players on the global GGPoker network now have a new game option to choose from. For the first time, 6-handed versions…

Despite similar tournaments and the same $100 million top-line figure, the schedule of the WSOP Super Circuit Online…

Poker is an ever-evolving game, and that progress has become clear to us here at pokerfuse as we reflect on a decade of…