WSOP Flip & Go Bracelet Event: Everything You Need to Know

Live players will get a chance at a bracelet this year in an innovative live version of GGPoker’s popular Flip & Go game.

There are many ways the 2021 World Series of Poker (WSOP) will look different from any other year in the series’ 52 years of history, but one of the biggest will be the inclusion of a Flip & Go bracelet event.

The WSOP Flip & Go bracelet event runs on October 10 as part of the modified schedule for the live portion of the 2021 WSOP. While online poker has been heavily influencing the WSOP schedule for several years, the process accelerated over the pandemic-fueled strangeness of the last 16 months, and the first-ever live running of this new event is just another example.

Sponsored by GGPoker, the new event will be a fast-paced affair with a significant amount of luck involved. There is more skill than a traditional flipout-style game, as players are dealt 3 cards to start and choose one card to discard.

Notably, this is where the WSOP version differs from the online version. In GGPoker’s game, all cards are dealt face up and players discard a card before the flop. But in the WSOP Bracelet event, this discard happens after the flop has been dealt.

The new game is part of a larger live WSOP, returning this year after a hiatus last year while COVID-19 ravaged the world. While in the past the live series has typically started in late May and run through July, with the world barely coming out of pandemic restrictions now, this year’s 88-bracelet live festival has been moved to the fall.

The total schedule this year makes the 2021 WSOP the biggest series ever. The 88 bracelets represent one of the biggest live series ever, with only 2019’s 90 live bracelets coming in higher.

When combined with the domestic and international online components, more than 150 bracelets will be handed out in 2021. That is more than double the number awarded in 2017 and more than four times as many as 2013.

Flip for a Bracelet

It is not unusual for the WSOP to try out new formats in any given year, but the new Flip & Go format may well be the most unusual to hit the live felt at the venerable poker festival. The WSOP have tried pineapple-style poker in the past, notably in a 2017 Circuit even from Rotterdam.

However, this appears to be the first time a flip-style event has been run during the live series with a bracelet at stake.

Flip continue until a winner is decided on each table, and that table champion immediately moves forward into the second round and the money. From there, the tournament plays out with a traditional no limit holdem format to determine the paid spots and winner.

There are two Day 1s scheduled for this event, giving players the opportunity for a second chance. Day 2 will commence with all of the Day 1a and Day 1b winners coming together for the final money round.

Merging of Live and Online Games

There has always been a divide between live and online poker, but in recent years the games have begun to merge together. That trend was accelerated by the pandemic closures, which forced many live series to scramble for an online format in the past year.

Online poker has adapted by adding real name requirements in some events, moving the online operators closer to live games. Conversely, the addition of online formats like flips has changed the face of live poker as well. 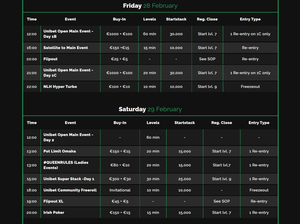 While this event is the first time a bracelet has been offered in a flip-style format, more general flipout games invaded live poker long ago. Before the pandemic, Unibet included a flipout tournament at its Unibet Open live stops, and many poker rooms across the globe offer flip-style sit and go satellite games for larger tournaments.

The addition of the third card and the post-flop discard adds an element of skill to a format that is otherwise purely luck-based. Equally, moving to a traditional structure for the money phase of the tournament means that the bracelet winner will need to be both lucky and good.

There are many ways the 2021 WSOP will be unique in the history of the biggest poker festival on the planet, but the inclusion of a Flip & Go bracelet event is surely one of the biggest. The live portion of this year’s WSOP runs from September 30 through November 23, with more live events following in Europe afterwards. The Flip & Go bracelet event runs on October 10.

Online poker players in Pennsylvania are currently enjoying some massive value at new market entrant WSOP PA, which has…

The international leg of the 2021 WSOP Online on GGPoker has entered its final stretch.

The WSOP 2021 Online Bracelet Events on GGPoker are gearing up for the $5,000 Main Event. Throughout the first 23…

In what may be a first among international poker operators, World Series of Poker (WSOP) partner GGPoker is now giving…