Twitch has rapidly become a key marketing avenue for poker operators over the past few years, and many operators have taken the plunge to sponsor a team of Twitch streamers. 888poker is the latest operator to jump into the Twitch pool with its own stream team.

888poker is a bit late to the game with regard to Twitch, as many other operators have had teams on Twitch for a while now. The new Twitch team debuts with five members from Canada, the UK, and Portugal. The operator has been active on Twitch since late April this year with its 888pokerTV channel featuring David Tuchman and Nick Wealthall.

Twitch.tv is an online streaming service that began its life as a gaming-specific streaming platform Justin.tv back in 2007, created by Justin Kam and Emmett Shear. It was renamed Twitch in 2014 as it became the preeminent platform for streaming online gaming content.

It was a platform that poker players took to with a passion, starting with old-guard streams like Jason “JCarver” Somerville, and Jaime Staples. Since then, the Poker category at Twitch has grown by leaps and bounds as new players, and then operators, jumped into the game. 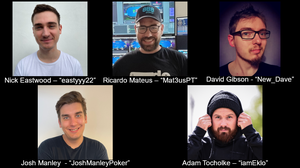 The new team was officially announced on July 1 with the full line-up, but there have been hints of the development for a few weeks now. The first hint of the new team came during the XL Spring Series when Tuchman and Wealthall spilled the beans while streaming the action on the new 888pokerTV channel.

They announced inaugural member Josh “JoshManleyPoker” Manley from the United Kingdom, but there were no further details available after the brief mention during the stream. Manley streamed the Spring Series action, and has been a regular streamer for the operator since then.

The 888poker team is the latest Twitch team entry from operators. Rival GGPoker has had GGTeam for a while, featuring names like Daniel Negreanu, and Bertrand “ElkY” Grospellier, however it also features TwitchSquad, a team of streamer-specific poker names like Kevin “KMart” Martin, Lukas “Robin Poker” Robinson and Pamela “Pamsi” Balzano.

In the midst of the pandemic last year, Unibet joined the fray as well with its own team, headlined by Unibet ambassador Ian “Iany” Simpson. The team was rounded out to five members early in 2021 with the addition of cash-game streamer “ValueHeavy” and Emily “riskitforabiscuit” Glancy.

PokerStars has its popular streamers in Lex Veldhuis, Ben Spragg, and Fintan Hand, leaving 888poker as one of the final operators to not have a Twitch team. It was not completely absent from Twitch, as popular Brazilian ambassador Vivian Saliba has been streaming a lot of action for the operator recently, and the new 888pokerTV has firmly established the brand on the platform, but this new team represents the first fully branded Twitch team for 888poker.

Check out the full announcement from 888poker, and catch all the new poker action on 888poker’s Twitch Poker StreamTeam.

888poker’s 20th year in operations is coming to a close as 2022 winds down and we prepare for the new year. As…

As 2022 draws to a close, the 20th-anniversary celebrations of 888poker are also coming to an end. The operator burst…