Even with BetMGM PA, Borgata PA and the newly launched WSOP PA trying to cut into its lead, PokerStars PA still reigns supreme in the market.

PokerStars PA kicked off operations in late 2019, and enjoyed a monopoly through April of 2021. Now, with two fresh competitors in the market, it seems like the market share the operator secured in its monopoly phase is holding strong.

While traffic at PokerStars dropped a bit in May after BetMGM PA jumped into the market, and it dropped again slightly with the launch of WSOP PA two weeks ago, neither drop was even close to damaging PokerStars’ lead.

In the most recent data points, WSOP and BetMGM/Borgata barely manage 50 concurrent users between them. Market leader PokerStars, on the other hand, hasn’t dropped below 250. 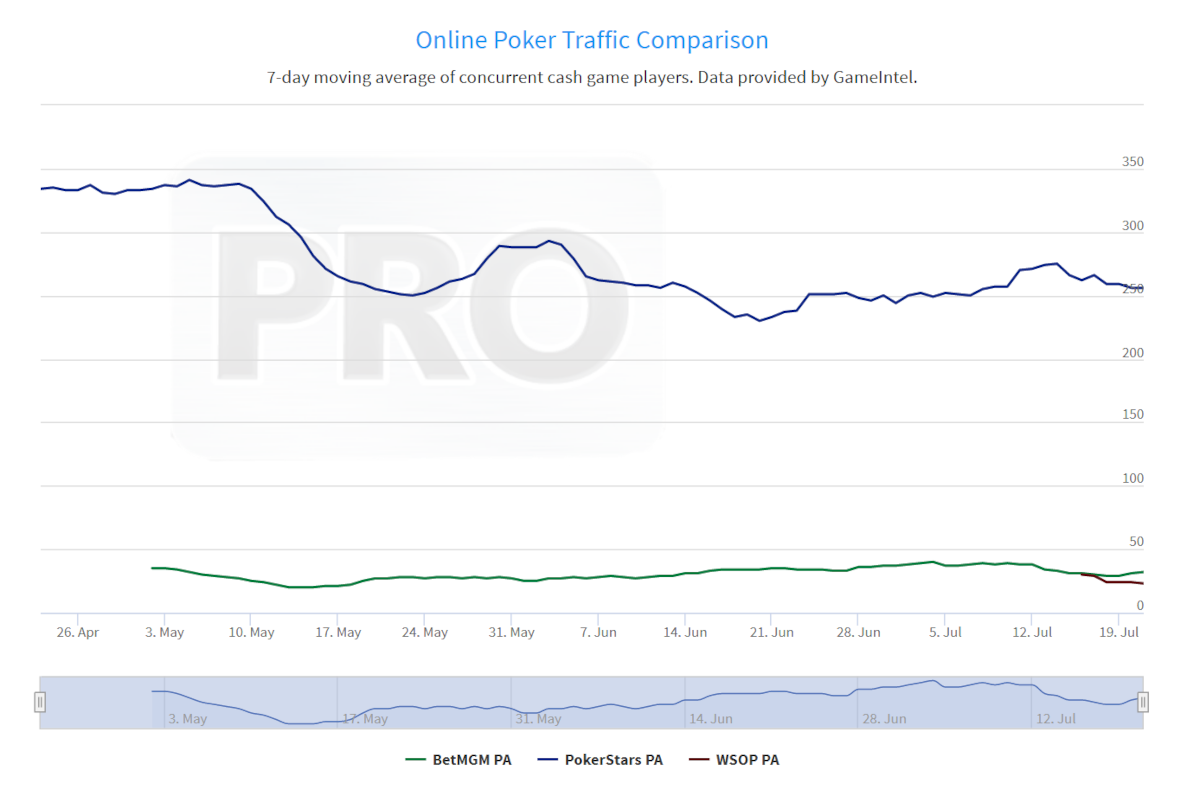 PokerStars PA: Pick one of two great welcome offers
Play one cash hand, Get $50!
NO CODE NEEDED
Deposit match bonus up to $600!
STARS600

PokerStars Dominates Both Sides of PA

PokerStars PA’s dominance in cash is matched by dominance in revenue as well. While there is no financial data for WSOP PA yet, as it has only been open for a couple weeks, early data including BetMGM PA (Hollywood Casino) and Borgata PA (Rivers-Philedelphia), the rooms launched in late April using partypoker software, show PokerStars with almost a 4:1 lead in revenue.

While PokerStars has consistently good numbers on the cash side, much of its success comes from solid tournament results, including some big series. It is perhaps no surprise that the biggest US market for PokerStars population-wise also generates the biggest prize pools, but a recent example showed PokerStars PA collects more than its population might warrant.

In the most recent running of Half Price Sunday, PokerStars PA collected almost $95,000 across three half-price events this past Sunday. Michigan, a state with about 75% of the population of Pennsylvania, collected just 60% of the prizes of PA on the same games.

That comes after some very successful Spring Championship (SCOOP) series for PokerStars across its three markets, and puts the operator in a strong position in the larger US marketplace. PASCOOP in particular, which ran in May, smashed the $2.1 million guarantees with $2.6 million collected. That was second only to the Covid-fueled 2020 version of the same tournament in the list of biggest games ever in the US market.

Gold Bracelet Cloud on the Horizon?

PokerStars’ lead seems unassailable in the PA market at the moment, with solid leads in all metrics. But at least one competitor has a wildcard to play—in the form of World Series of Poker (WSOP) Gold Bracelets.

Shortly after launch, WSOP PA made the huge announcement that players on the site would get a shot at Gold Bracelets. When it launched with a segregated player pool, WSOP PA players were locked out of the big bracelet series happening for NJ and NV players on the WSOP/888poker US Network.

Then WSOP announced a PA specific bracelet series with eight extra bracelets on offer. Buy-ins range from $400 to $3,200, but with bracelets on offer, it is very likely to drive PA players to WSOP PA for a shot at one of the most coveted prizes in poker.

Whether a bracelet series is enough to put a dent in the PokerStars PA juggernaut remains to be seen, but so far, nothing has come close to matching the industry leader in Pennsylvania.

Bounty fans are about to get a real treat from PokerStars US. Starting May 13, Pennsylvania, New Jersey, and Michigan…