The Pennsylvania poker market has recently expanded from a single operator to a total of three now, with the recent entry of WSOP PA. Within a month of its launch, the new room has now grabbed second place in cash game traffic in the market, taking over from BetMGM PA.

On July 13, WSOP PA joined PokerStars, who operated a monopoly in the state from late 2019 through early 2021, and BetMGM, who went live as the second operator in PA in late April of 2021 with its sister room, Borgata PA.

PokerStars PA enjoyed the benefits of its long monopoly period in the state, holding the clear lead in the market, but the two recent competitors had hopes of cutting into that lead.

The effort has only been partially successful. Neither of the two newer operators in PA have been able to make a real run at PokerStars’ top numbers. Instead, they have been fighting it out between themselves for second and third place.

PokerStars Pennsylvania sits atop the cash traffic list with an average of around 250 concurrent users, and while the numbers fluctuate, there is only a single day in recent tracking where it has posted lower than 220 users. The two newer operators, on the other hand, have struggled with traffic, and are yet to post numbers higher than 50 concurrent users.

However, that battle of the bottom has recently reversed itself. When WSOP PA first launched, it was having troubles matching even the modest numbers of competitor BetMGM PA. This past week, the newcomer jumped past BetMGM for second place in the numbers.

WSOP PA: The world’s most recognizable poker brand is now fully legal and regulated for online poker in Pennsylvania!
Claim your bonus package »

WSOP PA launched into a market dominated by the huge presence of PokerStars, and from the start it was clear the immediate battle was for second place rather than first. The lead of PokerStars is practically unassailable for the moment, but there is a real battle for runner up.

The main difference in recent days was the announcement of the Pennsylvania bracelet series. When WSOP PA went live in July, the one glaring omission was access to the WSOP.com domestic bracelet series in July running on the WSOP network serving NJ and NV.

The operator moved quickly to address that deficiency by announcing eight extra bracelets for Pennsylvania residents in a series that was exclusive to that market. The latest cash game surge comes in the wake of that announcement, and it seems clear that the appeal of the bracelet games has also injected some life into the cash traffic at the newest PA poker site. 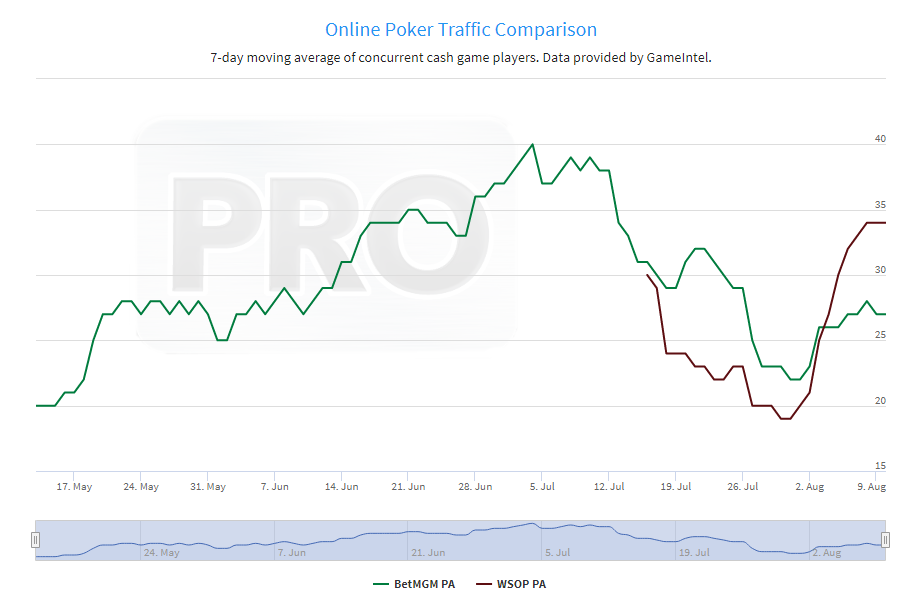 The recent spike in traffic that sent WSOP PA into second place coincided perfectly with the run-up to the Pennsylvania Online Bracelet Series (POBS), and comes after steady drops in traffic from the launch of the site. While the current numbers are still low with less than 40 concurrent users, they still show a marked improvement from the low point of just 19 concurrent users at the end of July.

It remains to be seen if WSOP action in Pennsylvania can do any more to cut into the massive lead of PokerStars PA. When it is included in the numbers, the bottom of the market clearly flattens out and its obvious how much of a gap there is to make up between first and second. 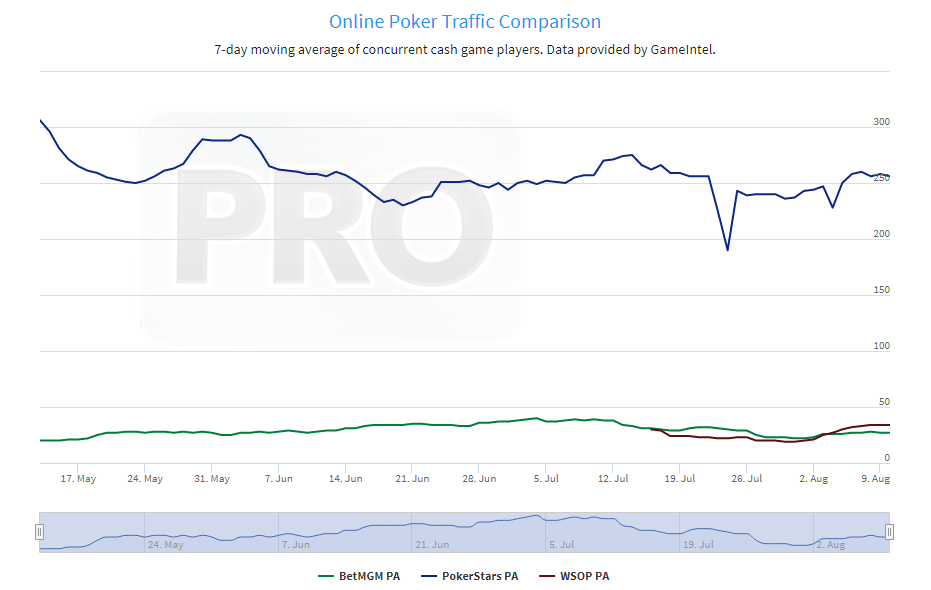 Beyond the time spent enjoying monopoly access to the PA poker market, PokerStars’ success largely comes on the back of huge tournament series like PACOOP and PASCOOP which drive traffic across the site.

The WSOP brand is world-famous for tournament poker, and the ability to offer bracelets and rings to local customers could be a huge bonus for WSOP PA in its attempt to close the gap with the market leader.

With cash traffic on the rise, and the POBS in full swing now, there may never be a better time for WSOP PA to try to take a bite out of PokerStars’ market share.

While players and the industry anxiously wait for the full WSOP 2023 schedule to be revealed, let us look at what the…