In what may be an industry first for an international operator, players can register for the WSOP Main Event from the GGPoker client.

In what may be a first among international poker operators, World Series of Poker (WSOP) partner GGPoker is now giving the option to buy into the WSOP Main Event from the comfort of their own homes.

Rather than standing in in the real world, players can now simply buy-in from the GGPoker client for $10,000 and be pre-registered for the big show before they even leave their house.

The Main Event may be the biggest game in town when it comes to tournament poker. The $10,000 buy-in isn’t the biggest buy-in in the game, and the field size isn’t the most players of any game, but no tournament in the world comes close to cachet of the WSOP Main Event. Any big poker tournament win can change a player’s life financially, but a Main Event win transforms a player into one of the biggest names in the game overnight.

“With our Road to Vegas satellites in full swing alongside the WSOP Online 2021 series, GGPoker players are showing great enthusiasm for all things World Series of Poker,” said Paul Burke, Head of PR at GGPoker, in a statement to pokerfuse.

“We’ve also recently introduced a WSOP 2021 Main Event direct buy-in feature in the GGPoker app, so players now have an additional option to secure their seat at the world’s most prestigious live tournament,” he added.

While the live nature of the Main Event is one of the reasons for its mythical status, there have long been online paths to the Big Show. That chance to get in cheap from home is appealing to players. Perhaps the most famous WSOP Main Event win of all time, the 2003 win by Chris Moneymaker that jumpstarted the first poker boom, started from an online satellite win.

What is more rare is the chance to buy into the Main Event directly in the online world. Players in the US don’t even appear to have the option to get into the game from an online lobby, as confirmed by Kevin Mathers, the official online voice of the WSOP.

Direct Buy-In from the GGPoker Client

The Road to Vegas features satellite paths to the Main Event, with a full package up top worth $12,500 that includes the Main Event buy-in as well as expenses to make it a true Main Event experience. But the package requires players to play through at least some part of the satellite tree.

With the direct buy-in option, players can now avoid all that, as well as avoiding the line-ups at the registration desk in the real world come November. In a normal year, avoiding the lines would already be plus-EV, but in this end-of-pandemic year, the value of avoiding lines is even higher.

Plenty of Satellite Paths to the Main Event 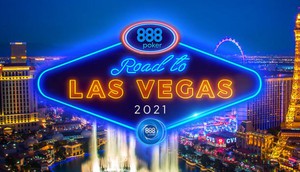 GGPoker isn’t the only place players can play their way into the Main Event. As the official US partner and software provider for WSOP.com in the US markets, 888poker is also offering its own Road to Las Vegas promotion to international players.

The $1,050 Road to Las Vegas qualifier has $13,000 packages up top including the Main Event buy-in and some expenses. Interestingly, the operator skirts around actually naming the tournament, but it is pretty clear what the “$10,000 tournament buy-in” portion of the package is meant to refer to.

American players aren’t left out in the cold either. Players on the newly launched WSOP PA also have a chance to satellite into the Main Event. Even rival BetMGM got into the game in July, offering Las Vegas Ultimate Super Satellites in both Michigan and New Jersey.

What is unusual in the GGPoker offering is the new direct buy-in option. It appears to be the only place players can buy-in directly through a poker client. As Mathers confirmed, even the US clients lack that ability.

Just one player from China appears to have bought in direct so far. It remains to be seen how many more players will take advantage of the direct buy-in option, but it seems to be a unique feature for GGPoker.

The World Series of Poker (WSOP) 2021 was already shaping up to be the biggest ever, but it just got bigger with the…

After the first half of the International Leg of the 2021 WSOP Online Bracelet Events on GGPoker, there was little…