The World Championship of Online Poker is in full swing at PokerStars with total prizes nearly 25% above the guarantees.

The end of summer 2021 has been very busy on the online poker streets, with big series running on several poker clients right now. On PokerStars, players around the world have been turning out for the 2021 World Championship of Online Poker (WCOOP).

With the series now well into its final week, more than 200 tournaments are already in the books, and so far it appears to be a runaway success. Up to this point, WCOOP had just under $60 million in guarantees attached, but the games have actually given away almost $73 million.

Could WCOOP 2021 be Biggest Ever for Operator?

The progress so far points to some tantalizing possibilities for the series as a whole. With almost $73 million collected already, if the series continues on that pace, it could end up with $123 million in total prizes across the games.

If it hits that number, that would be the biggest WCOOP in history, and the third largest series in the operator’s history. By guarantee alone, it promised to be at worst the fifth biggest series in PokerStars’ history, but given the current pace, it looks near-certain to hit third place. 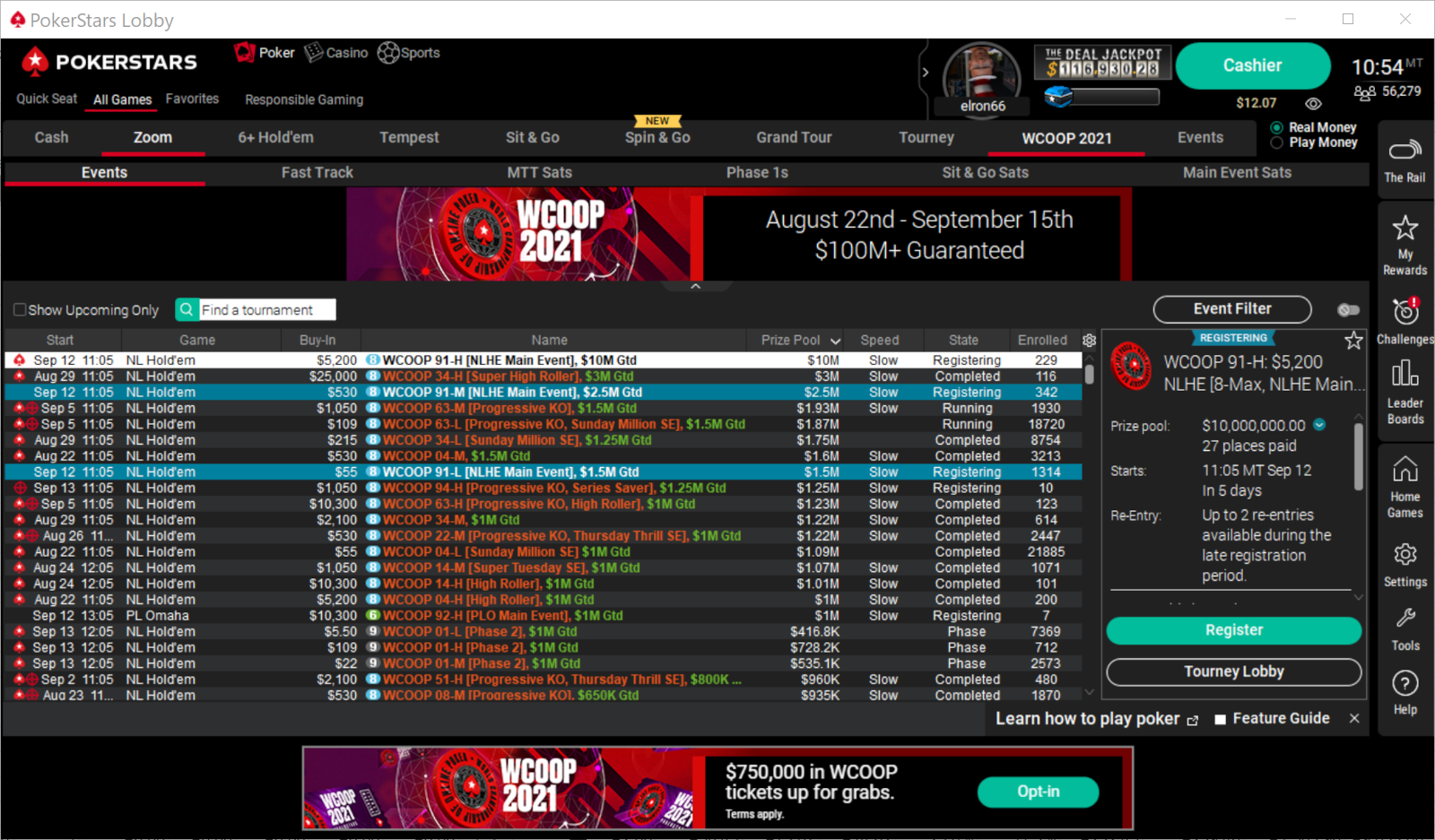 Third currently belongs to the $105 million collected by SCOOP 2019. Just based on the remaining guarantees of more than $1 million, WCOOP 2021 is guaranteed to be at least $114 million in total at this point, so third place for this series seems to be a lock, though predictions show it could easily go higher than $120 million by the time the last hands are dealt.

On the other hand, the top two places do not seem to be in jeopardy. The massive $185 million SCOOP 2020 may never be matched again, and even the $137 million from this year’s SCOOP seems out of reach at this stage of WCOOP 2021.

At the current pace, PokerStars looks set to give away between $120 and $125 million for WCOOP this year, if the remaining events have similar turnouts. A good chunk of the remaining guarantees is locked up in the $10 million Main Event, so turn out for that one may well be a key indicator for the series as a whole.

It has not all been rosy so far at WCOOP, as 30 tournaments have overlayed. However, the series still looks to be making a profit, with fees in other events more than making up for the near-$500,000 shortfall.

There are still around 100 games left in the series, so lots of chances to get into the games. WCOOP 2021 runs through September 15, with the $5,200 Main Event running September 12 with $10 million guaranteed.

Largest SCOOP and WCOOP Stats Since 2012

PACOOP 2021 on PokerStars Pennsylvania: Everything You Need to Know

Fall is approaching, and in online poker that means one thing: PokerStars will be running its flagship Championship of…

PokerStars Championship Planned for All Three US Markets

PokerStars’ marquee tournament series brand, the Championship of Online Poker (COOP), is coming to the US once again,...