Entrants to this years Main Event are up 9% making it the second largest tournament in WSOP history.

The World Series of Poker has announced that their iconic Main Event has attracted 7,874 entrants making it the biggest tournament the WSOP has held since 2006 and the second largest in their history. 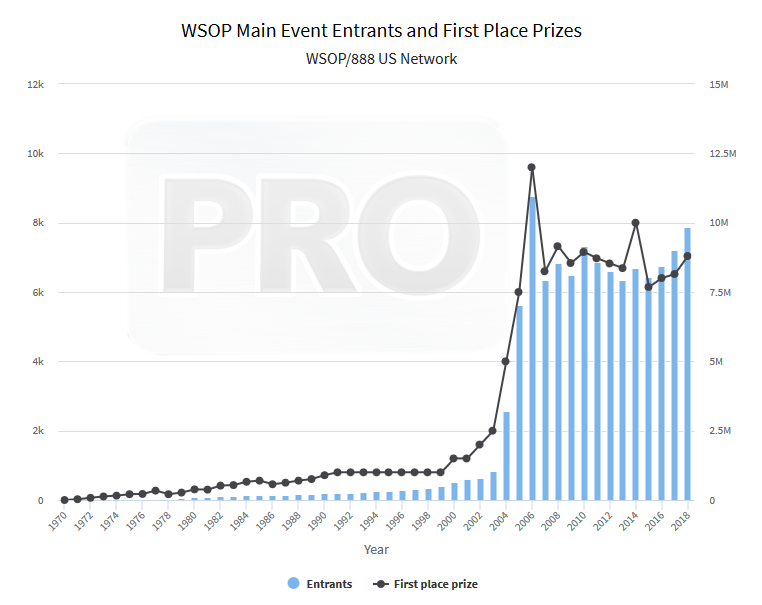 The huge turnout for the Main Event shows that the WSOP still has pulling power despite the poor turnout figures for its usually popular Colossus event. This year the tournament only attracted 18,000 entrants, making it 27% down on last year.

However, with 65 of 78 events already having played out during this years WSOP, the stats show over $210 million has been paid out in prize money and 100,000 entrants have taken part. It is on course to break records.

For the first time in WSOP history that it was possible a for bracelet to be won outside of Nevada. The tri-state shared player pool between New Jersey, Nevada and Delaware made this possible. And, indeed, it happened: Event #47 was won by New Jersey native Matthew Mendez, making him the first person to ever win a bracelet in another state.

All four online events saw a high turnout with over 6000 entrants. This meant $4.5 million was paid out in prize money in online events alone. Event #10 also made WSOP history, attracting 3000 entrants, making it the biggest field for a WSOP online event.

Play continues in the Main Event on Thursday for the first of three Day 2s. Players then combine for a single Day 3, on July 7, and they will play every day until a champion is crowned.

2017 Main Event winner Scott Blumstein was back in Las Vegas to defend his title, but busted on day 1, but he has some wise word to say on the matter.

What it shows is how strong mentally you have to be to play this game at the highest level… I knew the right answ… https://t.co/Khz0fAUHm3— Scott Blumstein (@SBlum2711) July 03, 2018

You can keep up to date with chip counts here on the WSOP site.