Exclusive: PokerStars Unique “All In Cash Out” Feature Coming to All No Limit, PLO and 6+ Games

Currently in testing for play money, PokerStars is expected to roll out the variance-reducing feature to its real money tables.

PokerStars has quietly rolled out a new feature on its .NET platform that has the potential to have a significant impact on the game of online poker once it is deployed for real money.

The All-in Cash Out feature allows cash game players in an all-in situation with no more action pending to forgo playing out the remainder of the hand in exchange for a cash payout equal to their equity in the pot minus an administrative fee equal to 1% of their equity.

Earlier this month, PokerIndustryPRO.com was first to report that the new Cash Out feature was in the works at PokerStars as part of a major new product update and correctly predicted the mechanics of the new innovative feature.

How Does All-in Cash Out Work?

To illustrate how All-in Cash Out works, consider the following: If a player is all in on the flop with a hand that has 80% equity in a $100 pot, that player would have the option to take $79.20—calculated as 80% of $100 minus 1% of the equity or $0.80—instead of taking the result of the hand after the Turn and River have been dealt. Note that the 1% fee is based on players’ equity and not the entire pot.

If an all-in player opts to cash out their equity and their hand beats the other hands in the pot, the proceeds of the pot will be collected by the house. Player also have the option to continue to play the had out as normal regardless of their opponents’ decision about cashing out of the hand. It appears that players’ decisions on whether or not to cash out will be depicted in real time at the tables for all opponents to see.

Choosing the Cash Out option does not affect the outcome of the hand itself —the probabilities of each hand winning the pot does not change.

Players have the ability to disable the All-in Cash Out option by simply making that selection in the Settings menu.

All-in Cash Out Coming to All NLHE, PLO and 6+ Tables

Currently the new feature is offered at selected 6-handed No Limit Hold’em tables, but according to the rules posted on the .NET site, future plans include making All-in Cash Out available across all No Limit Hold’em, Pot Limit Omaha and No Limit 6+ Hold’em cash games. The feature will presumably be rolled out for real money in select regions following the play money trial on the .NET platform. 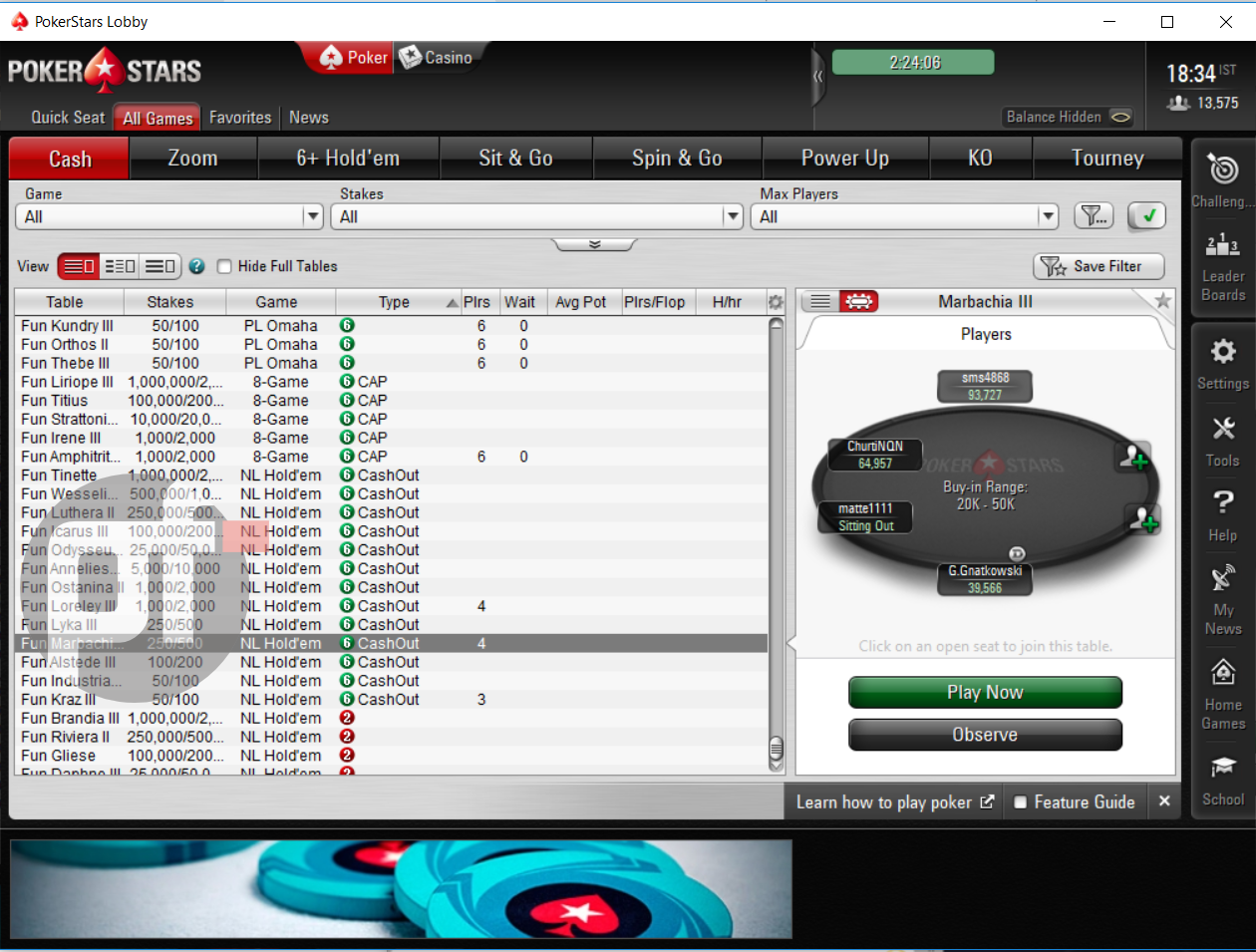 On the tables where All-in Cash Out is available, PokerStars has removed the option to Run It Twice, another feature that caters to those players looking to reduce the effects of variance at the tables. One key difference between Run It Twice and All-in Cash Out is that the former requires all remaining players in the hand to agree for the feature to be triggered, whereas the latter can be chosen on an individual basis without affecting the outcome of the hand for other players.

The real money deployment of the new feature is expected to happen across the .COM market, but All-in Cash Out is not expected to debut in ring-fenced markets such as the Southern European market (comprised of France, Spain and Portugal) or New Jersey any time soon.

The ring-fenced markets are some of the most highly regulated jurisdictions in the world and approval for the new feature can take a significant amount of time to make its way through regulated testing environments. In some cases, the new feature may require a new type of license, or it could be prohibited altogether because opting to cash out one’s equity could be viewed as a non-poker wager as it is no longer peer-to-peer.

How All-in Cash Out Can Change Online Poker

Insuring your hand against variance is a part of poker that was made famous on television shows that featured high stakes games along with some of the biggest personalities in poker.

The idea of protecting one’s equity even made its way into the online game in 2012 when a company called InsuredPlay provided a third-party service to insure cash game hands against bad beats. InsuredPlay was available for play on PokerStars, Full Tilt, iPoker and partypoker, but undisclosed “difficulties” caused the company to shutter its doors some sixteen months after it had launched.

But even a small change deployed across the majority of cash games on the world’s leading online poker site stands to have the potential to cause significant changes to the way players approach the game.

Reducing the amount of variance in online poker cash games could cause players to shove all-in more often, as they will know that even if they are way behind in the hand, they will have the option of cashing in their equity to avoid being felted. An increased amount of shoving all-in could create a more exciting gaming environment

The ability to realize your equity in any all-in situation may also detract from the excitement of big bet poker games. No Limit and Pot Limit variants are popular in part because of their exciting nature, therefore, reducing the risk and variance could have the opposite effect and also reduce the fun.

Presumably, PokerStars will do its due diligence and thoroughly test the feature and players’ reactions before rolling it out for real money to the majority of its customers.

In a rare oversight for PokerStars that led to the overcharging of rake for its New Jersey and Pennsylvania players,...

Flutter on the Line for $1.3 Billion After Unexpected Kentucky Supreme Court Ruling in PokerStars Case

Flutter Entertainment, the current owner of PokerStars, could be on the line for $1.3 billion after the Kentucky…

Football sensation Neymar Jr has inked a deal with PokerStars, bringing him back into the operator’s fold after…

PokerStars PA has announced the return of its largest online poker tournament in Pennsylvania.