Every Sunday, PokerStars is giving away a Platinum Pass to the PSPC in Barcelona next year for just a $2 buy-in.

The year-long process by PokerStars of awarding Platinum Passes is in full flow and more than a dozen of players have already won their way to play in the second edition of PokerStars Players No Limit Hold’em Championship (PSPC).

Scheduled to take place in August 2020, the record-breaking PSPC event will head to a new location in Barcelona, Spain and will run as a part of the European Poker Tour (EPT) Barcelona festival.

Like last year, PokerStars is once again committed to giving away Platinum Passes each worth approximately $30,000 to hundreds of players via various routes including both live stops and online promotions. Each Platinum Pass includes a €22,500 seat in the PSPC, travel and accommodation expenses.

If you are looking for a way to win your way to the PSPC from the comfort of your home, then you are in luck as PokerStars is giving away passes every Sunday on its online poker client through its Mega Path satellite system. And we feel that it is your best shot at winning a Platinum Pass and perhaps become the next Ramon Colillas.

The Mega Path qualifier has four steps and it starts with a Spin & Go, progresses to on-demand Sit & Gos, moves through a weekly MTT and then finally leads to a PSPC qualifier tournament.

The first step is basically free of cost as players can earn a Step 1 ticket through opening Stars Rewards chests that award tickets to a Spin & Go. Players must finish first in this three-handed tournament to progress to Step 2.

Upon completing Step 1, they move to Step 2 which is a Sit & Go. Alternatively, players can enter into Step 2 directly by paying a $2 buy-in. These Sit & Go’s are winner-take-all where only one out of 27 players make it to Step 3 valued at $50.

Step 3 is played every Sunday and guarantees 15 seats to the final Step of the Mega Path—another weekly Sunday tournament that guarantees one €26,500 Platinum Pass and seven seats to Step 3.

It is worth noting that the last two stages are ticket-only entry, requiring players to work their way through at least three steps to get there. This should increase the number of casual, recreational players who make it through to the PSPC.

The Mega Path promotion kicked off on September 8 and is slated to run till December 1 per the UK webpage, though the promotion could be extended into 2020.

To give you an idea of how great your chances of qualifying via Mega Path, the first Mega Path PSPC qualifier on September 8 got only 19 runners causing an overlay of $18,000. A week later, the same qualifier had 25 registered entrants, falling short of its guarantee by $12,000.

A similar promotion is also being run on PokerStars French and Spanish markets. 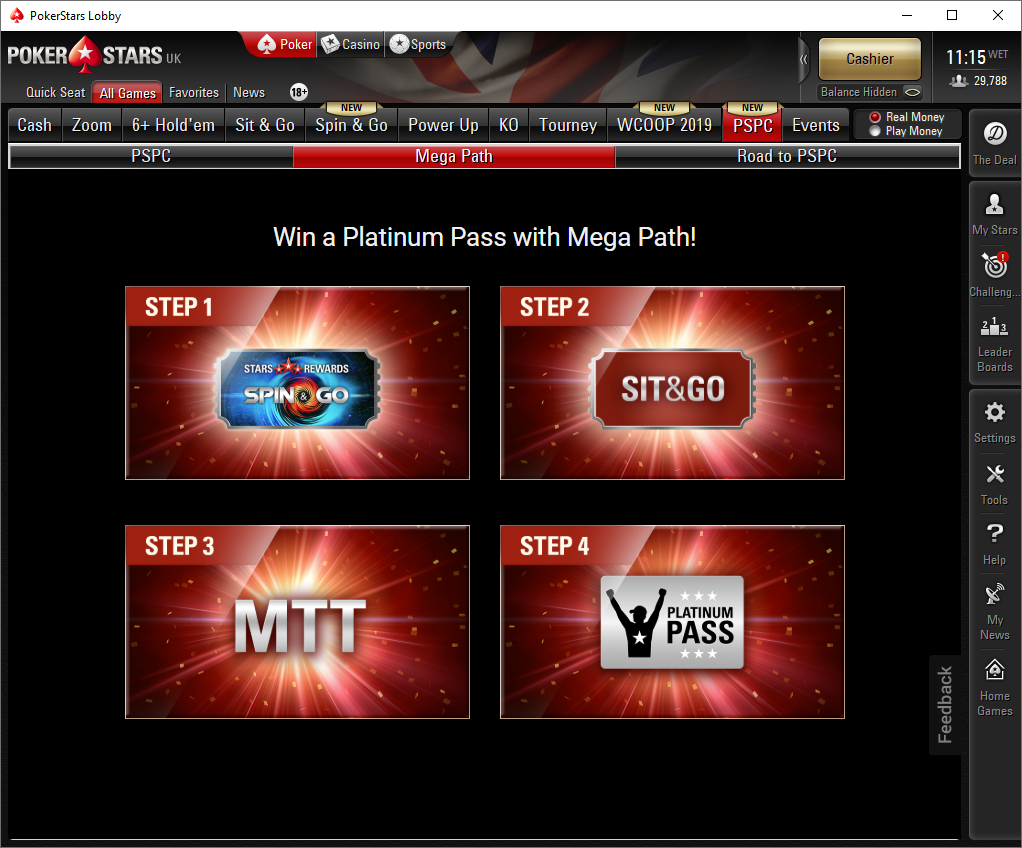 For its second outing, PokerStars’ Marketing Director, Eric Hollreiser told Pocketfives that the company is aiming for a much bigger and better PSPC. The inaugural event, held earlier this year, drew over 1000 total entries—320 of which won their way via the Platinum Pass system, PokerStars’ audacious year-long promotion that saw $8 million in prize packages given away through a myriad of paths.

In total, the PSPC generated in excess of $26 million, making it by far the largest single tournament PokerStars has ever hosted live.

PokerStars will now hope to repeat this year’s performance and look to break the record again.

PSPC 2021 in Barcelona: How Platinum Passes Were Awarded in 2020, and What Might Come This Year

2021 Update: PokerStars suspended the PSPC 2020 in Barcelona due to the coronavirus pandemic. The operator is hoping to…

While we are still five and half months away from the start of the PSPC, the outbreak of COVID-19 that has plagued the…

Everything You Need to Know About PokerStars PSPC 2020